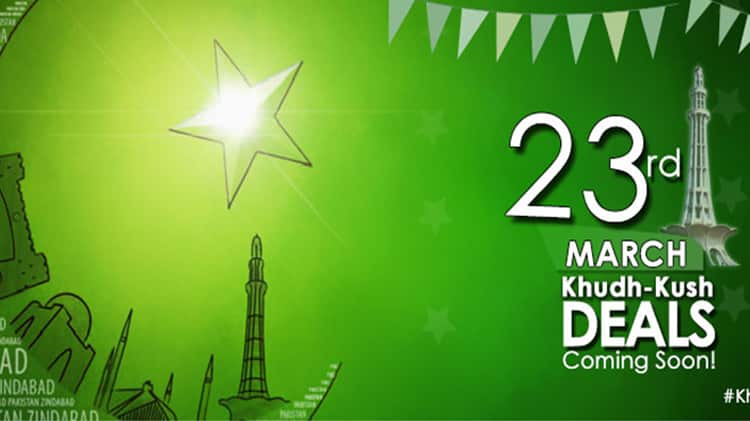 Khudh-Kush is a word that has inflicted deep wounds in the heart of every Pakistani since its very first use. Though it has many meanings and multiple facets with respect to history, when it comes to Pakistan, it always ends up resonating terror and mass destruction.

Recent incidents have made the word itself a huge terror. Revisiting childhood, we find that many approaches were taken to strike terror into the hearts of children to ensure they hit the hay at the appropriate time. However when it comes to adults, things aren’t that easy but somehow the word ‘Khudh-Kush’ never fails to raise an eyebrow and guarantees fear each time. And when talking about Pakistan this word has taken a permanent position in the vocabulary for yellow journalism.

With all this already, penned in the pages of history with red ink, taking up #KhudhKush as part of a campaign in these uncertain times was not an easy decision, said a statement issued by an e-commerce store that is calling its Pakistan Day deals as Khudkush Deal. “And yet, we maintain, true its form, destruction and devastation, we have taken this opportunity to redefine this destruction with all the positivity and good vibes possible”, read the statement.

This Pakistan Day – 2017, 24HOURS.PK is offering some of the greatest deals in the history of eCommerce in Pakistan, company claimed.

The brand brings to you a unique deal concept with the tag: #KhudhKushDeals, deals where consumers enjoy up to 98% off on a special selection of products – promising 100% value to customers and garner only love, and gratitude for the brand itself.

Over 1500+ products have been self-sacrificed by the brand with every product priced precisely at Rs. 23 Only.

Products including a Card Mobile Holders, VR Boxes, Space Powerbanks, Smartwatches, Men’s Trimmers, Hair Dryers, Hair Straightener & Curlers, Tool Kits, Wallets, Earphones, and many, many more. Not only this – the brand is also sacrificing the concerned delivery cost. It states that the products would not only be priced at Rs. 23/- only but will also be delivered ‘Free of Cost (FOC)’ where no hidden charges will be applicable.

How to Avail Deals:

After considering the campaign, Cinepax Cinemas are also participating in this event with 24HOURS.PK and the main event would be tickets from 24HOURS.PK with free delivery and in Rs. 23/- only.

With such a huge step forward, 24HOURS.PK on one hand has not only tried to soften the threatening impact of the word #KhudhKush but also on the other hand through combining the word with this deals’ concept, it has given the customers out-there a chance to enjoy the best and “Insane Discounts” ever conceptualized in the eCommerce landscape of the country.

Though the concept is new and bold, but such efforts are always helpful when healing the social fabric of the society in which the elements that hold together the very existence of human civilization undergo a positive change and create nothing but sheer excitement and joy.

Here are some of the deals that will be available on March 23rd: