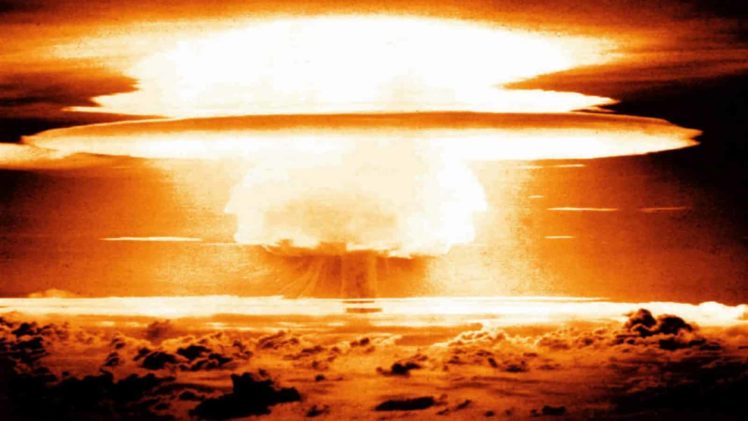 Nuclear weapons are considered to be the most destructive force in a country’s military arsenal. At the beginning of the 20th century, world wars led to massive improvements in weapon technology, with the advent of jet planes, tanks, machine guns etc. However, the atomic fission bomb was the biggest game changer which eventually led to the end of a world war.

One would expect the aftermath of Japan nuclear bombings, post World War 2, to be a warning to stop this. Alas, it didn’t faze anyone and super powers across the world continue to improve and add to their existing nuclear weapon stockpile.

Today, a country’s military strength is measured by the nuclear weapons it possesses. Today, we take a look at where Pakistan stands as a nuclear power, when compared with the rest of the group.

The first ever Treaty on the Non-Proliferation of Nuclear Weapons, also known as the non-proliferation treaty was opened for signature in 1968 and entered into force in 1970. The treaty put a damper on the nuclear arms race and promoted peaceful usage of nuclear technology. (India, Pakistan, Israel, North Korea and South Sudan are not part of the treaty).

Due to increasing number of nuclear weapons in US and Russia during the cold war, a Strategic Arms Reduction Treaty (also knows as START, signed 1991, ratified 1994) was signed between the two countries. This was followed up by START II (never put into force) and the new START treaty (signed 2010, into force in 2011). 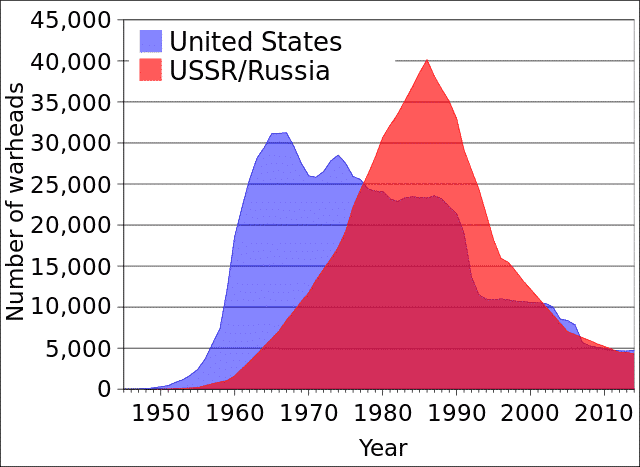 Fast forward to 2017 and the total number of stockpiled nuclear warheads keeps on increasing, thanks to non signatories of the Non-proliferation treaty.

Here’s how Pakistan compares with other countries that have nuclear weapon stockpiles (data from Stockholm International Peace Research Institute). 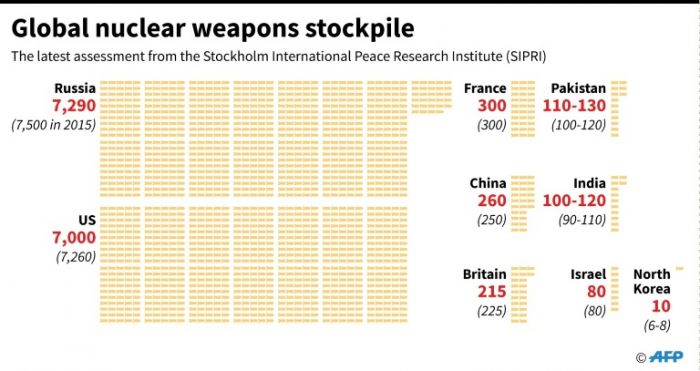 The situation is indeed alarming with the US and Russia having bigger stockpiles than the rest of the world combined. Russia and the US have been decreasing the number of nuclear weapons they have, but the total is still much higher than everyone else.

France, China and Britain follow US and Russia with 300, 260 and 215 nuclear warheads respectively. Among these three, Britain was the only one that decreased the total number of nuclear weapons since 2015 (215 now compared with 225).

Pakistan and India’s nuclear stockpiles are similar in number with Pakistan (110-130), 6th on the list, having a narrow lead on its neighbor (100-120). Since 2015, both countries have increased the number of nuclear weapons they have.

Israel comes in second to last with 80 warheads and North Korea with 10.

History of The Nuclear Arms Race

US was the first ever nuclear power, it was also the only one that used it in a war as well. US was followed by Russia which rapidly advanced its nuclear weapon capabilities. It reached its peak with the “Tsar bomba” (Tsar is the Slavic version of “emperor”) which was tested in October 1961 and was the most powerful human-made explosion in history.

It had a theoretical maximum yield of 100 megatons of TNT but it would’ve caused too much nuclear fallout and would have made it impossible for the plane carrying the bomb to escape the blast radius. The bomb that was tested had a yield of 50 megatons, 1,570 times the combined energy of the bombs that destroyed Nagasaki and Hiroshima.