Pakistan Stock exchange continues to bleed, with the KSE-100 index losing -220.71 points, or – 0.46%, by the close of the trading session to reach 47356.60 points as all intra-day gains were wiped off as uncertainty over the Panama case verdict kept investors at bay.

Shares of 362 companies were traded. At the end of the day, 118 stocks closed higher, 216 declined while 28 remained unchanged.

Volumes were led by Commercial banks, Cement and Technology & Communication sector. 63.04 million shares were traded by the end of the session, with a total worth of nearly Rs6.20 billion. 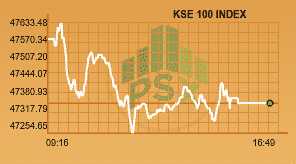 Crude oil is currently being traded at $51.49

Wall Street shares reversed a rally and slipped on Wednesday, with the Dow posting its largest intraday downside reversal in 14 months, after the Fed minutes showed the central bank was concerned the stock market may be overvalued.

Earlier, in Asia, markets ended mixed, with the Shanghai Composite in China closing up about 0.3%, while Japan’s Nikkei sank 1.5%.