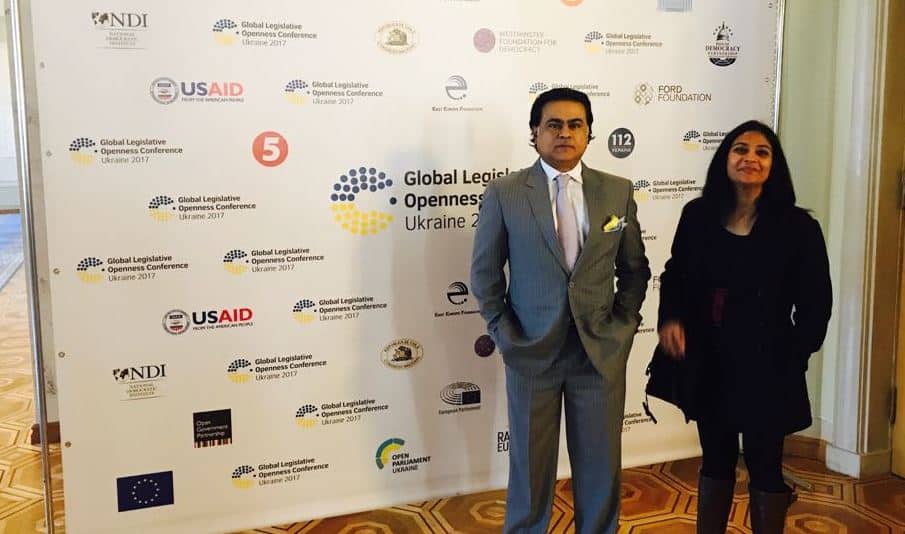 Sheba Najmi, Founder, Code for Pakistan (CfP), was invited to address the Ukranian parliament as a keynote speaker on Saturday at the second Global Legislative Openness Conference. Opened by the Ukrainian Prime Minister, Verkhovna Rada, Ukraine’s national parliament, hosted the conference on May 19-20 in Kiev.

Along with Najmi, the other two keynote speakers were Pat Cox, Former President, European Parliament and Francis Maude, Former Minister for the Cabinet Office and Paymaster General, UK Government who commissioned an open government initiative in the UK.

Given Code for Pakistan’s success, Najmi was invited to share her learnings around public innovation and openness. Drawing on her experience leading CfP, she focused on building a culture of innovation in government.

“In my keynote, I spoke about how to engage with civil society in a collaborative manner, how to employ citizen-focused design methods, and how such approaches to governing can strengthen relations between the government and citizens,” Najmi said.

The conference focused on legislatures and technology, collaboration with civil society, fake news and misinformation, and more. There was also a focus on parliaments and the Open Government Partnership, which Pakistan recently joined in December last year, as the conference is organized by OGP’s Legislative Openness Working Group, co-chaired by NDI (National Democratic Institute).

“It’s a tremendous honor and a privilege to be invited to address the Verkhovna Rada and global members of parliament, government officials, and civil society leaders.”

Sheba Najmi is not just involved with Pakistan’s civic innovation and civic tech space but also globally. Earlier this year, Najmi was invited as keynote speaker at the Girls in ICT conference in Kosovo.

Sheba Najma founded Code for Pakistan in 2013 after a tremendously encouraging response to Pakistan’s first civic hackathon in Karachi at T2F, with the support of the late Sabeen Mahmud (T2F) and Jehan Ara ([email protected] and The Nest i/o).

Code for Pakistan is a non-profit that builds a civic innovation ecosystem to increase citizen engagement and improve public service delivery, by supporting the development of open source mobile and web applications and conducting civic hackathons. In partnership with the Khyber Pakhtunkhwa Information Technology Board (KPITB) and the World Bank, CfP also runs a Civic Innovation Fellowship, currently in its third year. More than 1000 people applied for the fellowship, of which 20 were selected to work within various provincial government departments and help enhance public service delivery. Code for Pakistan also runs Civic Innovation Labs (CILs) in Islamabad and Karachi. Each lab is made up of dedicated community volunteers who meet regularly to collaborate with local government, civil society and non-profits organisations, and the media on technology, data, policy, and design projects that strengthen their communities.