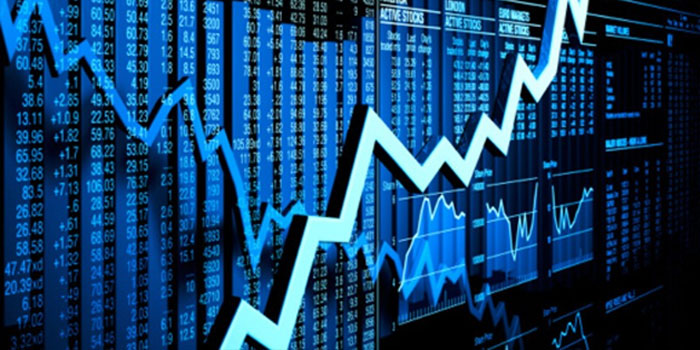 Investors are snapping up a U.S.-listed exchange-traded fund dedicated to Pakistani stocks before the nation’s entry into MSCI Inc.’s emerging-market index next week.

There are signs overseas funds are edging back. Foreigners bought the most Pakistani shares in a year on Tuesday, turning net buyers for only the fourth time this month, amid fledgling optimism the nation may lure a wider class of investors after regaining emerging-market status for the first time in nine years. 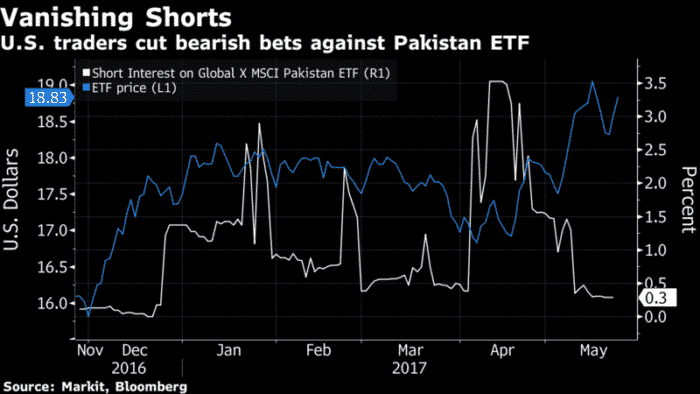 Global X MSCI Pakistan is on course for the biggest monthly inflow since it started two years ago after investors added $11.8 million from May 1 through May 24, data compiled by Bloomberg shows. In the past six weeks, more than $1 million short positions have been cut as bearish bets were pared to the lowest figure since December.

“Pakistan is going from being a big fish in a small pond to a small fish in a big pond,” Jay Jacobs, director of research at Global X, said by phone from New York. “The upgrade will put the country on people’s radars, whereas they wouldn’t have had the desire to invest before.” The fund’s assets have quadrupled this year to a record $48 million, as per available data.

The benchmark KSE100 Index has registered gains over seven of the eight years since Pakistan’s downgrade to frontier market status in late 2008. Prime Minister Nawaz Sharif averted a balance-of-payments crisis with help from the International Monetary Fund, and is using loans from China for infrastructure projects. The gauge jumped 46 percent last year, Asia’s best performance, and headed for a fresh record on Thursday.

Still, not all investors are bullish about the impending re-classification.

Mark Mobius, executive chairman of Templeton Emerging Markets Group, said last week it will continue to treat Pakistan as a frontier market because the country hasn’t improved its corporate governance. Global investors have pulled a net $213 million this year, adding to outflows of $334 million in 2016, amid a graft probe surrounding Sharif. 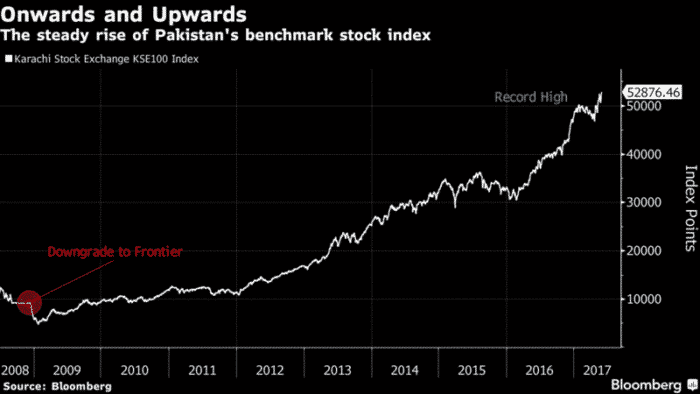 “Frontier investors have had a great run in Pakistan and are now moving into markets like Argentina and Vietnam, which have outperformed,” said Ali Khalpey, chief executive officer frontier markets at EFG-Hermes Holdings SAE, the Cairo-based investment bank. “As for ETF inflows, there are investors who want to buy the MSCI upgrade trade as they expect good performance. An ETF gets you the exposure very quickly.”

Whereas Egyptian investment firm EFG-Hermes formally became part of the Pakistan Stock Exchange as a broker on Monday. It is for the first time in nine years that a foreign brokerage house has begun its operations in Pakistan.

Khalpey said he expects about $500 million to flow into Pakistani shares on May 31, a day before the MSCI inclusion. The single-day inflow would top the $532 million the nation received in all of 2010, the data show.