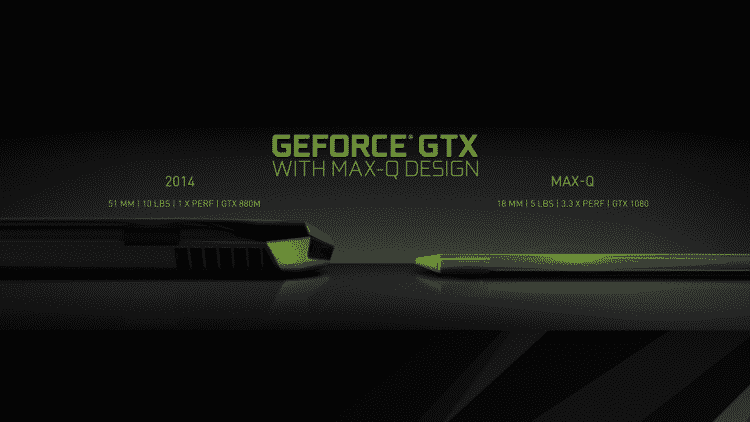 So far, it has been accepted that in gaming laptops, the price is not the only compromise you make. It takes some serious levels of dedication to carry a heavy machine in your backpack all the time. With its recent announcement however, Nvidia is aiming to deliver the best of both worlds.

Nvidia has announced a new Max-Q design platform at the Computex 2017, which can prove radical as far as laptop designs are concerned.

Gaming Laptops the Size of A Macbook

Normally, a GTX 1080 on a laptop adds heft to its design and requires more air vents for smoother operation. Max-Q will slim the notebooks down to 17.9 mm width, weighing just 2.3 kg. About the same thickness as a MacBook.

This is a major improvement over GTX 880 era laptops, swhich used to weight up to 5 kg with a 51 mm width on average.

Currently, laptops with similar aesthetics from the likes of Razer have featured a GTX 1060 at most. With GTX 1080 being made available to such designs, users will see performance boost of up to 1.7x times.

Max-Q will allow machines up to half the consumption of a normal GTX 1080 to be made. Nvidia says that this will require collaboration on a deeper level between the company and its partners, since all the effort of the construction goes towards noise control and heat dissipation.

The first such machine to come at Computex is the ASUS Zephyrus, which offers a GTX 1080 and 120Hz G-Sync monitor at under 18 mm waistline and 39 dBA of fan noise. The design lifts up slightly when opened to allow for additional airflow. The laptop is said to bring a boost of 60% in terms of graphical power over a PS4 Pro.

There’s also going to be an optional Whisper Mode, which likely turns down graphics in less action-packed game sequences. The implications of thin design on battery life is yet to be noted.

One issue which is yet to be addressed is that of pricing. While the PS4 Pro offers one of the best values in the industry (at least hardware-wise), the competing options from companies such as ASUS will likely cost a lot more.

The gaming laptop segment is one of the fastest growing in the entire industry. It may have finally received a much-needed boost to compete against gaming PCs.