The Pakistan Stock Exchange ended the day on a flattish note, with the benchmark KSE-100 index gaining 23.70 points, or 0.05pc, by the close of Tuesday’s trading session to reach 50144.63.

The market remained in range-bound throughout the whole trading session while closing in green. While investors breathed a sigh of relief following yesterday’s recovery, overall participation remained flat and failed to expand in tandem with the change in sentiment. 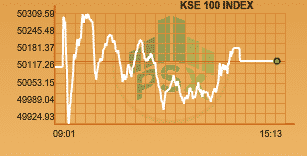 Overall, volumes plunged to 231 million shares, While in KSE 100 index 89.84 million shares changed hands with a total worth of nearly Rs 10.29 billion.

Cement sector witnessed a bullish trend owing to increase in domestic cement consumption by 11% to 37.589 million.

Shares of 365 companies were traded. At the end of the day, 152 stocks closed higher, 193 declined while 20 remained unchanged.

Whereas, PSX has launched IPO for 20% of its stakes today in line with its demutualization process that already saw a sell-off of the bourse’s strategic 40% stakes to Chinese-led investors and NCCPL had successfully settled PKR 54bn worth of trading transactions on May 31, 2017; four times more than the average trading value in the last six months.