The benchmark KSE-100 index of the Pakistan Stock Exchange remained hugely volatile throughout the whole trading session closing in green. The market opened negative but made a good recovery while closing in green.

KSE-100 index gained 399.24 points, or 0.84 pc by the close of Tuesday’s trading session to reach 48071.04. The market was hugely volatile due to panic by the local investors as Pakistan Stocks fell due to looming Nawaz Sharif appearance for JIT probe. Pakistan’s Supreme Court in April ordered a probe into the criminal allegations leveled against the family. Sharif is scheduled to appear on June 15 before an investigative team, which has already questioned his sons, according to Information Minister Marriyum Aurangzeb. 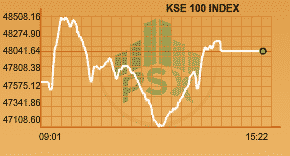 Shares of 383 companies were traded. At the end of the day, 160 Stocks closed higher, 207 declined while 16 remained unchanged.