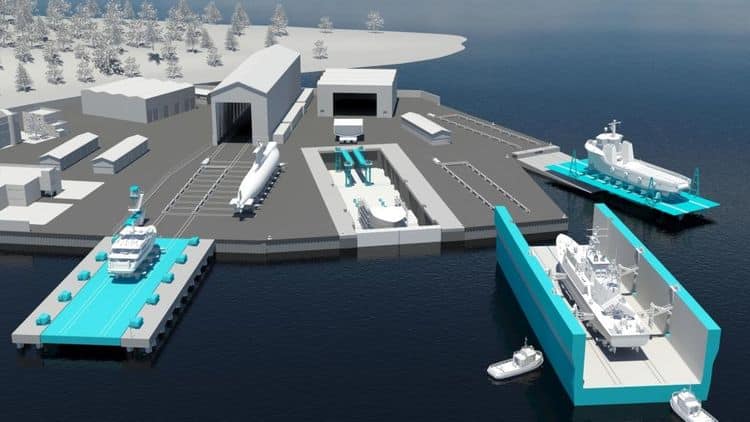 Pakistan’s Karachi Shipyards & Engineering Works (KSEW) has signed an agreement with Norwegian ship design and building firm, TTS Group. The US $29.8 million deal is for the implementation of infrastructure modernization in the form of a 9,000 ton Syncrolift, ship lift and transfer system.

In an official press release, TTS Group has confirmed that the design and development work will be carried out in Norway while the manufacturing will take place in China and Europe. KSEW is set to receive the system during the first half of 2019.

Syncrolift is a system which enables shipbuilders to lift ships from sea level to land level. TTS Group’s “advanced hydraulic transfer trollies” will move ships onto and from repair and production sites on land.

Compared to dry docks, the Syncrolift enabled sites can handle as many as 10 ships, in turn increasing efficiency and volume compared to shipyards using standard drydocks. The Syncrolift for KSEW will be able to lift ships weighing up to 9,000 tons.

Pakistan’s Ministry of Defence (MoD) set up the acquisition of a lift and transfer system as a priority for KSEW in 2017.

The Syncrolift system will be used to lift ships from sea to land, but unlike a drydock system which is fixed, a connected to a rail-linked network would place ships onto one of the 13 in-land workstations using 30 winches (motorized trollies). Pakistan will also get a transfer-of-technology agreement which will enable after-sale maintenance to be managed locally.

The rail transfer system will then move ships from the workstations to the ship-lift system and lay them at sea.

Syncrolift is registered trademark of TTL Group and is a complete system which comprises of a ship elevator, trollies and the rail-transfer system. The company already holds 70 percent of the market share. TTL Group claims its ship lifting system is faster than competitors and will improve further with its new FastDocking products.

MoD states that “[the acquisition will] increase business capacity and efficiency of ship turnover by three times.” The system will enable KSEW to improve with regards to its commercial aspects, especially in the ship repair market. The upgrade for KSEW will also allow full support to “all present and future national maritime and defence objectives.”

It is also expected that the system will enable domestic construction and launching of submarines “for the first time”.

KSEW was previously tasked to assembled maritime vessels, like the MILGEM corvette. Modernization to its infrastructure, like the Syncrolift acquisition, will enable it to complete its current projects and undertake future projects. This will, in turn, be helpful for Pakistan Navy which will be able to modernize its fleet at reduced costs through local manufacturing facilities and raw material.

Pak Navy’s next generation submarine program – the Hangor class submarines – is considered to be the trigger behind this venture. KSEW will be managing 4 out of the total 8 submarines. The steel-cutting (inauguration) of the first Hangor-class submarine, built by the KSEW, is scheduled for October 2020 while the remaining are to be in the hands of Pakistan Navy by 2028.

While the construction work will be carried out locally, the KSEW will still import steel, mechanical and other critical components from other countries. However, it is sure to push Maritime Technologies Complex (MTC) to start on in-house ship design and development programs. In the long run, this could enable MTC to take on the role of a contractor like STM or CSOC by developing original designs and then acquire components from manufacturers.

On the other hand, KSEW’s modernization could enable foreign designers to pitch custom solutions to Pakistan Navy. In short, it could help reduce overall costs for the naval forces.