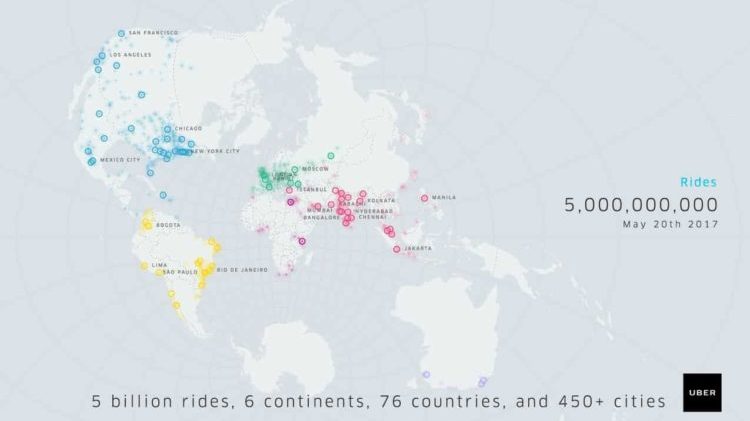 Uber has much reason to celebrate – as it announced crossing the 5 billion worldwide trips mark recently.

To make this happen, 156 trips started simultaneously at 7:29:06 am GMT, in 24 countries across six continents, in cities including Dubai, Moscow and the capital city of Pakistan – Islamabad.

In late 2015, Uber made headlines for crossing the 1 billion trips mark. Six months later, the company reached 2 billion rides, and over the last 11 months Uber has witnessed incredible growth to reach an impressive combined 5 billion rides.

Uber started in 2010 to solve a simple problem: how do you get a ride at the push of a button?

At Uber we are proud of our partner-drivers who have made it possible for us to achieve this milestone. It’s amazing that out of the 156 simultaneous trips taken worldwide, two were in Pakistan, one being in one of our newest markets; Islamabad. – Safee Shah, GM of Uber Pakistan

Muhammad Kashif, who completed one of 156 trips that started simultaneously, and which took place on UberAUTO, said:

I am feeling very happy, and there is no way I can express it with words.

Umar from Islamabad expressed how he felt about the occasion and said:

A special thanks to Uber for giving us this award, and it is great to use the Uber app.

Uber is committed to growing its network, providing safe, reliable, and affordable transportation and improving the mobility and transport infrastructure of the cities in which it operates, while also focusing on building new and innovative features for riders and drivers.