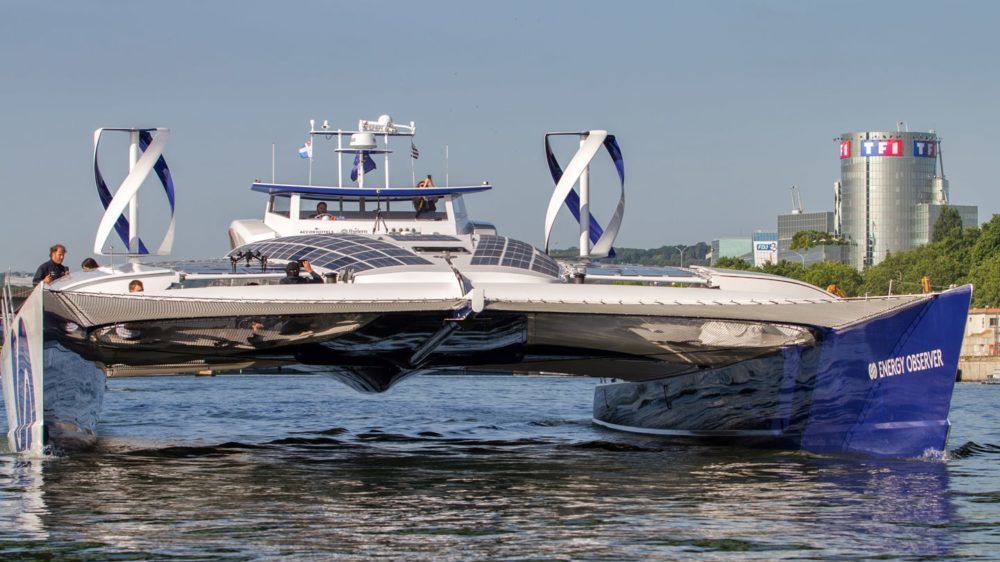 After Solar Impulse, a solar powered aircraft that flew around the world in 2016, a self-fueling boat is scheduled to start its journey around the world this weekend. The “Energy Observer” will be setting sail from Paris.

Energy Observer is a 34-year-old ex-racing vessel. It was built in 1983 but has now undergone extensive modifications and is now ready to make a 6-year voyage around the world.  It is an environment-friendly, emission free vessel.

What Powers The Boat?

The Energy Observer runs on the multiple power sources. None of these sources pollute the environment in any way. The first one is solar power. The boat is covered in solar panels spanning 30-square meters (1,400 square feet) on the top of the vessel. The second power source is wind.

There are two huge turbines attached to the rear of the 30.5-metre (100-foot) long catamaran. The third and the most innovative method which will be used at night or when there is no wind is hydrogen from the sea water by electrolysis. Hydrogen will be extracted from seawater and will be stored in onboard tanks.

Jérôme Delafosse, the leader of the expedition, said,

Hydrogen is the best way to do this because it’s very light and the efficiency of hydrogen is three times more than just fuel.

Along with this, the boat is also equipped with a kite sail which will tug the boat along, as an alternative power source. When the propeller is rotated electrical energy is produced in the motor. The process is opposite of the normal propulsion method in which electrical power is converted to mechanical power.

“When the kite sail is operational, the forward motion of the boat will make the propeller rotate,” said Didier Bouix, who helped design the boat’s power systems.

Why Will it Take 6 Years?

The Energy Observer is scheduled to stop over at 101 destinations in 50 countries across the time span of 6 years. The reason it will be taking so long is that the sailors want to hold demonstrations in the countries they will be stopping at. In these demonstrations, they will spread awareness about the alternative energy sources which will result in zero greenhouse gas emissions.

The only problem which might cut the trip short is the amount of money it will require annually. It is estimated that it would require US$4.6 million a year to keep the boat on the sea. Let’s hope that the voyage team is able to get enough sponsors and are able to complete their journey.