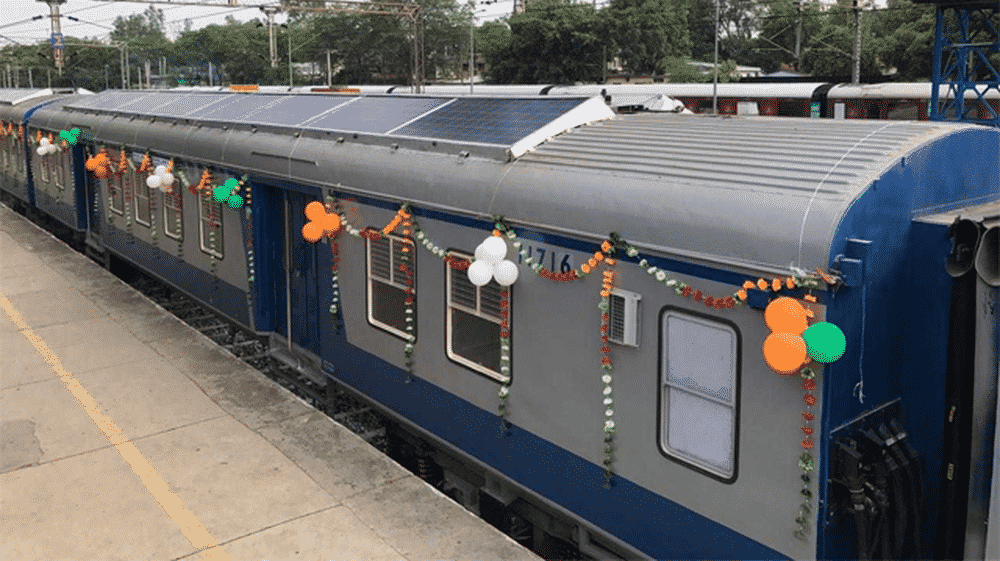 With Tesla leading the shift from fossil fuels to renewable alternatives in the west, countries in Asia are also adhering to this changing trend. With the recent announcement of solar projects, Pakistan has also joined the race of increasing its renewable energy capacity.

India too has shifted its focus on the subject and has recently rolled out its first train with solar panels installed on the rooftops of coaches.

Make no mistake, the train’s engine will still be powered by diesel. What has changed is the source of energy for the electrical appliances inside the coaches themselves.

Lights, fans, entertainment systems and other small electric powered devices will be shifted to the renewable power source. This may seem insignificant but in reality it does make a massive difference.

Sixteen panels are installed on a single coach. A train with six of these solar powered coaches can save roughly 21,000 liters of fuel worth approximately 19.5 lac Rupees.

This is just with a single train mind you. If this system is widely adopted, it could save millions of rupees and also would be great for the environment.

The managing director of Jakson Engineers – the firm behind the technology – says that the installation of these panels is not as simple as just slapping them on the rooftops and be done with it.

It proved to be a challenge for the engineers to fit the panels in such a manner that they could resist the high resistive forces due to the train’s speed of over 80 kmph.

The retrofitting of a single coach with this solar energy system costs a significant 14.7 lac Rupees. In other words, applying the system on six coaches makes up for the initial cost in less than 5 months.

The added benefit of less pollution and greater power savings in the long run clearly outweigh the initial cost.

Pakistan is also working on its railway system’s refinement. Recently a plan to install solar powered traffic signalling system was announced by Pakistan Railways which can alert train drivers of any activity on the track 3.5 Km beforehand.

This is good step forward but we require bolder moves. Moves like the one India just made. Our engineers are more than capable to do the same if not more. A step like this will truly breath a new life in Pakistan Railways. However, the tracks, coaches and the whole system needs a lot of work before the department can truly take off and become profitable.