The market opened positive and continued to gain until midday, before all intra-day gains were wiped off over the Pakistani Rupee’s deficiency and some companies’ results. 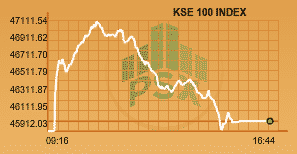 The market added 1201 points in the intraday today. From the high of 1199 points index, the market went down to bottom flat.

According to financial analysts, the Pakistan Stock Exchange was facing tumult for the past two months due to the Panama case in the apex court. However, after the Supreme Court verdict the market has become stable.

Total of 386 companies changed hands where 255 advanced, 114 declined and 17 remained unchanged.Volumes are getting better since the Panama verdicts as it boosted the investor’s confidence as the overall shares traded were 316 million shares. While in KSE 100, 150 million shares changed hands with a net worth of Rs 14.79 billion.

Top gainers of the market were SNGP, ENGRO, OGDC, MARI and HUBC whereas the laggers were HBL, FFC, PPL, UBL and INDU.

Habib Bank Ltd has now received all regulatory approvals in Pakistan and Kenya for transfer of HBL branches in Kenya to Diamond Trust Bank Kenya (DTKB) which will be effective from August 1 2017. HBL will receive an additional 4.18% shareholding in DTKB taking its shareholding to 16.15% from 11.97%.
After this news HBL script went down to the floor and closed at RS 236.26 (-5%) by the end of the trading session.