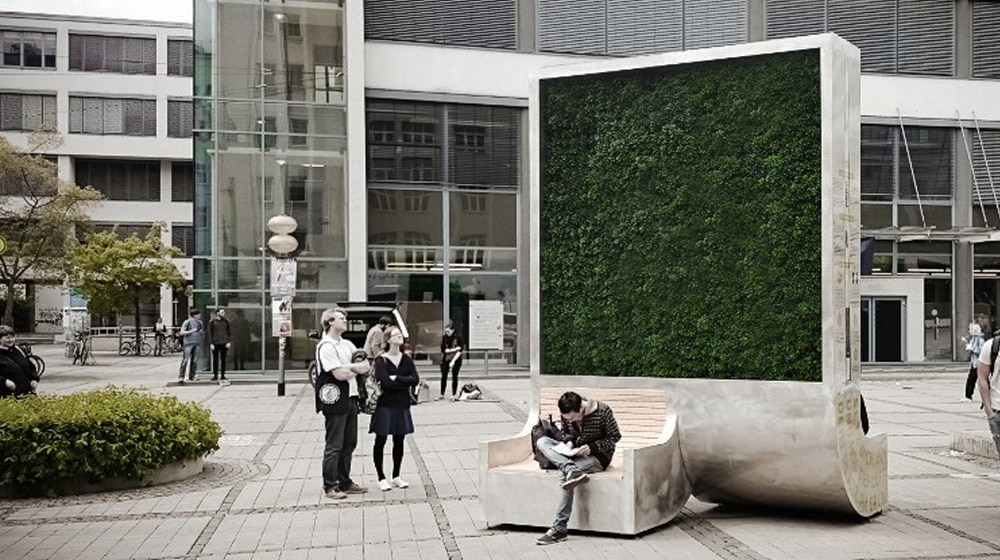 A German company has created a solution to the air pollution problem. Their mobile ‘CityTree’ installations, that can be deployed in the middle of the cities, can filter the air.

‘CityTree’ is a moss culture that can absorb air particles and CO2 polluting the environment. While it is not actually a tree (despite what its name implies), it has the same ecological impact as 275 normal urban trees.

Air Pollution is a Menace

According to the World Health Organization, seven million premature deaths are caused every year by air pollution. Polluted air is the largest ecological health risk which is impacting urban areas more specifically.

Up to 80% of the people living in areas that are monitored for their air quantity levels are exposed to pollution which surpasses WHO limits.

And it is estimated that two thirds of the global population will be living in urban areas by 2050 which shows the dire need for cleaner air.

A Berlin-based tech startup has created a ‘small forest-like’ tree which is a potential game changer for the urban environment. The isolated, vertical units are hooded in moss and lichens having enormous surface area for the absorption of particulate matter, nitrogen dioxide and ozone.

According to Green City Solutions,

The CityTree, being 4 meters tall, nearly 3 meters wide and 2.19 meters deep, has the capability of absorbing 250 grams of particles per day, removing 240 metric tons of carbon dioxide every year.

“Moss cultures have a much larger leaf surface area than any other plant. That means we can capture more pollutants,” Zhengliang Wu, co-founder of Green City Solutions, told CNN.

CityTrees are powered by solar panels and collect rainwater in troughs. They are also Wi-Fi enabled to measure the air quality.

Very little maintenance is required. Soil humidity, nutrient levels and general plant health have to be monitored via sensors and adjusted accordingly.

CityTree costs around $25,000, but it comes with a display that can be used for advertising on the trees via logos and screens on the unit. That in turn can make it good for advertisers to pay for it.

“Our ultimate goal is to incorporate technology from the CityTree into existing buildings,” Wu said. “We dream of creating a climate infrastructure so we can regulate what kind of air and also what kind of temperature we have in a city.”