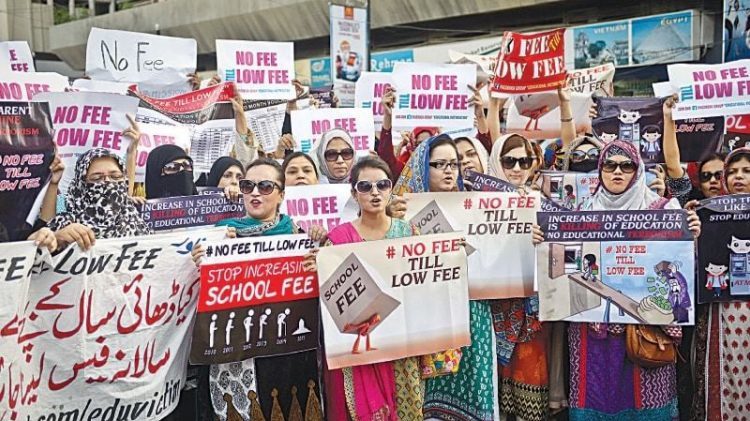 On August 18th, parents of children studying in private schools in Karachi gathered at Shahra-e-Faisal to protest against the rising fees of Foundation Public School among other private schools.

Their claim was simple; best explained by the protest hashtag, #ParentsAreNotATMs. They argue that the annual increase in school fee is unjustifiable and solely done to increase revenue and profits.

The protesters urged the provincial government to take action against the 5% increase in fee announced. They claimed that it is a violation of the law announced by the Sindh High Court last year.

The Court had rejected a petition submitted by the private schools for letting them increasing their fee by more than 5% per year. The education department was instructed to restrict the increase in fee and was asked to submit an audited accounts report on a quarterly basis.

However despite the law, a hike in the school fee left the students and parents outraged. They organised a protest and raised banners with slogans such as “no fee till low fee,” and “stop increasing school fee”.

Most people observing the issue can sympathize with these parents. However people belonging to the upper-middle or upper-middle class are also to be held accountable for this extortion-like situation.

The rise of tuition culture is also another mistake made by them. Parents increasingly send their children to take tuitions along with school. They seldom ponder on the meaning of good-quality education and do not keep track of their child’s learning.

Another factor contributing to the issue is the urge to be part of the ‘social elite’. There are only a few schools in the country that historically hold the status of being socially elite.  These schools have done so by carefully raising their fee to the amount only payable by a certain ‘class’ of people. Other schools seek to achieve this status by doing the same.

The blame cannot be set on just one cause or part of society. The situation is a result of multiple factors contributing equally towards the issue.

The protest, although justified, is unlikely to achieve much due to limited resources. A change will require a long-term process and effort to bring about a cultural-change in terms of education.