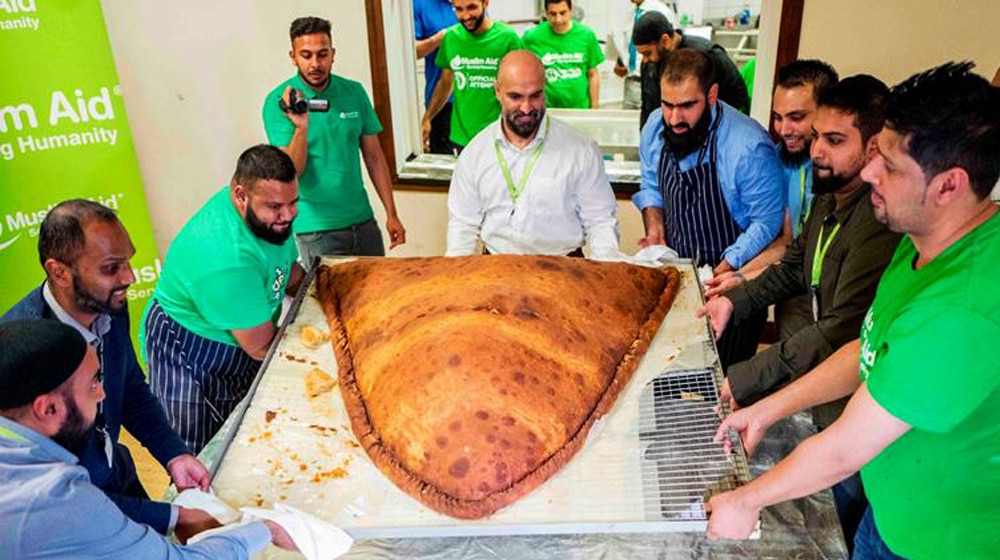 If you are a samosa lover then you will love this news.

This Tuesday the record for the largest samosa in the history of the world was smashed. This time around the samosa weighed a whopping 153.1 kgs! The previous record of 110.8 kg was set by Bradford College in northern England in June 2012.

It took a lot of hard work and a dozen volunteers to complete the challenge. The volunteers belonged to Muslim Aid UK charity. A huge vat was custom made to deep fry the samosa at a mosque in East London.

Observers from the Guinness World Records were present as preparations went on and overlooked the whole process so that they could certify that the mega-samosa met all the requirements to pass the test.

The samosa was prepared on a huge wire mesh and then put into the vat filled with cooking oil. Many men took part in the process, frying and readying it before it was taken out to be weighed.

The rules of the competition as announced by the adjucator from Guiness Pravin Patel were,

In short, the samosa was to look like the real deal, be edible and not a single portion was to be wasted.

Once it was fried and weighed it was tasted by the independent food safety officer who just gave a thumb up to the samosa and the whole hall went crazy with the happiness. Patel gave the final verdict and all the certificates to the achievers.

Initially the organizer thought that it would be an easy feat. But after he realized that there was no single vat which could bear the weight of the samosa he realized that hard work would be required and the task wasn’t as easy as he thought.

The whole process took 15 hours. Later the samosa was divided in hundreds of portions and distributed to homeless people as part of ongoing charity efforts by Muslim Aid UK .