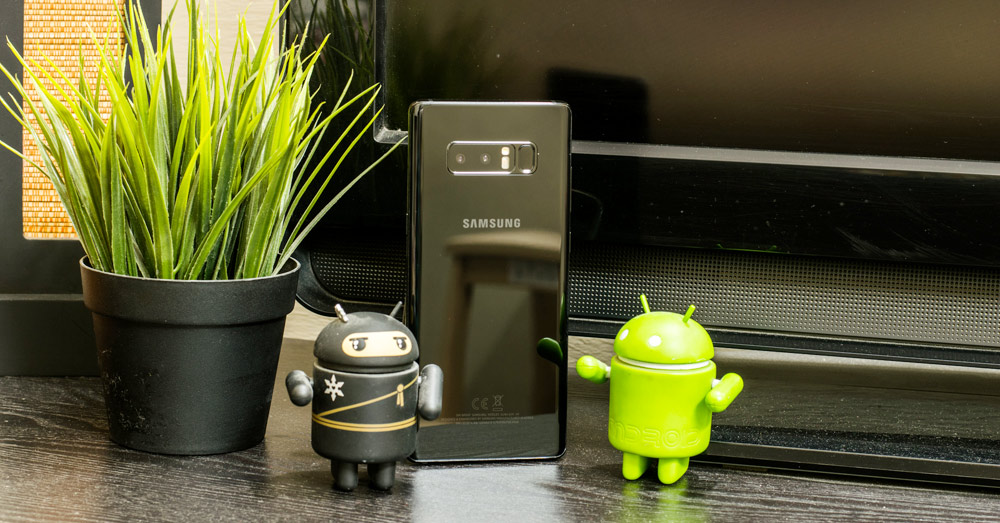 Last week we did the unboxing of the all new Samsung Galaxy Note 8. Since then I have been extensively using the Note 8 as my daily driver.

The Note 8 is the successor to the Note 5, it brings a lot of improvements and offers the best hardware available on any smartphone. So without any further ado, let’s take a look at it and see what it offers.

Let’s start with the design first since this is easily one of the best looking devices you can get in the market right now.

You have the infinity display at the front which means there is hardly any bezel around the display.

It is also protected by the Gorilla Glass 5 so it won’t get scratched too easily. There’s glass on the back too.

Both the display on the front and the glass on the back melts around the aluminum build of the phone. All of this does look premium and nice but this also makes the Note 8 very slippery.

Up top you get the Iris scanner, front facing camera and other various sensors. On the back of the phone is where you will find the new dual cameras, heart rate sensor, led flash and the fingerprint scanner.

The awkward positioning of the fingerprint scanner meant that I had to mostly use the Iris scanner, which actually works well once you set it up correctly.

On the bottom of the device you will find the 3.5mm headphone jack, USB Type-C port, loudspeaker and the S-Pen.

The display up front, as you may have noticed, is not small by any means. It’s a 6.3-inch panel sporting a resolution of 1440×2960 pixels. That is 521 pixel per inch. Text, images, everything on this display looks very sharp.

If there is anything that Samsung does anything best, it is their AMOLED panels and the Note 8 is no different. Featuring a Super AMOLED panel, the display shows rich black and very vibrant colors.

Not only is the display good in colors but it also gets very bright. The Note 8 manages to get around 1,200 nits which makes viewing in direct sunlight an easy task.

The 6.3-inch panel is not too wide so you can easily hold it in one hand. Instead they made it taller so reaching for the top to bring down the notification panel did get a bit more difficult.

Videos, however, suffer from the tall screen. While the phone itself uses a 18.5:9 aspect ratio, videos uploaded on YouTube have a 16:9 aspect ratio. So any video that you play will have black bars on the side. You can expand it but do expect some portion of the video to be cut off.

There are advantages to having such a tall display too. Split window multi tasking for example is a delight to do on the Note 8.

You can fit more emails on the screen without scrolling down and if you like reading long form articles or books on your phone, you’ll love the taller display.

Moving on to the performance of the phone, let’s get the numbers out of the way first. The Note 8 uses Samsung’s home baked Exynos 8895 octa-core processor along with 6GB of RAM. This is the first time Samsung is putting 6GB of RAM on a flaghship device.

The performance of the Note 8 is incredible, to say the least. Apps open almost instantly and there’s no lag whatsoever.

Heavy and resource intensive apps also work without a stutter. Gaming on the Note 8 was also a smooth experience as it handled titles like Asphalt 8 without breaking a sweat. There were no dropped frames or anything of the sort.

Multitasking was already being handled without any issues with just 4GB of RAM but the 6 gigs of RAM on the Note 8 takes it up a notch.

You can easily move between applications without having them to close or refresh every now and then. The extra 2 gigs of RAM also helps with split window multitasking. All in all, you can expect the Note 8 to deliver performance that will put many other flagships to shame.

Most flagships from various companies now feature dual camera setups so it was only a matter of time before Samsung would include it on one of their phones too.

Meet the Note 8, the first phone from Samsung to feature a dual camera setup. One is the standard wide angle lens whereas the other is a telephoto lens that features 2x optical zoom.

The camera interface is pretty simple. You have the shutter button, video mode at one side of the screen while the rest of the of the stuff is on the other side. You can swipe on the viewfinder for a list of modes that you can choose from.

The picture quality itself is as you would expect from a flagship smartphone. Photos are packed with lots of detail and sharpness. Colors are vibrant and not overly saturated.

The main highlight however is the portrait mode of the Note 8 which uses the secondary telephoto lens. As mentioned earlier, it also features optical image stabilization. You can press the 2x button to instantly zoom in on a subject.

Once you do that, you can also enter the live focus mode. With this you can change the background blur of an object and view it right from your viewfinder instead of seeing it after you have taken the shot. I found that if you keep the slider in the middle the blurriness is almost natural and isn’t overdone.

Another good thing is that once you have taken the photo it will save both the portrait shot and the normal wide angle shot so you don’t have to take both separately. Depending on the lighting conditions, live focus mode might not be available.

Results from Samsung’s implementation of the portrait mode were impressive and could easily fool someone into thinking that they were taken from a full sized camera and that is by no means an easy accomplishment.

You can check out the full-res camera samples below:

The front camera has also improved and now features an 8MP senor with autofocus. It does suffer a tiny bit in low light condition where noise starts to creep in but otherwise it’s a solid performer too.

On the software side of things, the Note 8 is running the latest Android 7.1.1 Nougat. Actually it is not the latest since Android Oreo is out but it has only been a few weeks so we can forgive Samsung for that.

On top of the vanilla Android is Samsung’s custom Grace UX which might be the best looking OEM skins out there. And perhaps the most functional too. It has a ton of features designed to make your use of the device easier and more comfortable. While I love stock Android on any given day, if i had to use any other skin, it would be the Samsung’s.

After the launch of the Note 8, many people complained that the Note 8 now looks like the S8 Plus with just a slightly bigger display. That is not the case. The Note series differs in many more way than just the display and the S pen. On that note, let’s move towards the feature that sets apart the Note and S series of Samsung, the S-Pen.

For the unaware, the S-pen is a stylus that has been a part of the Note series since the first one launched 5 years ago. On the Note 8, it comes with a bunch of improved features. Firstly, the tip of the pen is now thinner for better accuracy and is more sensitive to pressure. As far as the usage goes, you take out the S pen even when the screen is locked and write down a note which you can later either pin to the always on display or save.

Furthermore, with Air Command you can select a bunch of stuff that you can do with the S-Pen such as take notes, take screenshots and edit them. The newest one include something called the live message. It allows you to write a message or draw on pictures and it will save it as a GIF in your gallery which you can later share with your friends or family.

You can’t even lose your S-pen. If you tried to move away with your phone without putting the S-pen back in, the phone will sound an alarm to warn you.

The Note 7 last year had a large battery that caused well-known problems for it. This year Samsung decided to keep that in check and went with a reasonably sized battery. This year we have a 3,300mAh battery.

At first I was concerned that a battery of this size on a phone this large may not perform. However my testing proved that to be wrong. Battery life was not as bad as I expected it to be. On average it gave me around 5 and a half hour of screen on time with 17 hours of usage.

This was all with me running benchmarks, playing games, YouTube and checking social media. For a light user, the Note 8 will give even better battery life.

The Note 8 also supports fast charging. So even if your phone does die before the day ends you can just put it on the charger and it will charge right up. And since this is not a product from Apple, it does support wireless charging too. So if you don’t feel like reaching for the cable each, you can just place it on your wireless charger.

All in all, my experience with the Note 8 has been nothing short of amazing. Note 8 is fantastic and it is without doubt the best phone in the market that you can buy right now. But make no mistake, you pay for the privilege.

Coming in at a price of Rs. 110,000 it is the most expensive phone Samsung has ever released in Pakistan.

However, that won’t deter die-hard Samsung fans from buying this phone. And I can’t blame them. It is a beautiful piece of hardware, has the best all around performance figures you can get and the best camera in the industry.