Pakistan Telecommunication Authority (PTA) has decided to reduce the Mobile Termination Rates (MTR) from Rs. 0.90 per minute to Rs. 0.80 per minute that is likely to give benefit to the consumers and mobile phone operators in coming years.

For those who don’t know, MTR is the fee charged for off-net calls and is paid by the calling party’s operator.

So imagine, if you are calling from Jazz to Telenor, then Jazz will give this MTR fee to Telenor on per minute basis. And this is why off-net calls were expensive as compared to on-net calls.

With reduction in MTR, off-net calls are going to get cheaper with time, particularly, if they are reduced further during next few months — as indicated by PTA.

The reduction of MTR is expected to help operators to offer better off-net call rates and reduce the current differentials of on-net and off-net rates. Further, the reduction in MTR is also expected to reduce grey traffic as it will decrease incentive for illegal termination.

PTA set the last MTR in 2010 at Rs. 0.90 per minute. Now, a review of the existing MTR is required in Pakistan in view of the changing market structure of the cellular mobile segment. PTA has also received requests from telecom operators to review the existing mobile termination rate.

The final MTR will be determined by the authority once it will get feedback from all stakeholders including cellular phone operators.​

MTR in Pakistan Is High

MTR/ min in Pakistan is highest in local currency as compared with countries mentioned in the below table.

MTR/ min in US cents is the second highest in Pakistan after Australia. Meanwhile, Average Revenue Per User (ARPU) in Pakistan is second lowest to stand at USD 2.91 after Bangladesh. 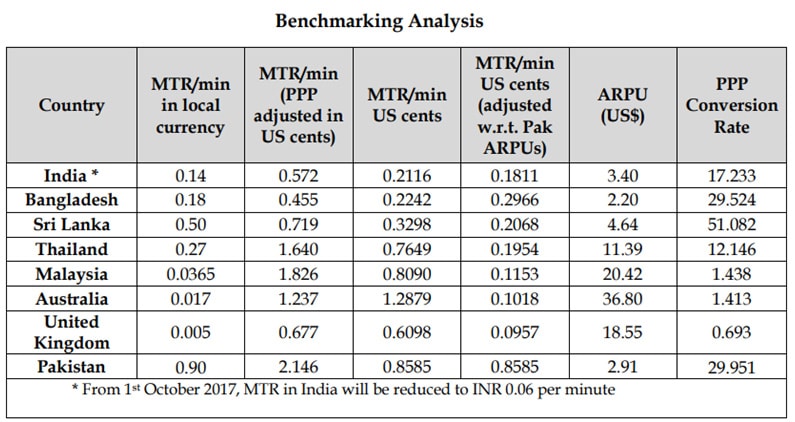 Average Revenue per User (ARPU) in cellular mobile markets of the mentioned countries are between USD 2.2 to USD 36.8.

For alternate benchmarking, ARPUs of sample countries have been used relative to Pakistan’s ARPU. Using this benchmarking method, mean benchmark MTR is Rs. 0.179 and median is Rs. 0.190.

PTA To Revise MTR Through Cost Based Study

According to the PTA, the revision in MTR is an interim measure however the regulator may revise the rates further after it will undertake cost based study as per Telecommunication Policy 2015 that states that the cost-based interconnection charges will be reviewed not less than once every two years.

There are number of countries that have adopted benchmarking methodology for determining termination rates such as Australia, New Zealand, Namibia and Bahrain.

Therefore, PTA proposes to determine an interim MTR based on international benchmarking and in the meanwhile, a cost based interconnection study would be carried out. Subsequently, MTR may be reviewed / determined in the light of results of cost based study.

Pakistan’s cellular mobile sector has undergone substantial changes since the last review of MTR in 2008. The introduction of 3G, 4G LTE i.e. ‘mobile broadband’ is undoubtedly the foremost landmark. Cellular teledensity has increased from 54.6% in June 2008 to 70.85% as of June 2017 and ARPU is around US$ 2.2 per SIM.

Cellular mobile subscribers now stand at 139.78 million as compared to 88 million in 2008. More importantly, telecom revenues have jumped from Rs. 279.6 billion in 2008 to Rs. 456.4 billion in 2016. There have also been significant regulatory and market developments.

Mobilink and Warid have merged into a single entity thereby reducing the number of cellular operators to four. Consumer tariff structures have also changed drastically. Over the years, the differential in the on-net and off-net call rates has increased and operators are offering an increasing number of on-net offers including free on-net calls. In addition to normal call rates, CMOs are levying services / admin charges and call set-up charges.

The authority has invited comments of the stakeholders including CMOs by 9th October 2017 of the this paper, which can be viewed here in detail.