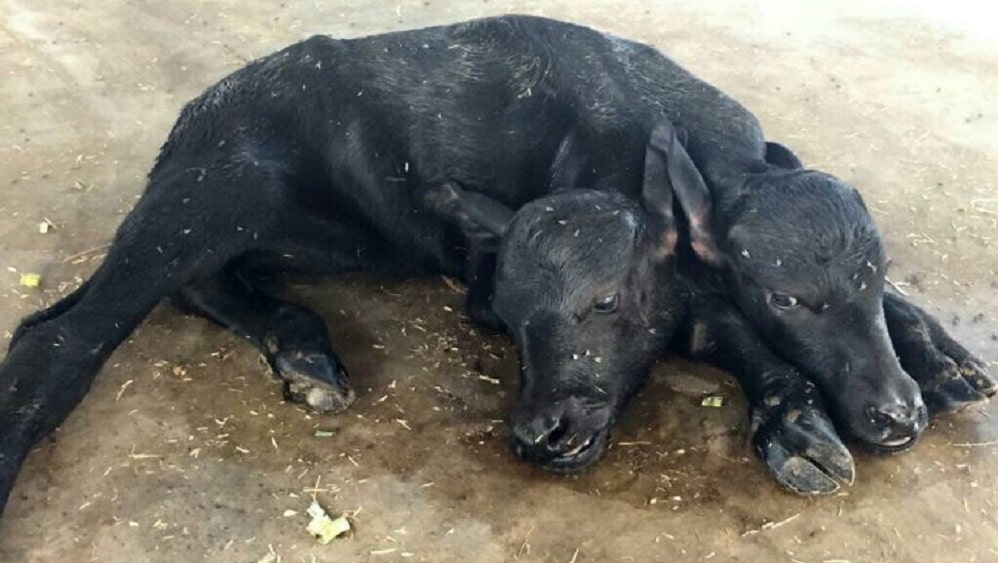 A two headed buffalo calf was recently born in a dairy farm in Pakistan. The local farmers have dubbed it a “miracle”.

The calf was born on the Lucky Foods dairy farm in Karachi on September 27th. Here’s what it looks like:

As seen in the picture the two headed buffalo has fully formed heads with 4 eyes and ears as well as two mouths. This is a rare genetic disorder called polycephaly in which animals are born with two heads.

Can’t Stand or Lift Its Head

The calf is unable to lift its head or stand on its legs as the heads are too heavy. It can’t suckle from it’s mother either and is currently being fed by a bottle.

A two-headed calf! I didn’t believe it when the farm manager gave me the news on the phone. I rushed to the farm to see the calf. It is a miracle. Upon touching the calf, I was surprised to see that his one head was cold and the other was a bit hot.

He added that they weren’t expecting the calf to survive for more than a day. Despite the odds the bizarre looking calf has survived for almost a week.

Animals suffering from polycephaly have two separate functioning brains. Each head controls separate organs and limbs however the specific connections vary from case to case.

The condition is caused due to the embryo beginning to split into twins then stopping mid way. This causes the twins to remain attached to each other even after birth.

“I would like to see him live, and see him get up and walk and function,” says Salman Hussain.

The animals with polycephaly rarely survive for more than a few months.