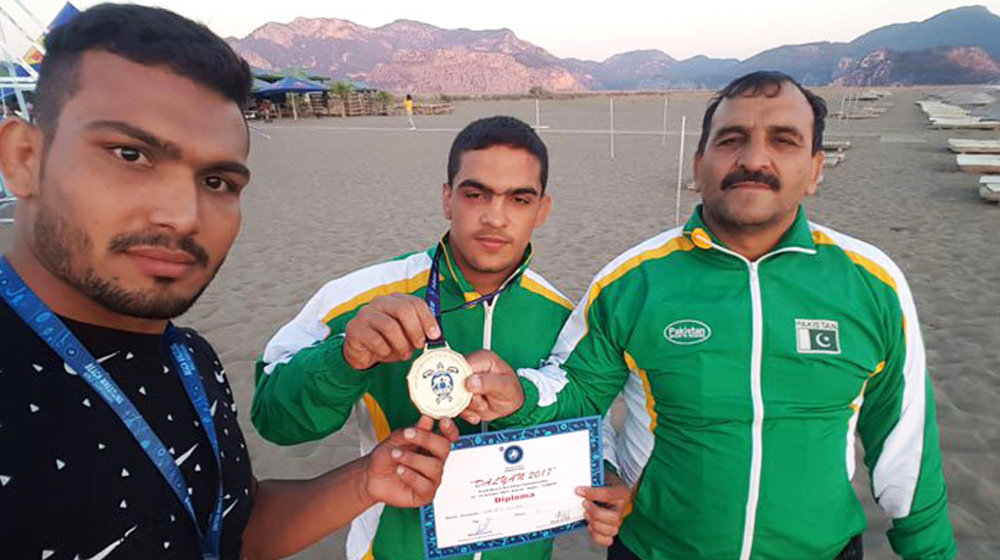 After winning a gold medal in World Beach Wrestling Championship held in Turkey, Inayat Ullah has been rewarded with Rs. 1 million and a 5 marla’s plot by the government of Khyber Pakhtunkhwa.

Inayat Ullah faced a strong rival in the final of World Beach Wrestling Championship. Pakistan faced Iran and Inayat won with a score of 3-0 in freestyle 70kg Cadet event. 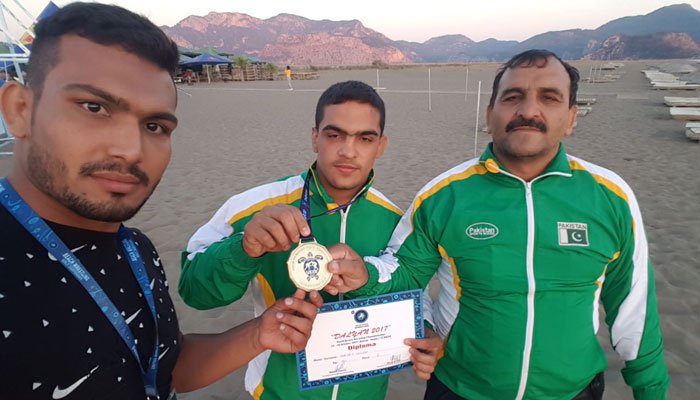 The reward was announced by KP Sports Minister Mehmood Khan in a reception hosted in the honor of Inayat Ullah at Qayyum Sports Complex. 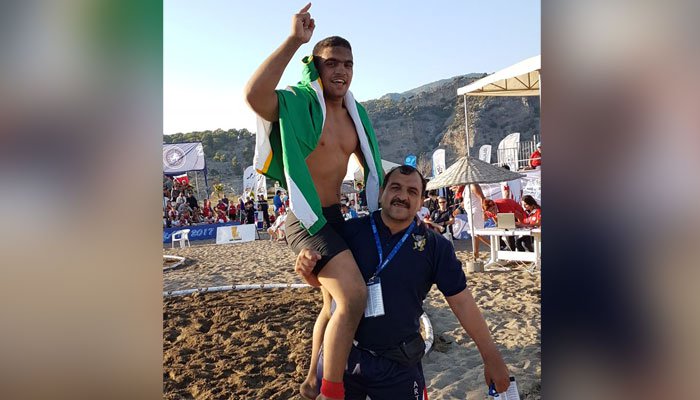 This isn’t the first time Inayat has made Pakistan proud; he also represented Pakistan in Asian Cadet Championship in Bangkok earlier this year and managed to win a silver medal.

In the tournament, Inayat defeated Ahmet Faruk Uguz of Turkey in the semi-final and before that he defeated Ibrahim Samil Ozak of the home country.

Pakistan had two representatives in the World Beach Championship; Inayat and Inam . Inam wasn’t left behind as he also won a gold medal for Pakistan in the 90kg senior category.

Inam faced mighty Pejman Fazlollah Tabar Naghrachi in the final whom he beat 2-1 and clinched the gold medal in the freestyle senior category in 90kg competition in Dalyan, Turkey.

Syed Aqil Shah, who is the chairman of the Pakistan Wrestling Federation (PWF), showed his appreciation for both goal medalists and said that they have made the nation proud.

PWF is grateful for the support extended by the Pakistan Olympic Association and Pakistan Sports Board for the national wrestlers.

He further extended the appreciation to the father of Inayat Ullah, who has tirelessly worked day and night to ensure that his son became capable enough of representing Pakistan and actually winning something on the main stage.

Mehmood Khan, who is KP’s Sports Minister, said that the government will make sure that efforts of national heroes such as them don’t go to waste.

We have also given Rs 1 million each to Aamir Atlas Khan and Mansoor Zaman for winning Gold Medal in Asian Games and certainly such incentives for all those who excelled at international level.