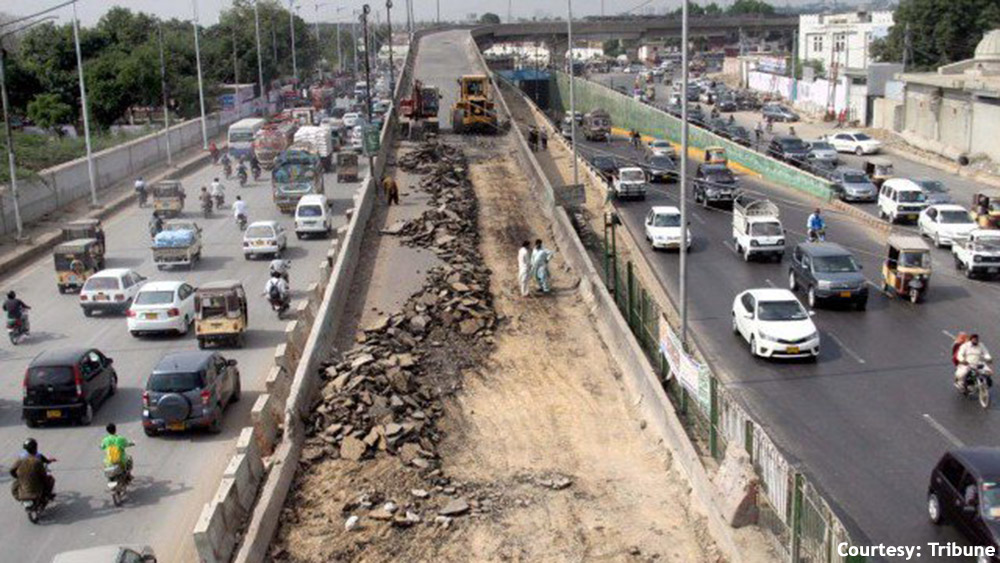 On Monday, Karachi’s most important thoroughfare, Shahrah-e-Faisal, observed a huge traffic jam and created chaos among the commuters when the Drigh Road flyover was blocked for the routine traffic.

The flyover, that connects the Drigh Road to Gulistan-e-Johar, was closed at around 4pm on Sunday for maintenance which created long queues of vehicles on main highway of the city. The traffic coming from both sides was forced to commute through a single road, causing immense traffic jams.

Sources from the Karachi Metropolitan Corporation (KMC) told the media that the Drigh Road flyover has reportedly become an easy source of ‘pocketing extra cash’ for the officials of the technical services wing.

The sources claimed that the flyover is shut down every other month in the name of ‘maintenance work’ and millions of rupees are extorted from government’s treasury in return.

According to sources, the corruption done by some entities results in the periodic shut-down of the Drigh Road flyover, causing agonizing traffic jams and an unpredictable loss to the exchequer.

“The flyover’s condition was worsening day by day and the construction work would take up to three months,” Maintenance Project Director Niaz Soomro told.

“The flyover extends over half-a-kilometre, which is why the construction will take so long”, he added.

Soomro said that the government of Sindh has released funds for the project and it will cost more than twenty million rupees to repair the flyover, and they will try to complete the project in ‘minimal time’.