The efforts of marketing and sales departments of branchless banking companies reaped massive benefits as they witnessed a handsome season. The account holders’ base witnessed a record growth of 3.6 percent in the second quarter of 2017, showing a double digit growth of 15.3 percent compared to the previous quarter.

According to State Bank of Pakistan (SBP), the number of total branchless banking (BB) accounts grew to 27.3 million by the end of June 2017 from 23.6 million accounts reported till March 2017.

The rise in BB accounts are exhibiting a steeper trend owing to the permission to open accounts through biometric verification devices present at agent locations, as well as through remote mode (which enables the customers to open their accounts from their biometrically verified SIM) under the revised Branchless Banking Regulations issued in 2016.

Furthermore, the cost reduction in customer verification process from NADRA has also provided encouragement to the BB providers to open accounts of their customers. It reduced the verification charges to Rs. 10 per new account holder.

However, among the overall accounts, the activity transactions remained stagnant at 48%, same as in previous quarter. This means that out of every 100 BB accounts, only 48% have performed a transaction in the past 180 days.

This behavior of accounts reiterates the fact that the BB channel is confined to limited product offerings and the banks need to diversify their product mix for more people.

The competition in the industry shows positive results, both for the consumers and BB providers, especially the competition between Easypaisa and JazzCash.

JazzCash for the first time has surpassed Easypaisa both in total as well as active BB accounts. UBL Omni remained the third biggest player, however, the other players did not pour in much effort to enhance their presence in the business and the aggregate figures of other 9 players remained the same as previous quarter i.e. 2%.

The competition in the branchless banking sector is limited to just three players—JazzCash, Easypaisa and UBL Omni. This does not bode well for the future as small players will not be able to grow their business, on the other hand, the customers will have limited options and services.

SBP should look into the market composition and promote competition among the players that will ultimately improve quality of services for the customers against affordable charges.

Interestingly, BB accounts witnessed 17% and 10% growth in male and female accounts respectively during the quarter ending in June 2017.

The BB deposits witnessed a sizeable rise of 95% over the preceding quarter by rising from Rs. 7.9 billion to Rs. 15.4 billion. Similarly, the average deposit per account increased from Rs. 334 to Rs. 565, exhibiting a 69% growth. 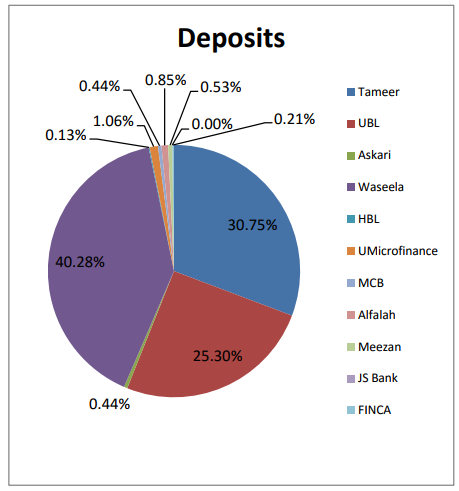 The BB transactions increased 19% and 32% in volume and value respectively over the preceding quarter.

The customer oriented transactions, which comprise of total BB transactions excluding agent related transactions, witnessed a 19% increase in number and 35% in value from the preceding quarter to reach 161.8 million and Rs. 473.9 billion respectively.

A total of 5.4 million transactions worth Rs. 272 billion were conducted by agents for liquidity management purposes. The agents related transactions constitute 3.2% and 36.5% in total BB transactions in terms of volume and value respectively.