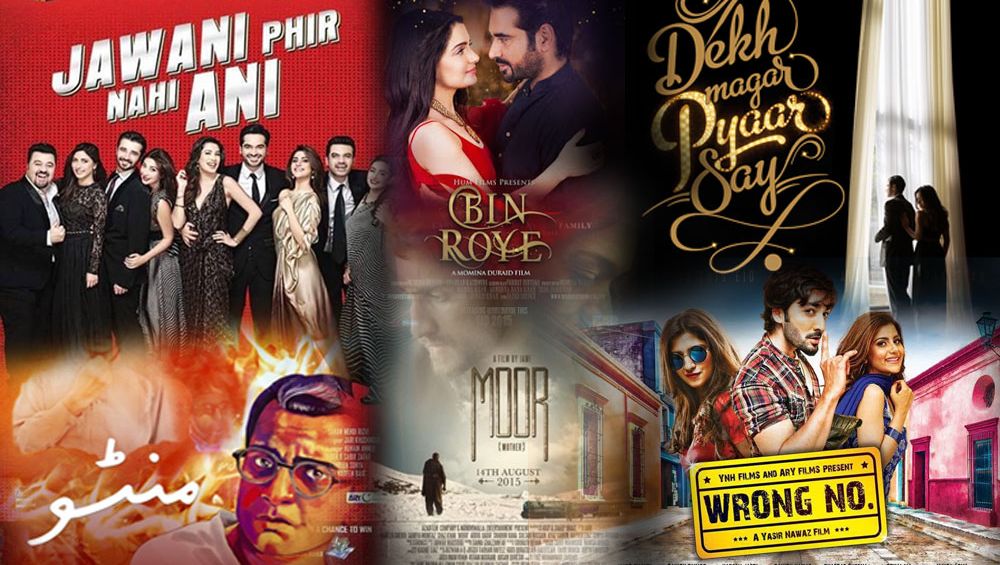 If Pakistani filmmakers continue making movies that look like a low-budget version of Indian movies, the film industry is doomed. Why doesn’t it draw from Bollywood’s much more popular competitor – Hollywood?

What we don’t realize is that Hollywood is not just an industry but a film making standard worldwide. Many foreign film industries like the Korean, French, Chinese, Iranian and Turkish ones remain true to their local aesthetics while following the stylistic and storytelling standards of Hollywood.

Film analysts say that the great paradox of film making today is that in order for a cinema to be nationally popular, it must also be international in scope.

This is proven by the fact that Pakistani film ‘Saya e Khuda e Zuljalal’ produced on nationalistic ethos alone failed to gain any traction while an internationally relevant movie like ‘Dobara Phir Se’ became one of the most popular movies ever made in Pakistan.

India produces a lot of nationalistic movies every year with ‘Chak De India’ and ‘Namaste London’ hailed as one of its most patriotic movies ever, but it does so cleverly.

It doesn’t try to force nationalism down the throats of its population, it gives reasons in the movie to feel patriotic. And of course it combines that with some really good storyline, direction and acting – something which the Pakistani cinema always falls short of.

The Indian film industry relies on Bollywood and its Tamil film industry to rake in the dough. The Tamil Industry thrives on what they call a ‘formula picture’.

In these films, the hero is invincible and you can’t kill the hero. If the hero is killed, the movie is likely a flop. The hero and the heroine are supposed to meet up in the end after the hero kills the villain. This is the unbreakable rule for Tamil films which caters to the Indian middle-class*.

If you want to do a study on sexism in films, study the Tamil film industry. They are typical representations of male macho-ism trying to rescue the damsel in distress, just like a Disney fairytale.

These Tamil films are also supposed to have a given number of (usually 5-6) songs to add the necessary flavor to what they call ‘Masala films’. But what happens when Pakistan tries to copy such films with the likes of ‘Karachi Se Lahore’ & ‘Lahore Se Aagey’? They do business but fail to make any real impact on the country’s filmmaking landscape.

While the latter was able to gross a revenue of $2.16 million and the former made $1.03 million, it’s negligible considering that this is the minimum budget used to make the most frugal Hollywood films. ‘Jawani Phir Nahi Aani’ ranks as Pakistan’s highest-grossing film ever earning $4.9 million at the Box Office. But is that enough? Why are we setting our standards so low?

Pakistan also needs to have fresh talent for its movie industry. Bringing in the same faces from its drama industry, that the audience is already exhausted of, will do nothing to resuscitate a film industry that is already on a ventilator. Pakistani films need to bring in fresh faces that will only be reserved for films and nothing else.

Bollywood and Hollywood both do that. Actors from Hollywood dramas hardly make an appearance in Hollywood movies and actors from Indian soap operas almost never show up in Indian movies. Benedict Cumberbatch is perhaps one of the few celebrities who have made their name in both the TV & Cinema industry, but such people are an exception rather than the rule.

Does Pakistan seriously lack good actors that it has to borrow the same old actors from its drama industry already past their prime?

So what did the South Korean public do? They got bored and stopped going to the cinema altogether. Are there any similarities here with the Pakistani cinema?

Doesn’t our own cinema obsess over showing Indians as the bad guys, with us emerging victorious over them? And does the Pakistani public like it? To some extent. No one feels patriotic through these films anyway.

Moving forward, Pakistani filmmakers need to create their own niche and make movies on local heroes and people. They should use Hollywood’s stylistic guidelines particularly when it comes to color grading. Because it is color grading that determines whether your product will seem like a movie or a soap opera.

We need to move away from making films on weddings and typical household disputes – these issues have already been addressed in Pakistani dramas. Why has no one made a movie on Edhi, Malala and Junaid Jamshed yet?

Analysts say that people just want entertainment so these types of movies won’t sell. If Hollywood thought like this, it wouldn’t have become the world’s biggest film industry.

After all, some of the highest-grossing Hollywood movies are the most serious ones – Dunkirk and The Dark Knight being one of them. I’m sure the Americans like being entertained too, so why are these movies so successful?