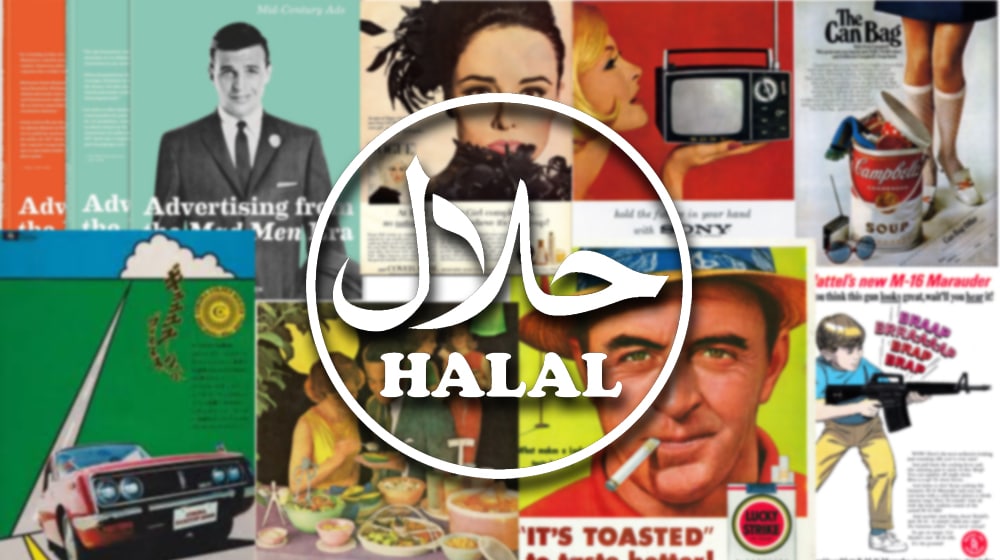 Cultural impressions largely determine the type and quality of advertisements that can run in a country. A joke that’s funny in Pakistan may not make sense to a Bavarian. In fact, we couldn’t care less about comical depictions of a Swedish goat, which the Bavarians would find hilarious.

Advertisers in the media know this fully well, and implement it into their marketing.

Here are a few ads in the Muslim world, that speak to the cultural and societal norms of the place where they first debuted. For students and observers in the marketing field, these are some pretty good examples to look at.

Beauty pageants have often served as unseemly considerations of facial and bodily attractiveness. You’d think that, in prohibitive atmospheres where women are fully covered, these competitions would not take place. Perhaps its time to revisit that observation.

The beauty company Olay found a way to make women in Saudi Arabia compete among themselves over the only feature the rest of the world is allowed to see — their eyes. 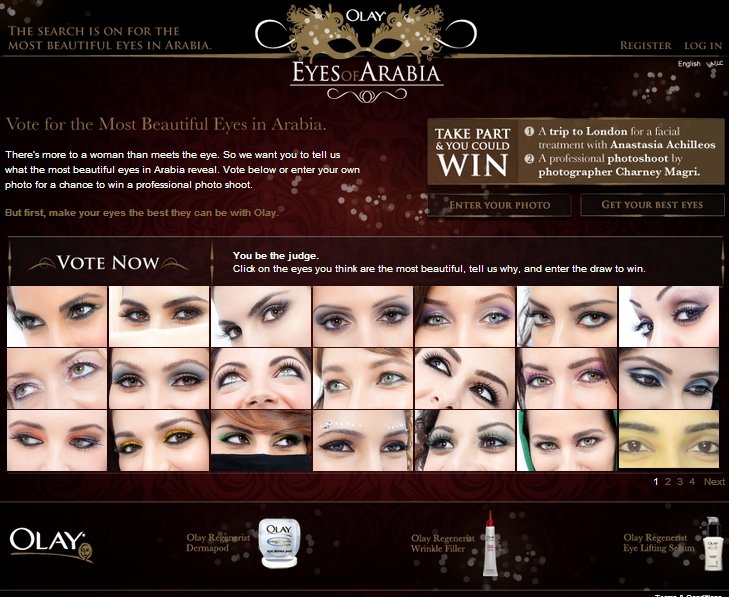 But the fact is, eyes are always beautiful. How did they ever decide on a winner? We can only think.

No, Saudis do not eat raw goldfish, as could be our very first reading of this ad.

The psychology behind this ad is that desert regions are scarce in water. Those who live in such regions however, would be attracted to such a photo. 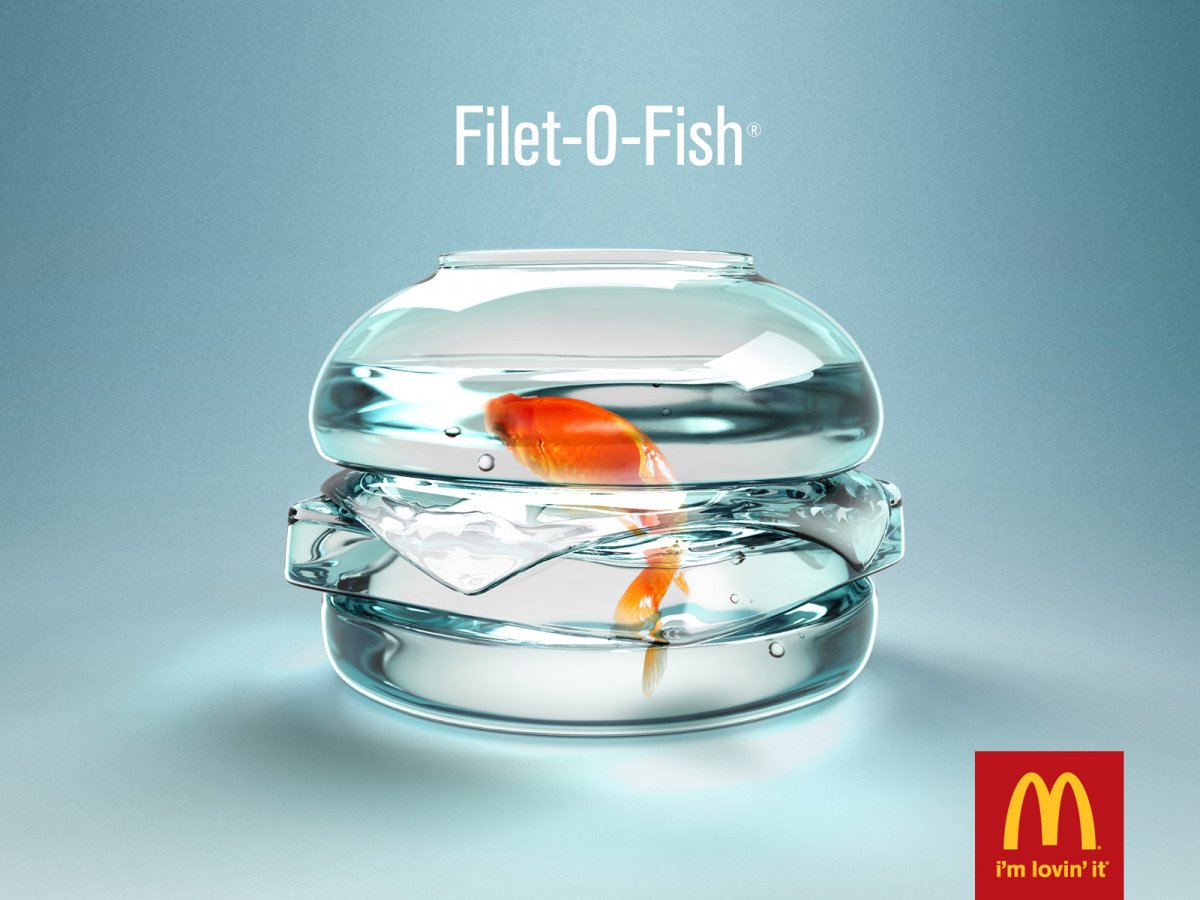 It might not be out of place to say that this ad might make people from other regions feel squeamish.

The Warmth of a Sandwich (Saudi Arabia)

Ah, another desert joke. As hot as Saudi Arabia is during the day, it is cold at night.

That is about the time when a hot spicy chicken sandwich begins to sound tempting (doesn’t it already?). 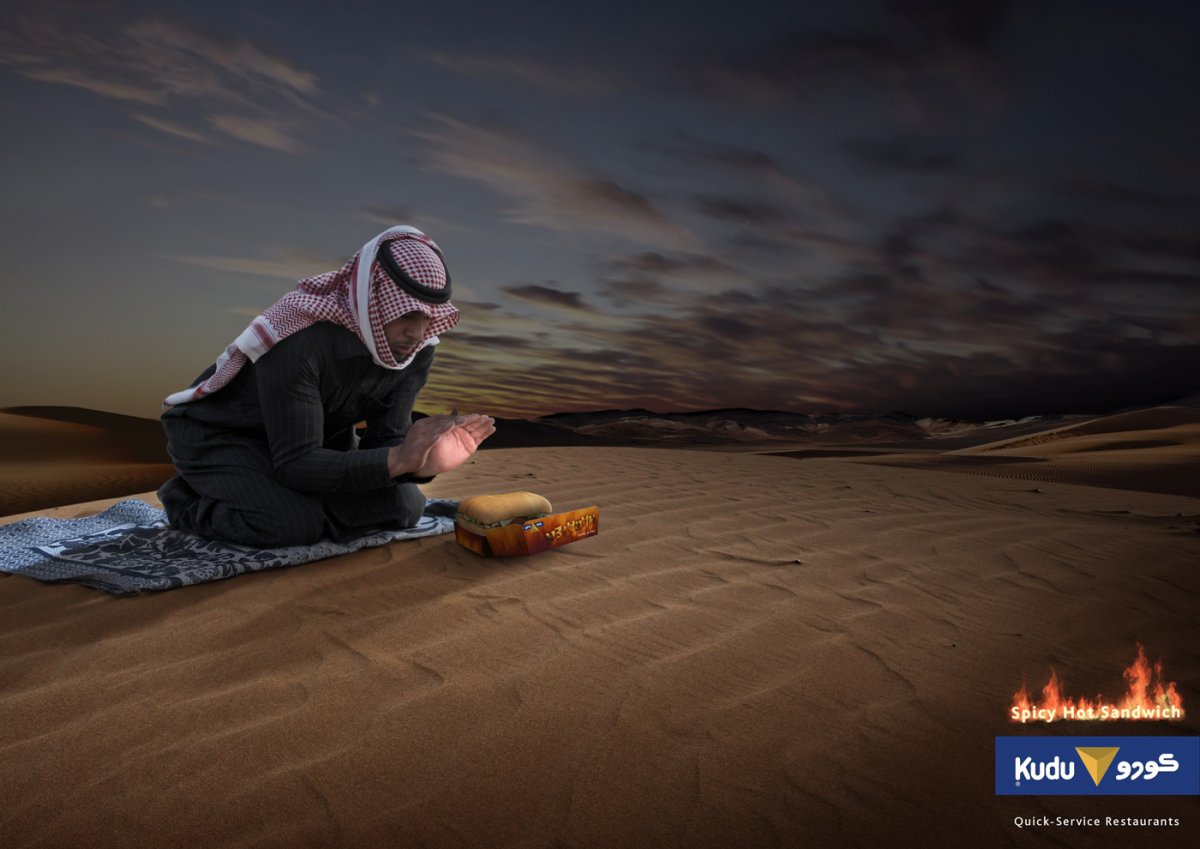 I guess this ad decided to portray just that.

What better way to convince people to purchase a floor cleaner than to display it in 3D on a bus, complete with choking germs?

This out of home marketing campaign in Iran did just that. 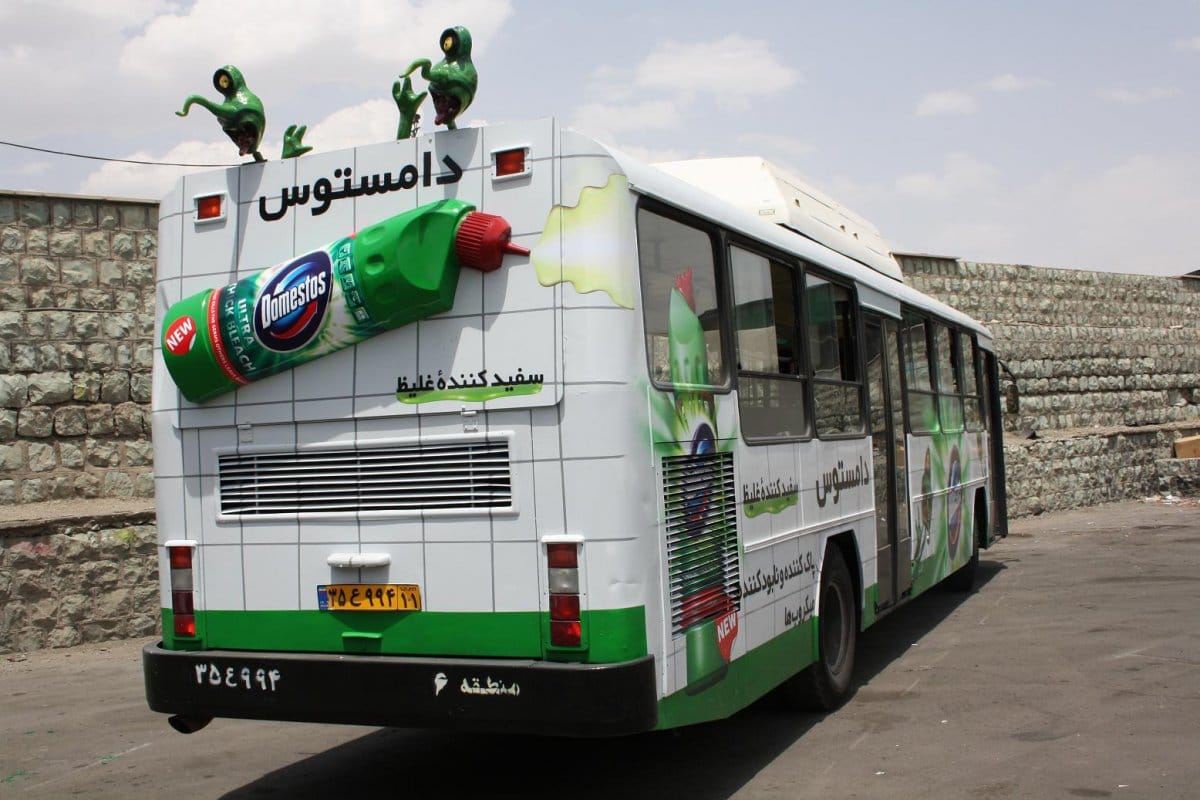 Looks cool, we’ll give it that, for germs that is.

Desi aunties are not the only ones who will scold you for watching too much TV (so that they can have it to themselves for never-ending local soaps).

It seems ad agency Leo Burnett in Saudi Arabia had the same idea. They released an entire series of advertisements against the dangers of television. 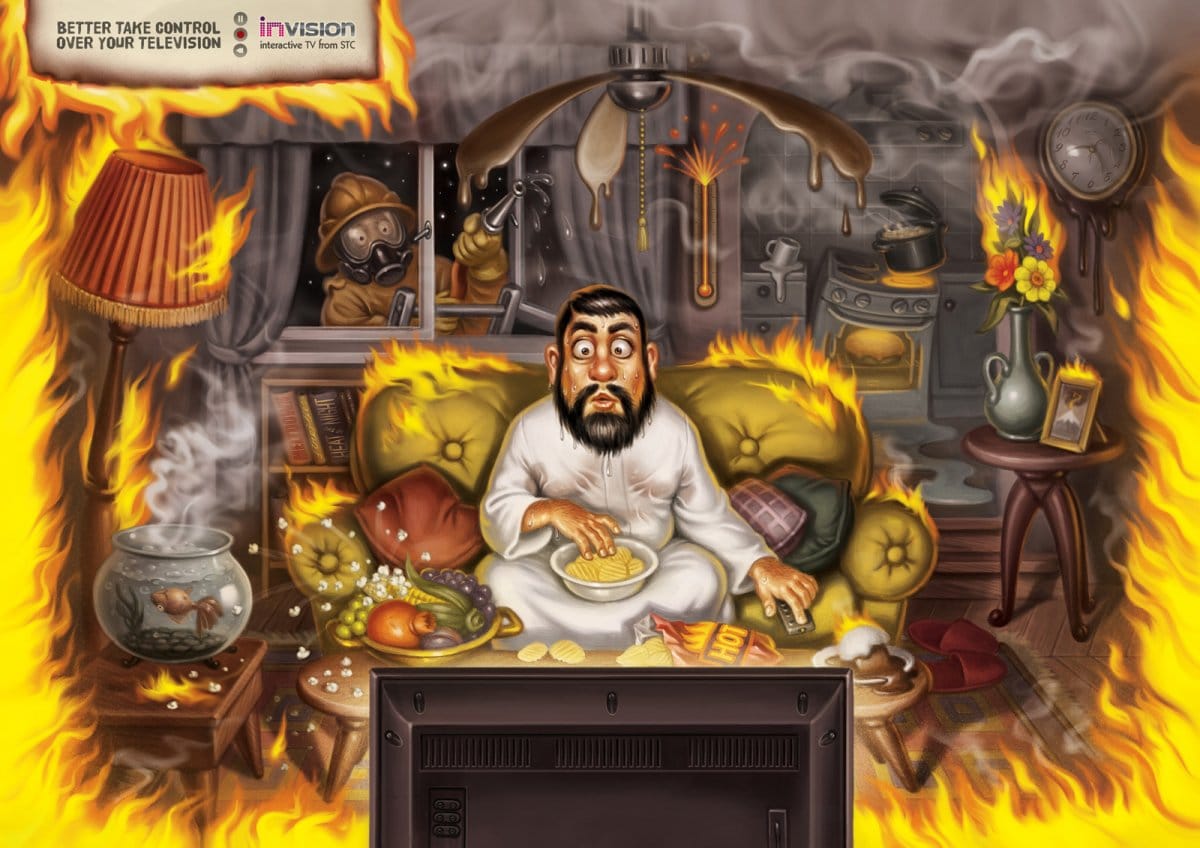 Guess they don’t call it the idiot box for nothing.

Kushbu is a brand that sells Hijaab and other Islamic garments online. It campaigned to empower women to celebrate their beauty while retaining the full picture of Eastern modesty. 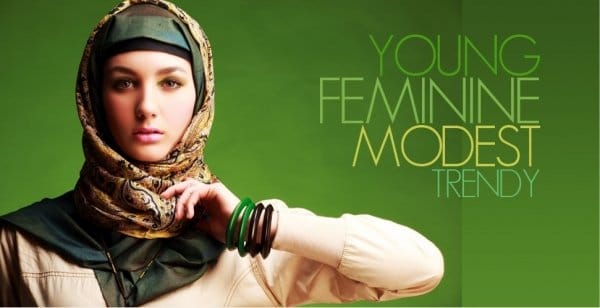 A simple ad almost always does the trick, like this one.

We have often seen rural women with a heavy pot over their heads, walk effortlessly as they go about their day.

According to an ad by TBWA Cairo, the answer to this complex balancing act may be the Pattex super glue. 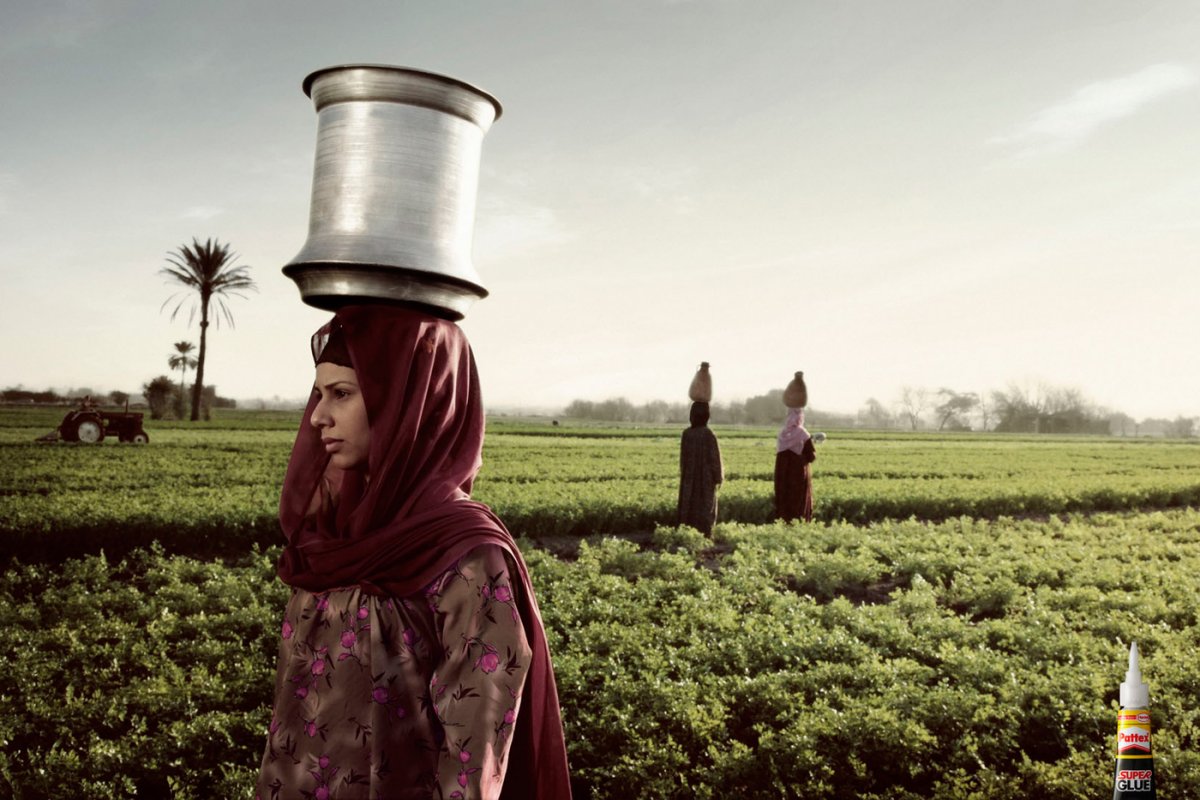 When in doubt, go with Pattex super glue.

In the Middle East, advertisements related to food items are censored during the month of Ramzan. McDonald’s decided to bend the rules the little with their ad:

To get around the censors, the burger in their ad is either covered in paper or not displayed at all, lest people lose self control.

An Advertisement of Patience

We all wait for the azaan that says we can break our fast in Ramzan, but this guy seems to be impatient.

This delightful Nandos ad plays around this concept:

We all know people in Qatar are wealthy enough to buy Persian rugs, and everything else they want. But how do they stop them from smelling like goats? Grey’s Champion Spray On Fresh of course! 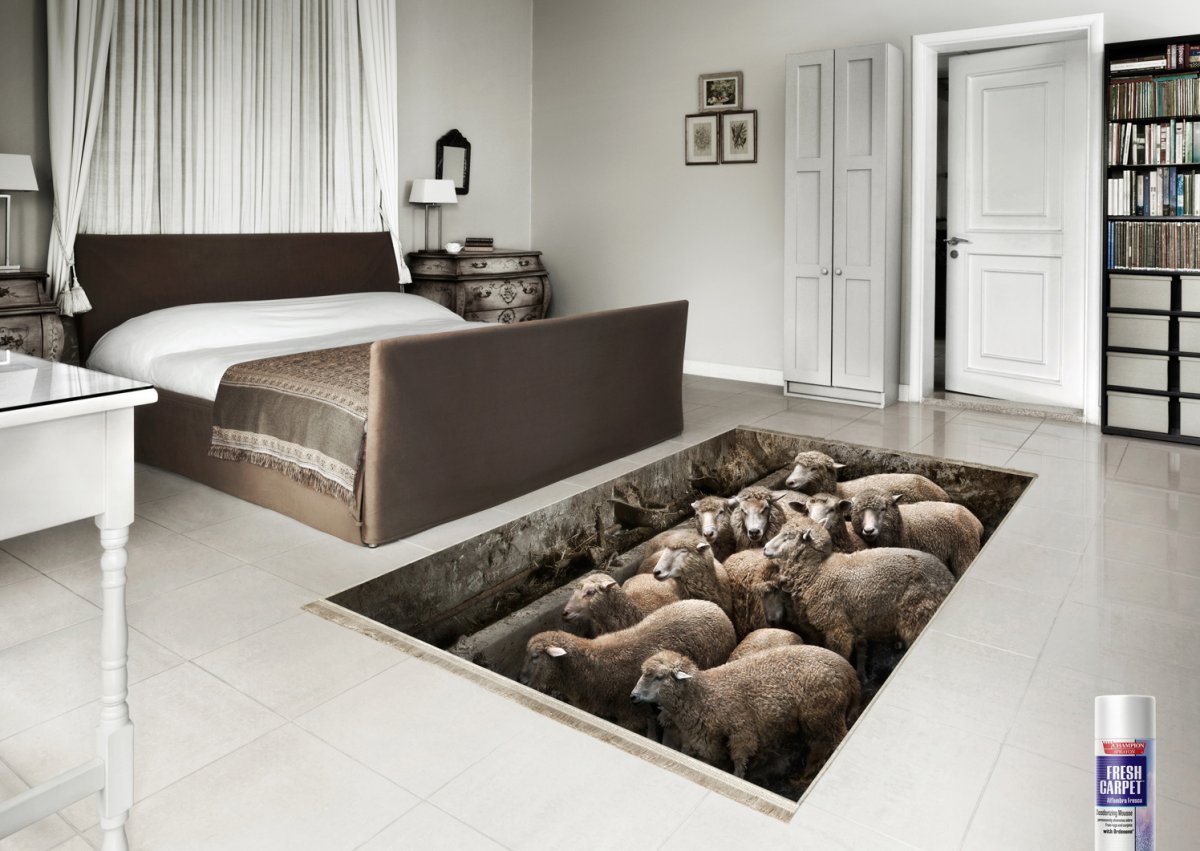 I think we need this here in Pakistan as well.

What better way to feature Pakistan’s cultural strengths than with our truck art? A vivid symbol of our rich and vibrant culture, this truck art was featured in a Coke ad in Soho Square. 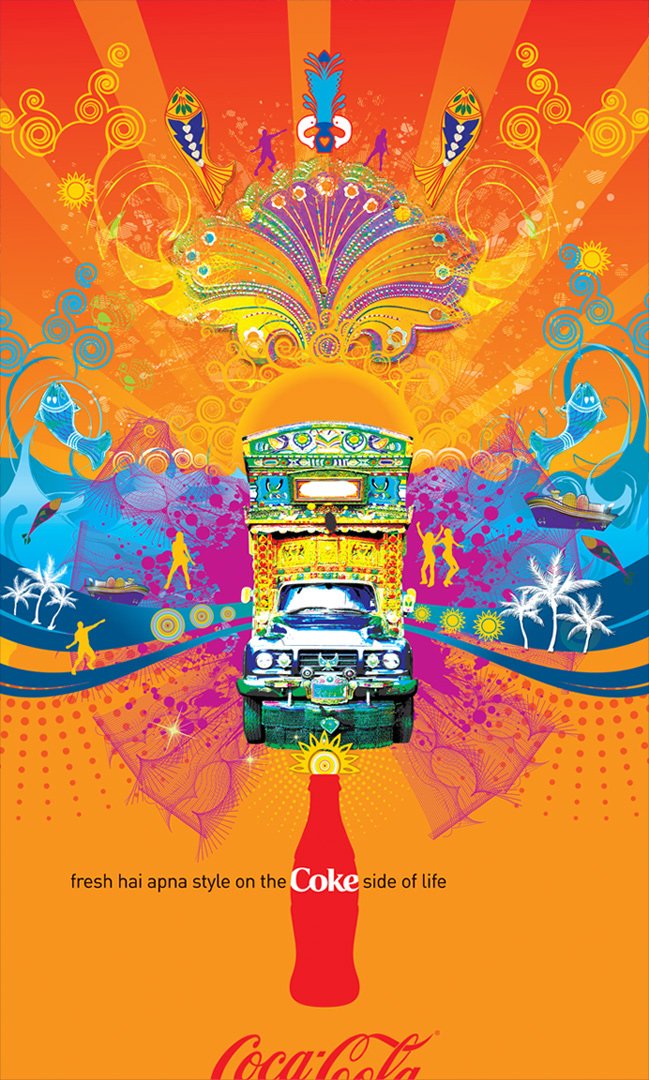 We suppose it’s nice to learn about what ticks and what doesn’t when it comes to advertisements from other Muslim countries. We’re happy with the Pakistani one, and can share a laugh (or even marvel) at the others.