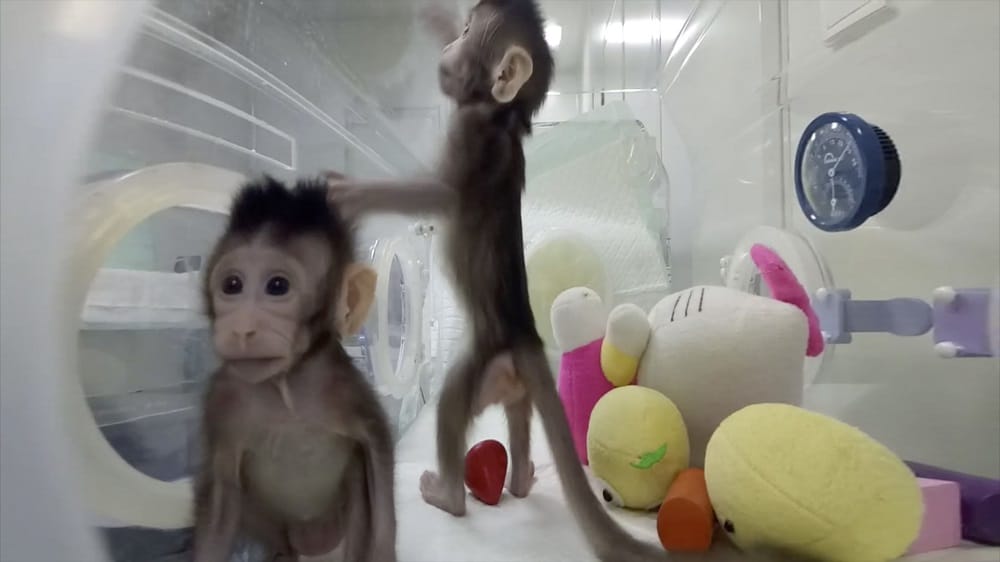 The world’s first primates from non-embryonic stem cells are two adorable long-tailed macaques. Hua Hua and Zhong Zhong were cloned by researchers in Shanghai. They were named after the Chinese adjective “Zhonghua” which means “Chinese”.

The two monkeys were born eight and six weeks ago, and were first introduced to the general public in a journal published in Cell on Wednesday.

A rhesus monkey called Tetra was cloned in 1999 using split embryo procedures, which are the same as natural formation of identical twins.

The technique used for creating Hua Hua and Zhong Zhong, however, is more refined. It is a modern and upgraded version of the method used to create Dolly the sheep in 1996.

The process is known as somatic cell transfer or SCNT. Scientists use this to extract the nucleus of one egg and replace it with the nucleus of another. Most of the genetic information exists in the DNA, and that exists in the nucleus. Therefore, scientists are able to provide identical DNA to two or more different eggs.

Although SCNT has successfully been performed on 20 different species (frogs, mice, rabbits, cows and dogs), it was not easy to apply this technique on to primates.

Shanghai’s team of researchers employed three years into the delicate process. They used 79 well developed embryos and implanted them in 21 female monkeys. This resulted in only 6 pregnancies, of which only two survived.

Hua Hua and Zhong Zhong are growing normally, but they are being bottle fed and treated with utmost care. A video below shows the twins in their luxurious frolics:

Jennifer Barfield of the Colorado State University is involved in studies on cloning procedures, and has commented that the progress is interesting, “particularly for primates, where success hasn’t been easy to come by.”

These two baby monkeys are indeed a breakthrough for scientific research. Muming Poo, author of the paper on this research understands this:

“Humans are primates. So (for) the cloning of primate species, including humans, the technical barrier is now broken.”

Researchers at the Chinese Academy of Sciences Institute of Neuroscience in Shanghai are particularly interested in the contribution that Hua Hua and Zhong Zhong could make to science. Genetic variants hamper the study of certain diseases. Identical clones would help detailed study in the case of Parkinson’s, Alzheimer’s and similar degenerative brain diseases.

But ethical questions have been put forth against advanced scientific pursuit. People for the Ethical Treatment of Animals (PETA) denounced the creation of Hua Hua and Zhong Zhong.

Senior Vice President Kathy Guillermo called it “a horror show” and “a waste of lives, time and money”.

“Because cloning has a failure rate of at least 90 percent, these two monkeys represent misery and death on an enormous scale.”

Other ethicists are concerned that the techniques could eventually apply to human beings, but Muming Poo and his team contend that the experiment is for medical purposes only.

“The reason we broke this barrier is to produce animal models that are useful for medicine, for human health. There is no intention to apply these methods to humans.”