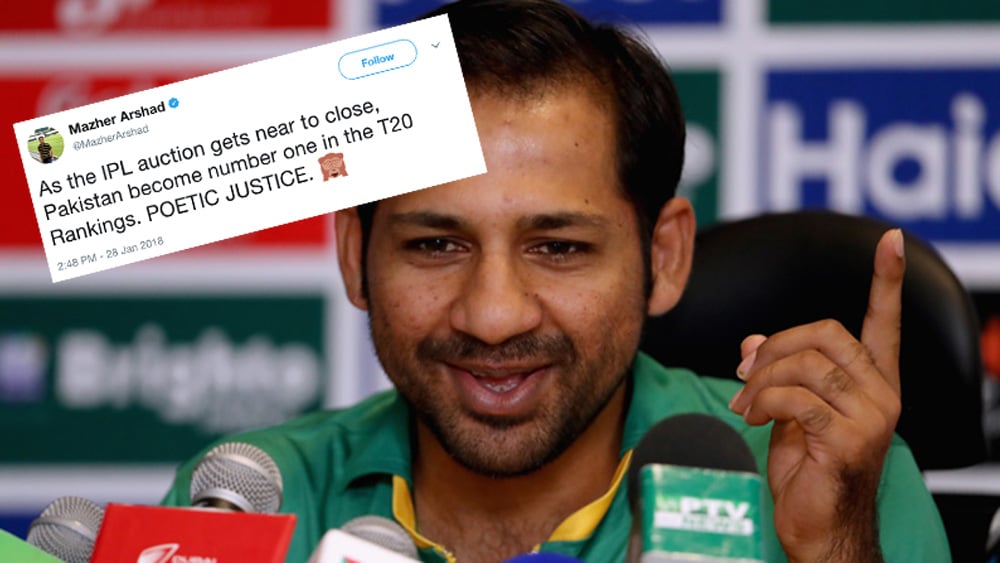 Pakistan cricket team made a brilliant comeback, having lost 6 matches on the trot in the series, to win the T20 series against New Zealand and rise to the top of the rankings.

The first half of the tour proved to be a nightmare for Pakistani players and fans alike, however, the team suddenly sprung back into their Champions Trophy mood and never looked back, easily winning the last two T20s to end the tour on a high.

Social media, which criticized Sarfraz and his men for poor performance in the One Day International (ODI) series, is now praising the grit shown by the team to overcome New Zealand in their stronghold.

We don’t need you, but you definitely need us!

As the IPL auction gets near to close, Pakistan become number one in the T20 Rankings. POETIC JUSTICE. 🙈

This is just the start.

#PakvsNz So the Pak tour to NZ did bring some good news, after all, Congratulations to Green Shirts for reclaiming Top T20I Team Spot, Well Played. Gotta Step up in ODI's too to be able to face the best in the upcoming Worldcup.

Not many teams are capable of pulling off such a fightback

Have you ever seen a team this unpredictable?😂 Well Played Fakhar Zaman & Ahmed Shehzad for giving an excellent start and kudos to Babar Azam n Sarfaraz for continuing the rhythm. One minute down,next minute up..That's the best someone has said about this team!#NZvPAK #PAKvsNZ

We won’t let anyone forget what we did to India in Champions Trophy.

Something we all have been eagerly waiting for!

Definition of a perfect Sunday.

#PAKvsNZ
When someone ask a question from me. What is the diff b/w PSL and IPL ???? then i simply show them these pics 😋😋😋
and they got my answer. pic.twitter.com/bJkiQPUL2r

Share your thoughts on Pakistan becoming the number 1 team in the world in the comments section below.