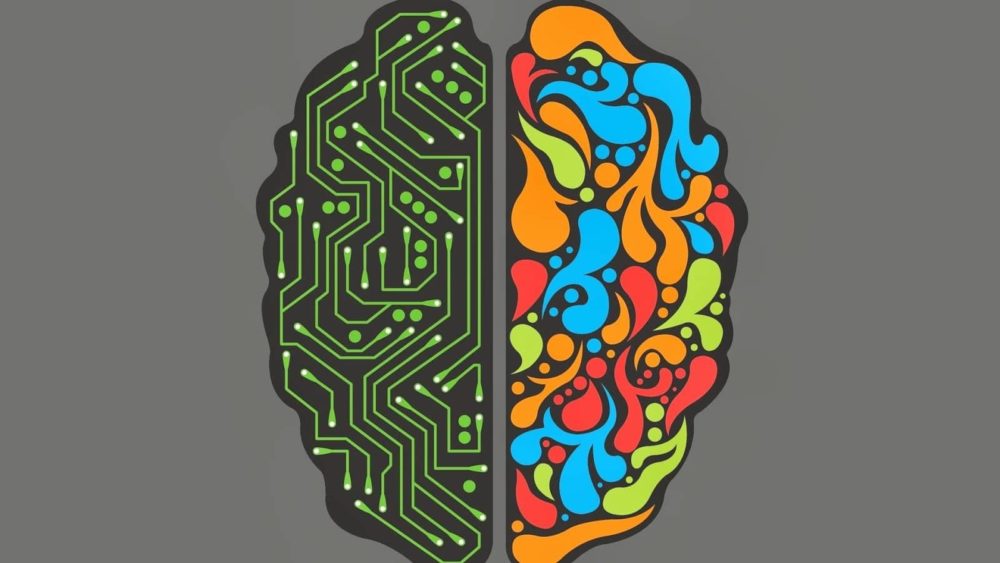 Code is everywhere. Our smartphones, our computers, our cars, TVs, fridge, everything runs on code. Every second you spend reading this article, your device is executing millions of lines of instructions which tell the device what to do.

HackerRank, an online community of developers from every field around the globe, uses competitive programming challenges for both consumers and businesses. With over 2 million developers onboard, HackerRank has a lot of data on programming trends as well as developers themselves.

For the first time ever, they conducted a massive survey of developers, their programming skills, learning habits, ambitions, and more.

They received 39,441 responses, providing some great insights on programming trends in 2018.

How Do Programmers Learn to Code? 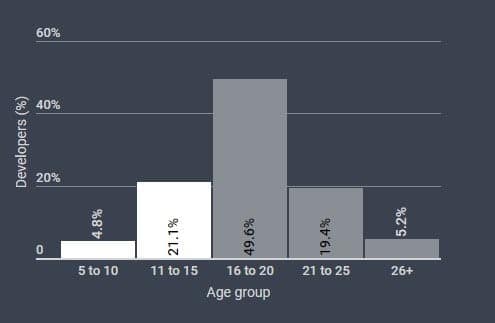 Admittedly, having started coding at a young age doesn’t mean that you will end up as the founder of some company, but there is indeed a correlation.

Nearly all developers have an insatiable thirst for learning. 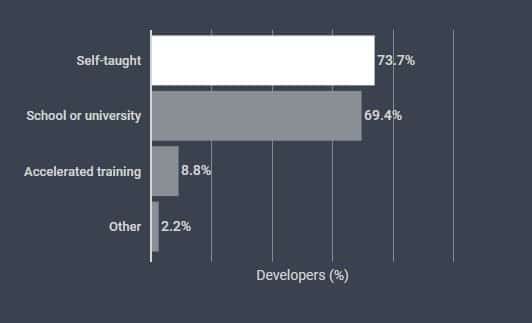 It might not come as a surprise that almost all developers want to learn — and most of them are self-taught.

Today, there are tons of online resources available for every kind of programming language that exists.

Be it from some guy’s channel on YouTube, a freely available MOOC (Massive open online course) or through a book.

“Self-teaching is the norm for developers of all ages. Even though 67% of developers have CS degrees, roughly 74% said they were at least partially self-taught.”

This penchant for online, self-learning has given rise to whole communities of developers that help each other out — Stack Overflow is one of them. It is the largest and one of the most trusted online communities and the by-product of this desire to learn independently without following a particular curriculum. Almost 9 out of 10 developers picked Stack Overflow as a platform they use to learn how to code.

These are the Top 10 Programming Languages in 2017 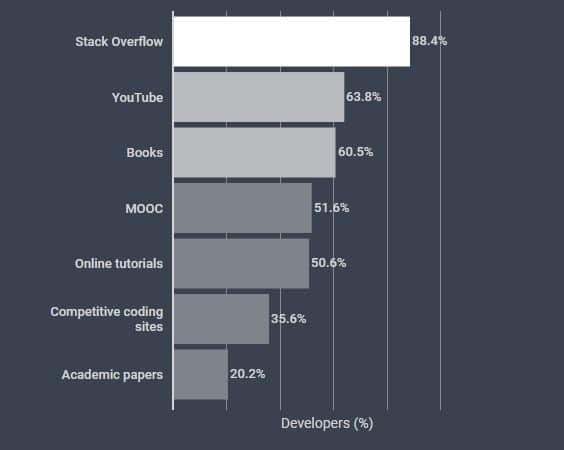 The very nature of learning is changing; younger generations are flocking to YouTube while older generations prefer books to learn new skills.

HackerRank’s survey also took a look at the programming languages and the frameworks that are most in-demand, both from an employer’s perspective as well as from a developer’s perspective.

AngularJS, Node.js and React topped the survey for the most in-demand framework employers want developers to know. In fact, there are way fewer developers that know these frameworks than the employers that need them. According to HackerRank, “Part of the gaps in knowledge could be a byproduct of the fragmented nature of JavaScript.”

As for programming languages, Google’s Go topped the chart for being the language most developers want to learn. Thanks to its Goroutines which offer high concurrency features, combined with some easy-to-write code and fast compilation, Go is considered a very attractive language by many developers. Almost 37.8% of all developers want to learn Go next, followed by Python at 31.6% and Scala at 27.3%.

HackerRank’s survey reveals a clear trend of developers following the lead of major tech companies — Google’s Go, Apple’s Swift being one of the most-sought languages.

Python, meanwhile, claimed the crown for being the most loved language. C took the second spot, followed by C++, Java, JavaScript and so on.

How Do Employers Hire Developers?

Another key area that the survey analyzed was the way employers hire developers, what they look for, the challenges they face, the tools they use, etc.

Some people worry about not knowing enough programming languages or not having the know-how of enough frameworks. If you’re one of them, you will be pleased to know that employers look for problem-solving skills the most. Other experience, although a big plus, still comes second. 94.9% of employers are looking for great problem-solving skills, vs only 56.6% of employers who are looking for programming language proficiency.

As for the challenges faced by employers, what they found really hard is the ability to accurately assess the skills of a developer before hiring them. 8 out of 10 employers said they consider resume screening as the first step in the hiring process. So while you may have a lot of experience and skill, you still need to have a resume that is good enough to get you past the first step.

“According to 7,000+ employers, resumes are still by far the most common way developers are assessed today.”

We have summarised the data, including the most interesting points revealed by HackerRank’s incredibly detailed survey. You can read the full report, along with the detailed analysis of programming trends, over here.