The new Islamabad Airport has started its operations after what seems like forever. Some people have praised it as one of the best that the country has, whilst others have pointed out its shortcomings. But one thing that most of us agree on is that it’s a relief to finally see this project up and running.

For citizens in the twin cities of Rawalpindi and Islamabad, the new airport represents a proud milestone. However, with such a monumental change to the twin-cities’ infrastructure, some people have become quick to exploit the situation to their advantage, by ‘extorting’ and ‘collecting’ a fee in the name of toll tax at the airport.

The Most Comprehensive Look at the New Islamabad Airport So Far! [Photos]

A few days ago, a Pakistani national Raza Jamali recounted his experience of visiting the Islamabad International Airport with his family. What was supposed to be a nice, memorable tour of the airport with some quality family time, turned into quite the sour experience for Jamali and his folks as certain events transpired.

We take a look at what happened and whether there’s more to this event than meets the eye.

Raza, like many others who live in Islamabad and Rawalpindi, was enthusiastic about trying out the new Islamabad Airport. Last week, he managed to fly from Islamabad to Karachi, and back, coming away extremely impressed with the pleasant experience that he had, despite some teething issues that the airport still faces. Pretty upbeat about his experience, he wasted no time in conveying his experience to his family and friends over Whatsapp. It seemed that all was well until he decided to take his family to see the airport again.

On his next trip to the airport from the motorway, he observed that suddenly there was a queue of cars and a toll cabin that didn’t let cars proceed unless they paid a Rs 30 as ‘tax’.

Raza mentions that this toll cabin wasn’t even there a few days back. Despite the minor annoyance, he paid the toll as his family accompanied him and he was in no mood to spoil their experience. However, he did inquire about who was in charge of collecting this toll tax, and that too in a sudden manner.

Raza was informed that an official from the Frontier Works Organization (FWO) ordered the collection of toll so that the roads leading to the Islamabad Airport could be maintained and looked after.

In theory, there’s nothing wrong with charging a toll in order to keep the roads in tip-top shape. This is standard practice in many developed countries as well. As for having the competent authority look after it, the FWO has constructed various roads and infrastructural projects for the administration, so it wasn’t that far-fetched to expect their officials to look after this road’s upkeep as well.

But in Raza’s experience, things started to go really wrong. On his way to the airport, he mentions that he was handed a shabbily scribbled piece of paper that he was informed would serve as his toll receipt. After taking his family to the airport and letting them experience the scale and effort that went into making one of the country’s most advanced airports, it was time to go back home. On his way back, again he had to pass by the toll plaza. Normally, you pay the toll once, and then go back without fuss.

He was asked to pay the toll again on his way back despite him possessing the receipt for the same. Things turned heated as Raza confronted the person who asked him to pay for it again. This time he filmed the whole incident on camera.

It turns out that there was no authorization from FWO itself to collect the toll tax but rather, a corrupt official from the organization may have very well ordered this latest example of ‘extortion.’ Educating people into doing their bit for the country is one thing, but as the video recorded by Raza Jamali shows, it seems there’s no check on public servants to fleece the common man as they see fit.

You can check out the whole exchange here. 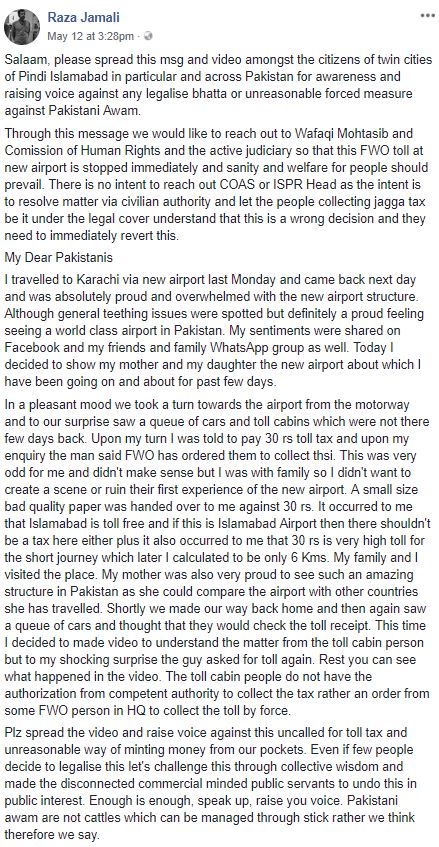 Who do you think is in the wrong here? Is it Raza for protesting the treatment he faced at the hands of officials? Or is it the corrupt officials themselves who are out to make citizens pay ‘bhatta’ for no reason whatsoever?