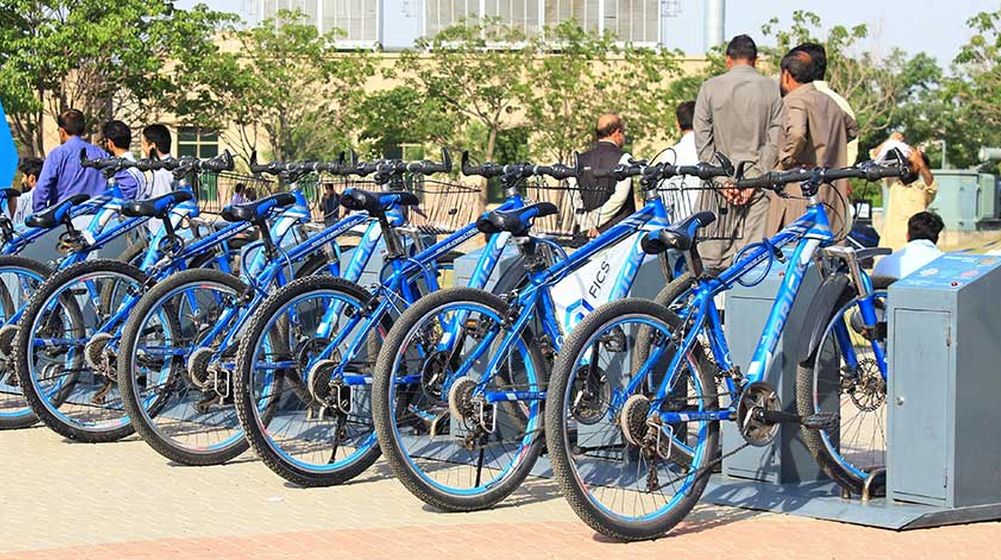 Pakistan isn’t known for having the best transport system. Ride-hailing services like Uber and Careem may have solved the problem of long-distance commuting around the city for millions of people across Pakistan but the rates they charge make them more suitable for longer commutes.

CYKIQ, a Pakistani bicycle-sharing startup has a brilliant idea up its sleeve — it involves renting the nearest CYKIQ bicycle you can find using your smartphone, just like what you would do when looking for a ride on Uber or Careem.

CYKIQ is a dock-less bicycle sharing system to connect places in a closed community. Cycles can be taken from anywhere and parked back in any parking space. And as is true with most of the things these days, the whole process takes place using an app on your smartphone.

CYKIQ was founded a couple of years ago by a group of friends from NUST Islamabad. One of the top 500 universities around the world, NUST’s main campus is spread over 707 acres of land in the capital city’s H-12 sector and they were tired of having to walk long distances from one department building to another.

“We wanted to roam around campus without having to buy a car or even a bike,” shared Ans Shahzad, one of the co-founders of the startup.

While looking for a solution, they came across the concept of bicycle-sharing. A thriving economy in many other countries like China, England, France and more, the system has really caught on and is now considered a really big market.

“Bicycle sharing seemed like the most feasible solution to our problem,” he added.

Not only did it give them the freedom of going about as they liked, but also allowed them to save a lot of money for short-distance commutes. So, CYKIQ came into being as a bicycle sharing startup that used a system of docking stations where bicycles were placed and could be rented using an app.

These days, there are two types of bicycle-sharing systems in place — a docking system and a dock-less system. The docking system relies on creating a network of docking stations with the necessary technology — locks, security system, a mechanism for renting, etc. A cycle can be taken from one dock and placed in another dock as long as they belong to the same system (CYKIQ’s system in this case).

However, the problem with a docking-based sharing system is that it is a huge waste of resources and is also more problematic for users as they can’t leave the cycle at a place convenient to them. In the dock-less system, which CYKIQ now uses, all the technology exists on the cycle itself.
Here’s how it all works,

CYKIQ’s cycles are custom-made, unisex and designed for public use. They are more robust and durable than normal cycles. The seat is adjustable but can’t be pulled off. They use solid, airless tires which won’t go flat. Even the screws used in the cycle are such that they can’t be opened easily. They use Bluetooth locks that directly connect to your smartphone to track your ride. The locks themselves are charged using solar panels built right into the cycle. 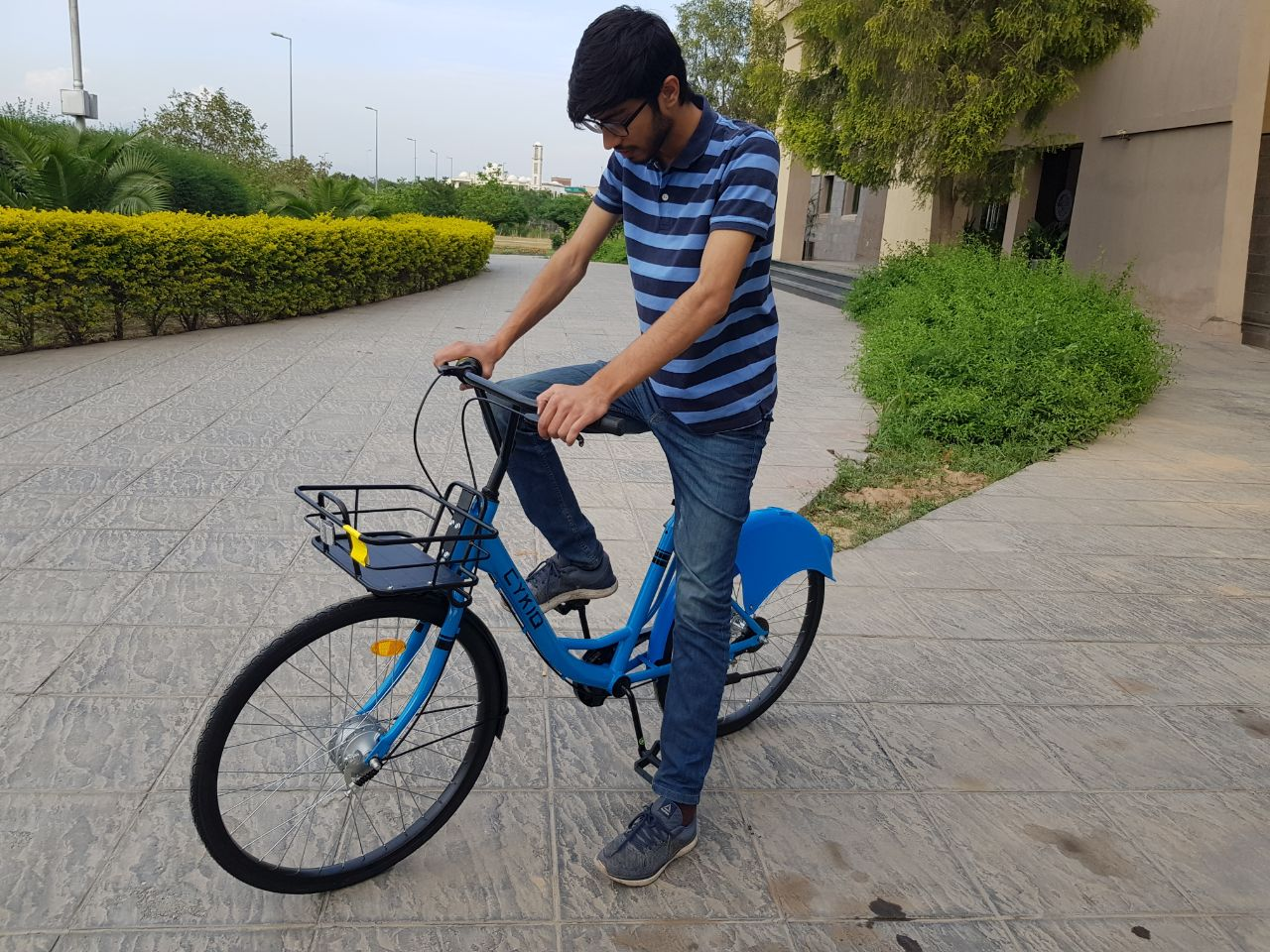 “The initial batch of cycles was manufactured in Pakistan but had a lot of problems,” shared Ans. “We immediately shifted our manufacturing to China, which already has a flourishing bicycle industry.” 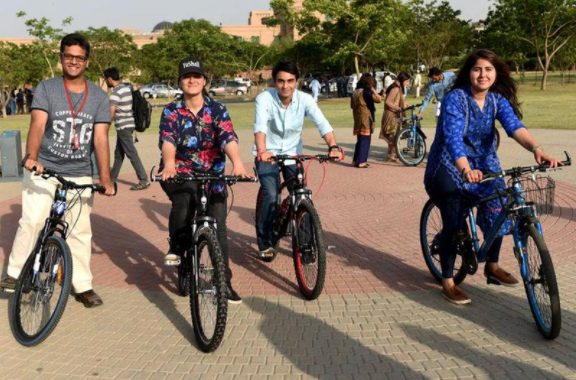 The startup did a limited launch inside NUST’s Islamabad campus with around 10 cycles in 2017 and have grown at a breakneck pace since then. In December, they scaled up to 150 cycles, over 2,000 customers, had done over 8,000 kilometers of rides — in NUST’s campus alone.

Currently, they are only targeting University campuses as they have lots of mobility and walking traffic. Public universities, especially, have large campuses and lots of departments. In September, they plan to launch CYKIQ in Ghulam Ishaq Khan University which is based in Topi, Khyber Pakhtunkhwa, with an area of over 400 acres, as well as University of Peshawar.

“We have plans to launch CYKIQ as a franchise,” shared Ans. “A person, or a group of people, can buy and own the cycles and then use our service to rent them out for sharing.”

How Much Do They Charge?

You can rent a cycle on the go for Rs.15 for 30 minutes. The clock starts ticking as soon as you unlock the cycle till you lock it. They also offer daily, weekly and monthly packages. Most users prefer buying packages as it can bring the price down to nearly Rs.5 per half an hour for monthly packages.

Your CYKIQ account has its own mobile wallet. You can add money to it using SIMSIM mobile wallet service (you can transfer money to your SIMSIM account using any bank account/online account/vendor). They will also be adding EasyPaisa service soon. Moreover, you can also find merchants on the CYKIQ app that can be used to top up your mobile wallet.

CYKIQ was started by Hamza Afridi, an engineer-turned-entrepreneur who has worked with 3 more startups in the past and is now the CEO of CYKIQ. The rest of the team consists of, Ans Shahzad, the COO — responsible for the day-to-day operations; Ammar Tariq, the CCO — handles marketing and planning; and Senam Khan, responsible for the design and the legalities.

They raised a seed round from private investors from which they ran the pilot successfully. Next up, they have plans to expand their services to every large university and then launch their cycles for public use. They are in talks with the government to make cycle stations at Metro Stations in Peshawar which can be used as docking places.

For public use, they already have GPS-enabled locks for added security and are looking into options like Geofencing — where people will only be allowed to park their cycles in certain areas; or else, they will be faced with a penalty.

Bicycle sharing looks like a really promising thing and if CYKIQ has its way, we could soon see it spread throughout the country.