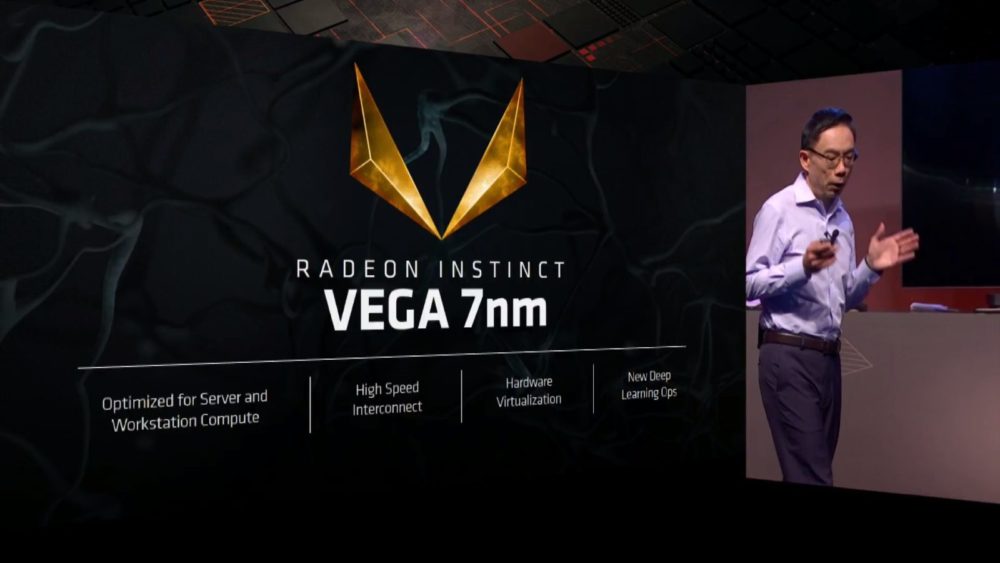 AMD is upping the ante with their new 7nm GPU designed for deep learning. New 7nm gaming GPUs will be launched next year.

The battle for ever-shrinking die-sizes is underway, and AMD is already prepping up to be in as strong a position as possible. The company has unveiled the first-ever 7nm GPU, aimed to enhance accelerated machine learning capabilities, rather than gaming.

Eventually, the improvements in the manufacturing procedure will be translated into gaming improvements, but for now, the 7nm GPU launches as part of AMD’s Instinct line, which features deep-learning focused GPUs. The first 7nm CPU chips are set to come next year.

The advantages due to the smaller size are well-documented and expected. The architecture doubles the density and power efficiency, while also improving the efficiency by 35%.

The numbers don’t end there, as the new GPU also comes with 32 GB of HBM2 (high-bandwidth memory) memory, which is a result of stacking four separate layers around the frame.

Other than that, the details are still scarce, though, the indications are that AMD is still following the same product life-cycles as expected. Gamers can expect to see 7nm chips too, arriving under the Navi lineup sometime next year. AMD also expects to sample 7nm Epyc CPU chips in the second half of this year, with a release for workstations and servers set to arrive sometime during next year.

Instinct chips are likely going to find smaller audiences, with the Radeon Instinct MI6 itself costing $2000.

The new Instinct chip is being rolled out for further sampling by AMD partners, and are expected to launch for workstation environments by the second half of this year.