Patari, which is in the news for all the wrong reasons lately, was caught demoting the soundtrack of Faris Shafi — Meesha Shafi’s brother — because the music streaming platform had allegedly teamed up with Ali Zafar, Dawn Images has reported.

The allegations come at a time when Patari is in a serious management crisis. The core-team announced that it was parting ways with the company after Patari allegedly failed to sideline Khalid Bajwa, the former CEO, who is currently under internal investigation for sexual harassment.

The paper got a hold of a screen-shot of internal communication within Patari, where Faris Shafi’s soundtrack was deliberately moved by the team to the end of the listing. 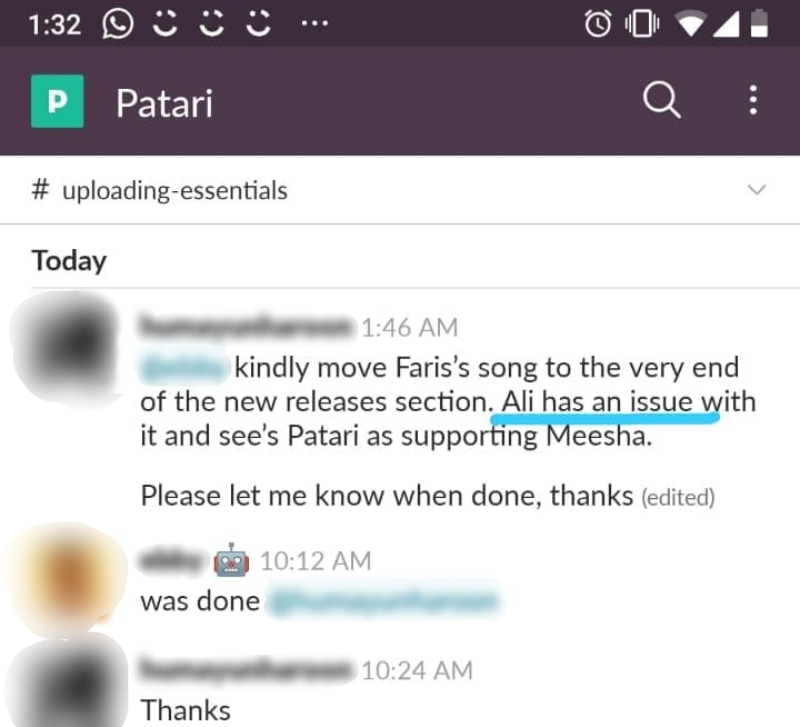 As apparent from the screen-shot above, Patari honored Ali Zafar’s request to demote a track.

Rabeel Warraich, the key investor in the firm and currently the interim CEO, confirmed to Dawn images that the screen-shots were legit but said that the leaked screen-shot was not only unethical but also a serious criminal breach.

Rabeel further explained that there’s lack of editorial policy at Patari and it deals with matters on a case-to-case basis.