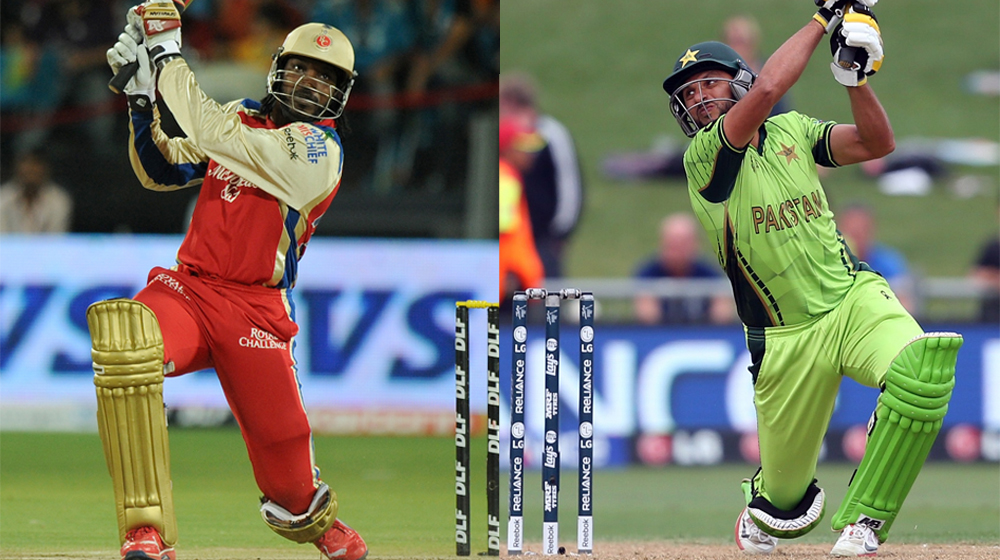 In the third and final one-day international between West Indies and Bangladesh, Chris Gayle smashed five sixes and has equaled Shahid Afridi’s record for most sixes in international cricket.

The smash hitter, Gayle, raced to his 73 run innings from just 66 balls managed to hit fix enormous sixes to equal the record at Warner Park in St. Kitts.

Shahid Afridi was previously the sole record holder but now shares his tally of 476 sixes with Gayle, who can easily surpass him in the next series.

Boom Boom, however, managed his 476 sixes in 524 matches whereas Gayle managed it in just 443 matches.

Having said that, it is important to highlight that Gayle has played 81 lesser matches than Afridi as the latter started his international journey sooner.

Fakhar Zaman Most Prominent as Pakistani Squad Gets Ranking Updates

This reflects supremely well on Afridi’s record that he led the record despite playing a low number of innings compared to the other candidates.

West Indies play Bangladesh in a T20 series next where Gayle is also a part of West Indies squad. This would be a golden opportunity for Chris Gayle to break the record.

Since the record is of international cricket, there are three main formats which have been approved by the International Cricket Council (ICC) — One-Day Internationals, T20 Cricket and Test matches.

The record does not include sixes from the 4-day matches or the domestic domination of both hitters. Here’s how the breakdown looks like:

Here is the complete list of top-ten bastmen with most number of sixes in international cricket: