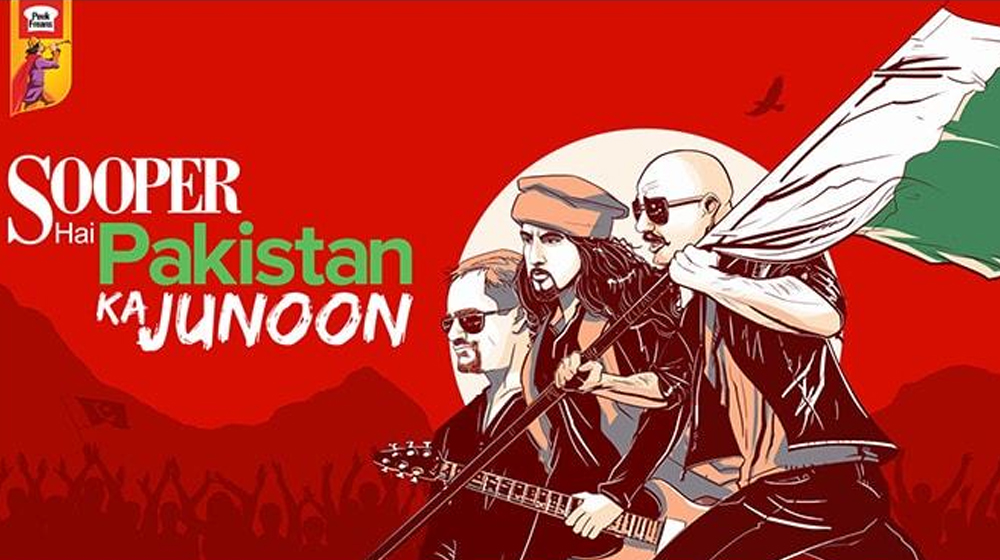 When a tornado gets mixed up with a volcano, the result is spellbinding. Junoon’s latest retro musical treat, “Khudi”, has had more or less the same effect on its fans. With news of the band’s reunion taking over the airwaves, it seems that all that anyone can talk about is the dynamic trio, namely Ali Azmat, Brian O’ Connell and Salman Ahmed.

Being a 90s kid, I still remember how Junoon used to rule the crowd with its powerful presence and fiery energy. More than any other song, “Khudi” was the one that made listeners go gaga over its absolute spot-on feel of being a rebellious soul while striving hard for excellence. Considering Pakistan was set to celebrate its 72nd Independence Day, it seems fit that Junoon chose “Khudi” to represent the ambitions of the nation.

Absolutely nothing can beat the feel of the soul-stirring poetry penned by Allama Iqbal, further enhanced by the awesomeness of Junoon. Despite a gap of nearly 13 years, the dynamic trio, Ali Azmat, Salman Ahmed and Brian O’ Connell nailed it with their electrifying performance making it seem like they had never left in the first place.

Of course, none of this would have even been possible without Peek Freans Sooper. The Herculean task of bringing some of the biggest heavyweights of Pakistani rock music was no small feat; yet, Peek Freans Sooper managed to pull it off with ease, all for the sake motivating the youth and pushing them to believe in themselves so that they may collectively excel as a nation.

In his trademark Sufi ensemble, Salman Ahmed, the lead guitarist of the Sufi-rock band, mesmerizes the audience with his signature guitar riffs, while ever the rock star, Ali Azmat, sets the stage on fire with his earth-shattering vocals. Brian, wearing a colorful long coat, as always the picture of peace and serenity, continues to support the band with his strong base.

The video, true to the sentiment behind “Khudi”, showcases young and energetic people all of whom represent the top achievers Pakistan has had the pride to produce. They include Fakhar Zaman, the first Pakistani cricketer to score a double century, Laraib Atta, Pakistan’s youngest ever visual effects artist who has had the privilege of working for big Hollywood projects like the recent Mission Impossible 6: Fallout, Shaheer Niazi, Pakistan’s youngest scientist and Ronak Lakhani, one of Pakistan’s leading philanthropists.

Peek Freans Sooper gifted the people of Pakistan the independence gift of a lifetime by bringing Junoon back as a band once again. Here’s to hoping they continue to make music for the benefit of Pakistan.