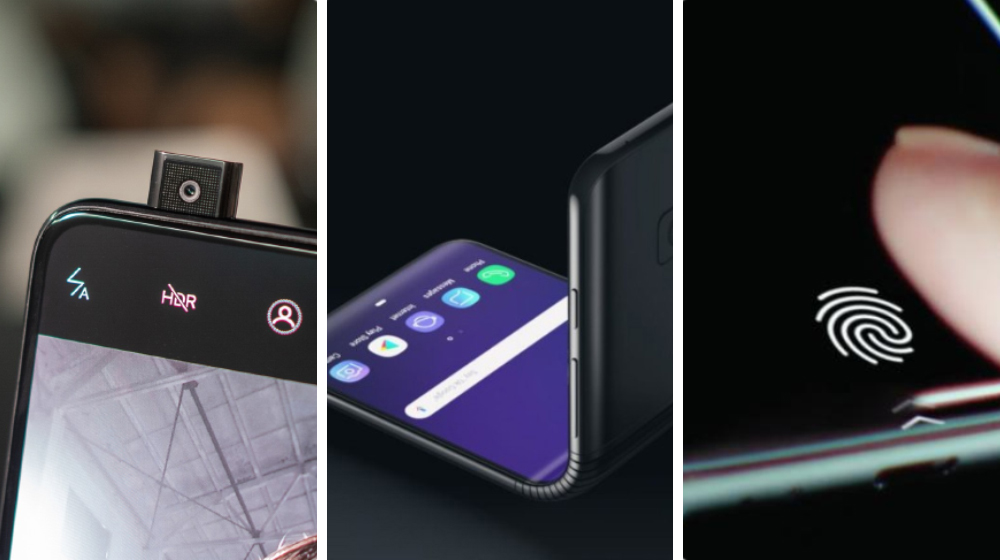 All the good (and weird) stuff coming to smartphones in the next year or so.

When it comes to tech, the smartphone industry sees the most volatility and changes when compared to PCs, laptops and other gadgets.

To give you an idea of the pace of things, consider the fact that bezelless Smartphones weren’t a thing until 2016 when Xiaomi announced their first Mi Mix phone. Since then, nearly every major smartphone company has hopped on the bezelless bandwagon, including Apple (iPhone X), Samsung (Galaxy S8/S9, Note 8/9) and Huawei (Mate 10 series, P20 series).

Compare that to the average laptop, for example, and they look pretty much the same as they did nearly a decade ago. Design-wise, they tend to get slimmer and smaller, but its not often you see laptop makers deviating from how laptops generally look like. We just see the hardware in those laptops getting refreshed from time to time.

With Apple releasing its newest iPhones today, now may be a good time to look at some of the major design overhauls coming to smartphones. Unfortunately, based on rumors, Apple hasn’t drifted away from its notched design yet, so nothing new on that front. But that doesn’t mean that the likes of Samsung, Huawei and other Chinese companies aren’t doing anything.

Here’s what’s coming to the smartphone world in the near future.

What’s better? A tablet? Or a smartphone? Why not both at the same time?

Arguably the most futuristic design trend coming soon to smartphones is foldable design. Not only does it allow for bigger screens in smaller form factors, it also makes them less likely to break as the display remains covered up.

Samsung, Huawei, Oppo and Xiaomi have officially announced their plans for a foldable smartphone. For Samsung’s idea, the phone folds in the middle, something like an old flip phone but with a screen covering one side completely.

The first image kind-of reminds me of the ill-fated LG G Flex, which didn’t really catch on.

Huawei is working on something similar but the hinge in the middle is different:

It folds fully, without leaving a sizeable gap (like with Samsung’s design) in the middle, which is a good attempt and looks better, aesthetically speaking.

Next in line we have Oppo and Xiaomi. Unfortunately Xiaomi didn’t reveal any design schematics or concepts for their foldable phone, but we do get to see where Oppo is going with their idea:

This looks more like a foldable tablet (kind of like a book) than a smartphone. It’s like the ZTE Axon M but with a better and more immersive display, the implementation is all that counts and ZTE didn’t quite pull it off:

Instead of being a full format screen, the gap in the middle added by ZTE (as a stopgap) just can’t be ignored. It makes the overall experience less savory, and looks like two phones glued together.

Nonetheless, this is a new avenue of design for smartphones and there’s a lot of potential here. We will be seeing the first foldable phones (not counting ZTE) in 2019.

This one started all thanks to Vivo’s quirky Apex concept phone, the first ever to come with a camera module. Vivo also gets the cake for another major design innovation, which I’ll talk about later.

The camera on the Vivo Apex could slide up on demand when you turned on the front camera, leaving more room on the front of the phone for the screen and other essentials.

With this innovation, Vivo further reduced the bezels on their phone, improving the overall immersion and aesthetics of the Apex (and the follow up of that, Vivo NEX). Oppo then took it one step further and added rear cameras as well as other sensors for 3D face unlock, just like Apple’s iPhone X, to the camera module. Thus, the camera slider/popup camera became a thing.

Xiaomi and Lenovo have also announced similar sliding cameras for their upcoming Mi Mix 3 and Z5 Pro respectively. However, in their case, you have to manually slide the screen up and down to reveal the cameras. There’s no automatic motorized camera slider here unlike those in Vivo and Oppo.

Both companies haven’t announced an official release date for their phones, so your guess is as good as mine. Nevertheless, we’ll see some of these phones with sliding camera shenanigans in 2019.

Jokes aside, the smartphone industry does seem to be moving towards adding multiple cameras on smartphones. Dual camera phones became a thing in late 2017 and 2018 so it’s only natural that we get more cameras added to smartphones in the future. Huawei’s P20 Pro was the first to feature three primary cameras, and now rumors point towards a triple cam iPhone. In fact, Samsung also seems to be working on a triple camera Galaxy S10 for 2019.

Why Companies are Adding More Cameras

One involves using a black and white camera and a regular RGB camera in tandem, which enables them to capture much more detail in low light scenarios. Low light performance has always been a bane for smartphones so this idea is very popular.

The other involves using a Wide-angle+Telephoto lens, which lets you capture those sweet looking portrait shots with bokeh or background blurring effect. Some companies do it through software as well, and also by using a single camera. However, it doesn’t always turn out right.

The third type is the “fake” type. These devices just have another regular camera next to their main camera, which actually serves no purpose at all. It just makes you look like a sophisticated person, if that’s your thing.

Huawei P20 Pro has the best implementation of multi camera setups yet, with both wide-angle-telephoto and Black and White-RGB included. This not only lets the capture impressive shots with an authentic depth-of-field effect, it also enables great low light snaps for an all round camera experience. It’s also rated the best on DxOMark among other smartphones for this reason.

There’s always that one guy that goes too far in copying others. In this case, Nokia went one step ahead and is rumored to be working a phone (possibly Nokia 9) with 5 rear cameras!

Looks hideous, to be honest, but I’m sure some would like the design. Nokia 9 hasn’t been confirmed yet, and I’m not sure what those extra cameras even do, but Nokia was once famous for its camera performance (notable the Windows-powered Lumia Phones) so fingers crossed for what they have in store for us.

Unless we see drastic improvements in single camera performance, it’s safe to see multi camera phones coming out over the next few years.

This one isn’t exactly a new trend, just not that mainstream for now. Hence it deserves a mention here.

For those who are unaware, a “waterdrop” notch display is the smallest possible notch on a smartphone yet. Not only is it less obtrusive (as opposed to iPhone X-style massive notch) it makes the illusion of a bezelless screen look even better.

Going forward, it’s highly likely to catch-on, at least for the mid-range smartphone market. Flagships might not hop on the waterdrop bandwagon, as we’re heading towards the era of fully bezelless phones and camera sliders that eliminate the need for a notch.

Recent examples of a waterdrop notch include the Vivo V11 and V11 Pro (pictured above), as well as the upcoming OnePlus 6T and Oppo R17.

Like the waterdrop notch, this one isn’t exactly new either, but it hasn’t seen mainstream use yet. Like the name suggests, the fingerprint reader is inside your phone’s display, which means you won’t have to reach behind your phone or at the bottom of the screen to unlock it. Just tap the screen briefly and it unlocks.

There’s just a handful of smartphones using an in-display fingerprint reader right now and most of them are made by Vivo. Only recently Oppo added it in their Find X flagship and Xiaomi also joined in with the Mi 8 Explorer Edition. OnePlus has also recently confirmed its presence on their upcoming 6T smartphone.

Here’s the main question in-display fingerprint sensors are facing: why do you need one? For all we know, the regular fingerprint scanners work fine, so what purpose does this type of scanner serve?

It enables more space on the phone for one, since manufacturers won’t have to add a regular fingerprint reader at the bottom of the phone. It also makes space for other stuff to be added to the phone (5 rear cameras anyone?).

In short, it’s the next step in smartphone design which enables smartphone companies to experiment more with their phones’ designs. In all honesty, it does look pretty cool when you use it. If nothing, the cool factor alone is what most people will buy a phone for.

If reports are believed, the upcoming Xiaomi Mi Mix 3 and Lenovo Z5 Pro will both feature an in-display fingerprint reader. Samsung is also rumored to include on in the Galaxy S10.

Unfortunately, from what we’ve heard, Apple is sticking with 3D face unlock on the iPhones for now. Expect major companies like Samsung, Apple and Huawei to start adding in-display fingerprint readers to their phones from 2019.

Which one of these are you looking forward to? Is there anything I missed? Mention it in the comments.