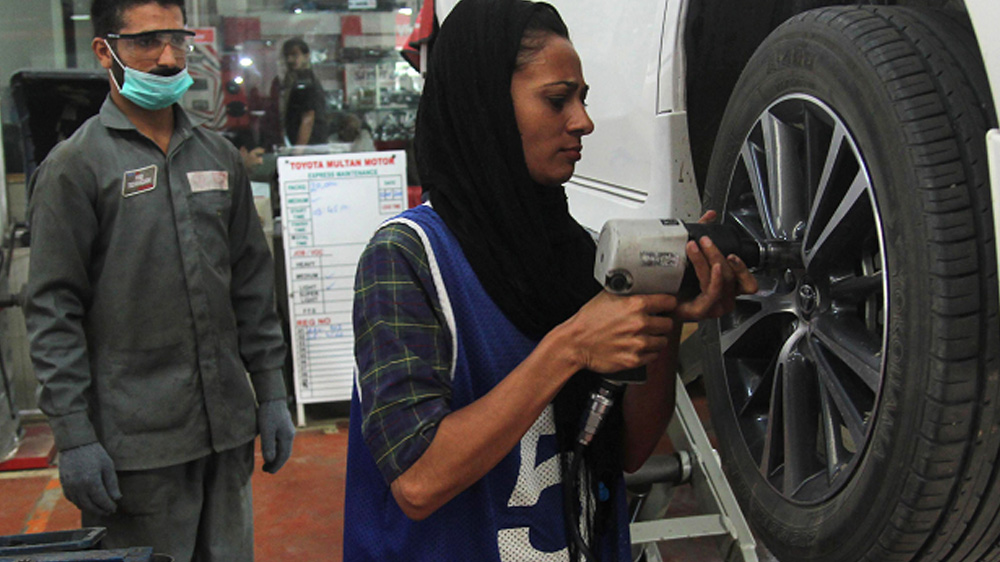 “No hardship could break my will and emotion.”

These are inspiring words from Uzma Nawaz, a 24-year old lady who, despite all odds, made a name for herself as one of the first female car mechanics in Pakistan. In short, not only does she know her way around cars, she can fix them like a professional as well.

Uzma recalls that she had to spend years before she could reach this stage. She had to contend with gender stereotypes and a dismal financial situation through most of her life. Her family lived an impoverished life in a far-flung village in Punjab, and that needed to change.

Her first goal? To earn a degree in mechanical engineering.

Her decision was all the more surprising for many since Uzma’s family hails from Dunya Pur village in Punjab. Her family’s financial situation was dismal, and Uzma decided that come what may, she will do everything in her power to uplift them.

She recalls how hard it was to achieve her goals. She used to skip meals when she had no money, and had to rely on scholarships after proving her mettle academically, as she went about pursuing her degree.

After overcoming countless hurdles, she managed to earn her degree and soon after, took a job with an auto repairs shop in Multan.

A Woman in a Man’s World

Her presence in the Toyota dealership garage was greeted with shock and surprise, given as how people are not used to seeing a female mechanic, and that too in a predominantly traditional Multan of all places.

In Uzma’s ancestral village, most women are married off young and told to devote themselves to family instead of working.

A lot of customers who walk into the Toyota dealership where Uzma works are left aghast at first. They see a woman who works like a pro, has no issues handling heavy equipment such as tyres,  tinkers with engines, and handles specialized tools for auto repairs effortlessly. After all, its not something we see everyday.

Uzma didn’t stop here. After serving at an entry level position for a year there, she got promoted to general repairs. Her supervisors are confident of her capabilities and this is in turn reflected by the work and responsibilities she juggles with aplomb.

Her colleagues are proud of her, and confess that she can handle more than what people give her credit for.

“Whatever task we give her she does it like a man with hard work and dedication,” said co-worker M Attaullah.

A Shift in Attitudes

Uzma’s journey is all the more significant given how it has changed attitudes towards letting women work in what were previously thought to be male-dominated gigs. In eastern Punjab, where patriarchal attitudes prevail, Uzma had to convince her folks first why she needed to do this.

Her father, who tends to cattle in their village in Dunyapur, was reluctant at first. However, he respected her choice to work and follow her passion.

“There is no need in our society for girls to work at workshops, it doesn’t seems nice, but it is her passion,” says Muhammad Nawaz, her father.

But now, he can barely hold back his pride after seeing what his little girl has accomplished in life.

“She can now set up the machinery and can work properly. I too am very happy.”