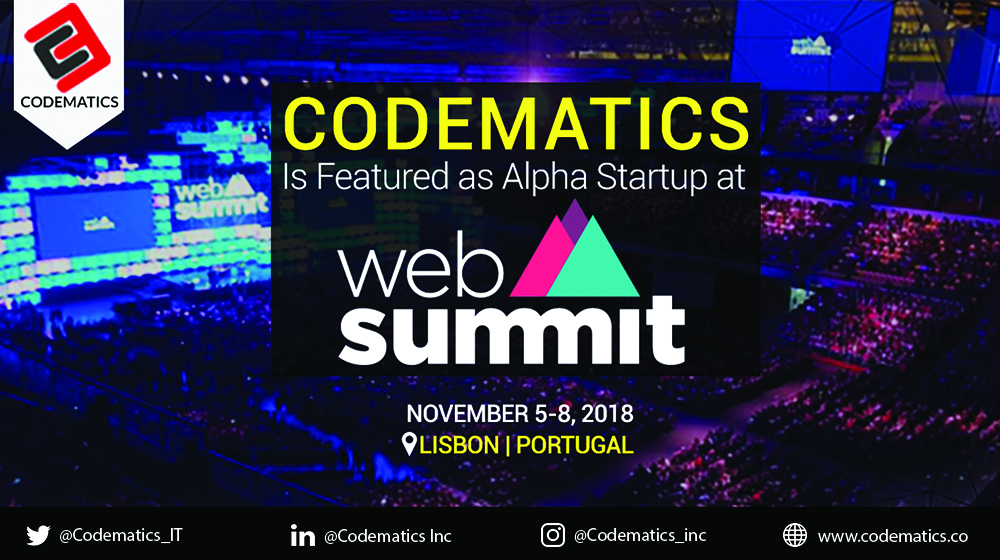 Codematics was featured as an Alpha Startup at one of the biggest tech conferences, Web Summit, held in Lisbon, Portugal between 5th-8th of November 2018.

It’s another milestone that the company has achieved in an International Tech Platform to make Pakistan feel proud. Prior to this, Codematics was the only IT company from Pakistan that had a strategic partnership with Google Inc. in the Asia Pacific region.

Regarding the Web Summit, it is known as the world’s biggest tech conference where the digital future of the world is shaped. The conference is joined by tech giants, business strategists, influencers, investors, experts, and professionals from around the world. The list includes Microsoft, Cisco, BMW, Huawei, Airbus, Google, IBM etc.

Through this platform, the startups around the world get an opportunity to present their business ideas to the international business audience. For Codematics, its major product was a Universal TV Remote Control App.

This app is making people’s lives easier by allowing to control televisions using smartphones. Also, it is the only app by Pakistani developers to cross 50 Million downloads on the Google Play Store.

“We only had 7 TV brands included in the app when we launched it initially. Now Universal TV Remote application works on approximately a total of 500 TV models from different brands,” says Codematics’s Founder & M.D Malik Ahsan Ali.

He further added, “The major challenge we faced was when different OEMs like Samsung blocked producing IR blaster in the phones. This made us think hard and with the advent of technology, we adopted and now Universal TV Remote Control also supports various smart TVs.”