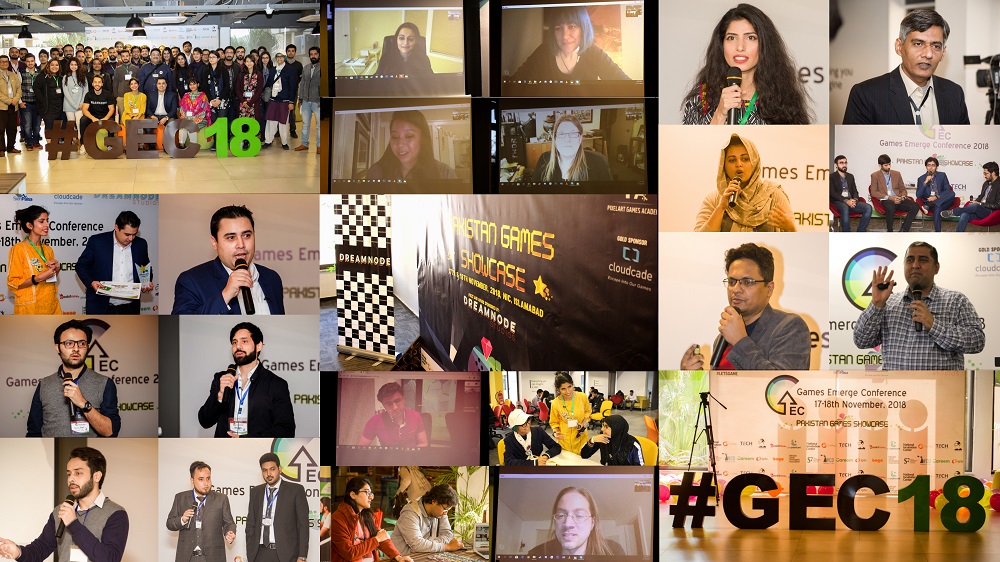 The first day of the conference kicked off with Sadia Bashir, CEO and Founder of PixelArt Games Academy, welcoming all the participants and speakers, thanking the sponsors and supporting partners of the conference.

Asad Raza, CEO SimPaisa, the Silver Sponsors of GEC, took the space to speak about their products and services. Next up was a highly passionate talk by Asfandiyar Khan, CEO of Dreamnode Studios and GEC’s platinum sponsor. Shayan Zaeem, representative of Cloudcade (GEC’s gold sponsor), and co-founder of Fizz Inc, took the stage and spoke about quantifying chat.

Then Farah Ali, VP Engineering at Electronic Arts, joined us from Bellevue (USA) via Skype speaking about the demands of modern gaming leading to the artificial intelligence in creating realistic character behavior and generating epic world environments.

Veteran game artist Mehran Khan took the stage and provided a comprehensive insight into the various branches of game art an aspiring game enthusiast can go into.

Abeer Kaisiri’s presence was a relief to artists in the hall who had grown tired of technical talks. She talked us through the life and hurdles of being a concept artist in the game industry. The day ended with Brie’s QA Session with the audience, building on her vast years of experience.

The next speaker was the biggest highlight of the GEC, Kate Edwards, her talk was about how developers can take steps to change the public perception of games and game creators. Then came Celia Hodent, who spoke on a number of techniques that her team used in Fornite, to make it the massively successful game it is today, and can be used by game developers to craft their own games.

Later that day, Umair Azfar Khan gave his session on how we can introduce game programming in courses. The second day ended with Sadia Bashir, Haider Shishmahal and Ian Schreiber’s Game Design workshop, a hands-on workshop that took participants through the process of coming up with ideas for games and taking them to rapid paper prototypes.

Apart from the talks, another huge thing took place at GEC 2018. Pakistan Games Showcase and Awards, the first of its kind in Pakistan. Five games were displayed that were Galaxy Under Attack by HalfByte Studios, Dragon Combat 3D by Sablo Studios, Hogi’s Adventure by Malistic Studios, Shakari by PixelArt Interactive Studio and Socialite by Sadia and Haider.

After the praise from the attendees and decision from the jury, Dragon Combat 3D by Sablo Studios won the Pakistan Games Showcase and were given 30,000 PKR cash prize from the Platinum Sponsors of GEC – Dreamnode Studios, Careem Credit voucher worth of 10,000 PKR and an award.

Games Emerge Conference 2018 turned out to be bigger and better as compared to the last years’ with the special support from our partners including bogo.pk, ProPakistani, bookitnow.pk, Tech Pakistan, IGDA, National Incubation Center, Teamup, Careem, Shaoor Foundation for Education and Awareness, Media Click and Women Can Do.