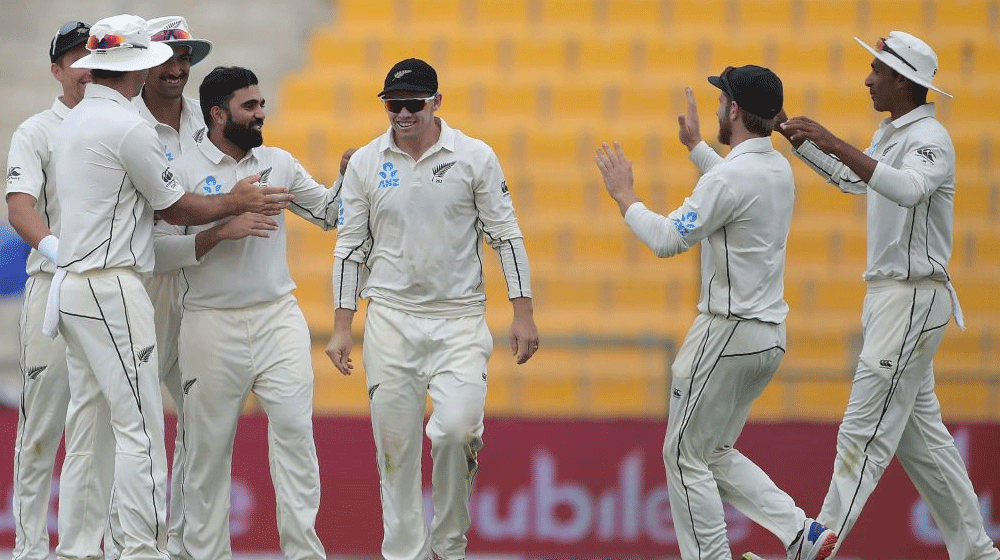 New Zealand came from behind to beat Pakistan by 123 runs on the fifth day of the third and final Test to win the series 2-1.

In pursuit of the 280-run target, Pakistan’s innings was wrapped up for 156 runs despite some resistance from captain Sarfraz Ahmed and Babar Azam.

This defeat is a clear sign of worry for the Green Caps as this is their second cleavage in the ‘UAE fort’ in one year.

Both series loses in UAE have come under the captaincy of Sarfraz Ahmed, who is admired for being one of the brightest in the shorter format, and coach Mickey Arthur, who’s been anything but helpful for the players during the tough times.

Pakistan, despite early hiccups, went on to post 348 runs in their first innings, thanks to brilliant hundreds from Azhar Ali and Asad Shafiq.

Having a lead of 74, Pakistan picked up four of Kiwis’ wickets in the second innings, being on top of the game on the back of Yasir’s record-breaking bowling, until Williamson and Watling stole the thunder.

Pakistan top order crumbled to pressure once again with both centurions of the previous innings returning to pavilion for five runs in total.

No batsman other than Babar Azam (51) and Sarfraz Ahmed (28) cross the 25-run mark, with opener Imam-ul-Haq making 22, his second highest score of the series (the highest was 27 in the first Test on the same venue.)

Yasir – The Only Take-Away for Pakistan

The only good memories for Pakistani fans in the series was Yasir Shah’s brilliant bowling throughout. He took record 29 wickets in just three matches to equal Waqar Younis’ record.

In the process, he thrashed Australian legendary leg-spinner Clarrie Grimmett’s 82-year-old record to become the fastest to take 200 Test wickets.