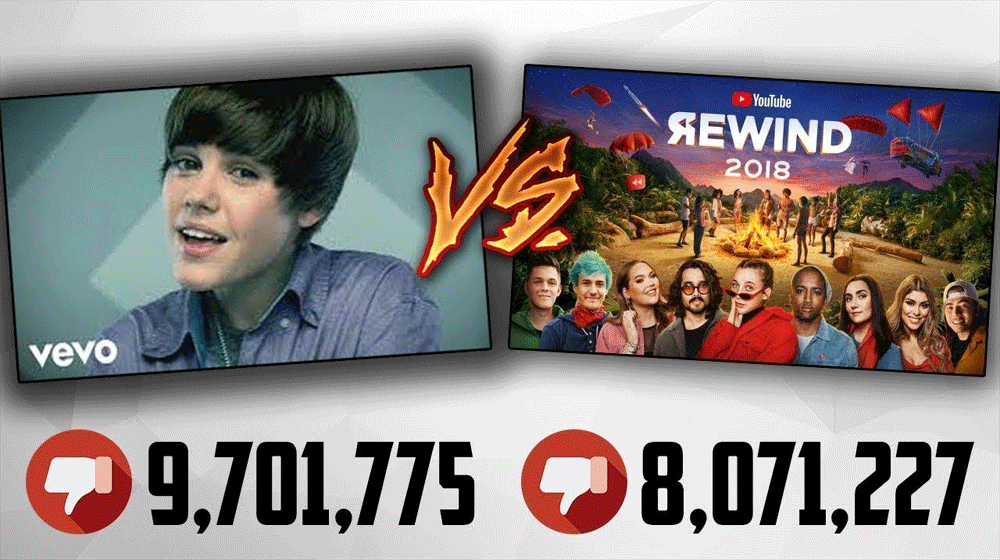 Bieber’s “Baby” is now the second most disliked video on YouTube.

Remember when we told you a couple of days ago about how YouTube rewind has gone to become the second most disliked video on the site, just below Justin Bieber’s ‘Baby’ video? Well, it has now snatched that ‘honor’ from Justin.

This means that all the ‘hate’ Justin Bieber’s song ‘Baby’ attracted in last eight years, YouTube Rewind did in just eight days!

Last time we checked, YouTube’s annual recap video had racked up, 7.7 million thumb-downs in five days. In two more days, the video went on to gather over 2.5 million more dislikes to trash “Baby’s” record of 9.9 million.

While comparing the videos, one should keep it in mind that “Baby” was posted all the way back in 2010 and has 2 billion overall views while YouTube Rewind was just posted 8 days ago on last Thursday and has just 128 million views.

We tried to figure out the reasons behind this backlash, and it turns out no one but YouTube itself is to blame.

If you dig into the comments section and the chatter about this video, one reason that stands out is YouTube omitting some of the platform’s biggest stars in the video.

YouTube dumped the likes of Shane Dawson, Logan Paul, and PewDiePie and of course, the clips from that boxing match between KSI and Paul that attracted more than a million views live.

The video itself wasn’t exactly up to the mark either, which gained the ire of many viewers.