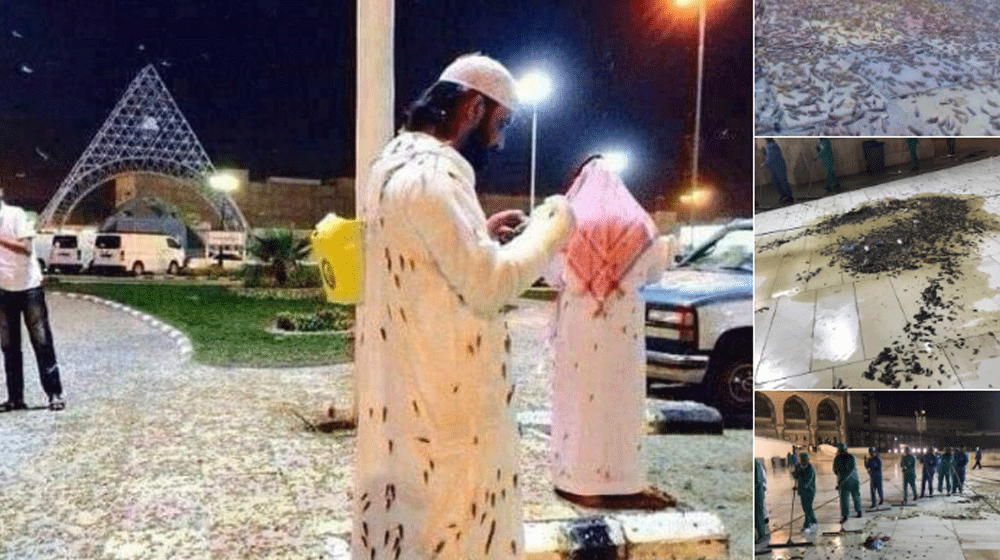 A swarm of black crickets has stormed into the holy mosque of Makkah and the city, leaving residents speculating different theories, confirmed media reports.

People say they have never seen this species of insect swarming the city in such huge numbers ever before.

Makkah Municipality also confirmed that citywide fumigation is being carried out to get rid of the ‘massive cricket swarm.’

Residents of Makkah say they have never seen such scenes in the city ever before.

“On Saturday night I was praying at the Holy Mosque, and the insects were everywhere, the mosque was drawing them in, not only in the yards but even around the Kaaba,” Abdulwhab Soror, 64, told The National.

“I’ve been living in Makkah my whole life, and I’ve never witnessed something like this before,” he added.

The phenomenon has perplexed the wildlife experts as well.

Manager and scientific adviser of terrestrial biodiversity at the WWF and Emirates Nature, Dr Jacky Judas also confirmed this happened for the first time.

Dr Judas said some businesses in the Arabian Peninsula, that breed crickets for bird feed, might be the source of this ‘cricket storm.’ He said there are possibilities that the captive insects could have, somehow, escaped and stormed into Makkah.

The city municipality has appointed 130 workers to clean the city.

In a statement, the authority said they were focusing on the reproduction and breeding of the species and have fumigated sewers and open water sources around the Holy Mosque.

Most of the Haram Sharif has been cleaned, updated Pest Control Service.