The State Bank of Pakistan has released its first quarterly report on the ‘State of Pakistan’s Economy for Financial Year 2018-19’.

According to the report, the overall macroeconomic environment remained challenging during the first quarter of FY19.

The fiscal deficit widened to Rs. 541.7 billion growing by 18.62% during the first quarter (July-Sep) of the current financial year 2018-19 compared to Rs. 440.8 billion during the period under review.

However, the overall fiscal deficit increased by Rs. 100 billion, or 0.2% of GDP, on a YoY basis.

The State Bank said that the fiscal deficit increased to 1.4 percent of GDP in Q1-FY19 as compared to 1.2 percent recorded in the corresponding period of FY18. 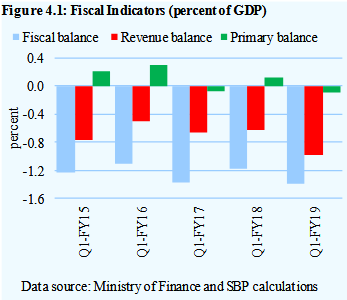 While the overall expenditure growth remained unchanged despite a sizeable cut in development spending, it was the marked slowdown in revenue growth that increased the fiscal gap.

Overall the government had to face a revenue shortfall as it fell short of the rise in the current spending as well as non-interest expenditures which weakened the government’s capacity to finance its operational expenses which made it challenging for them to manage the debt.

According to the report, the decline in tax revenues was due to;

On the expenditure front, the major challenge was the steep rise in debt servicing payments, which grew by 13.9 percent during Q1- FY19 compared to 7.5 percent last year.

However, non-tax revenues posted a significant increase of 11.6%. Despite a sharp growth in current spending, a significant cut in development expenditures led to the overall deceleration.

The report said that due to a slowdown in revenue collection and expenditure severities, the government had to cut discretionary development expenditures in order to keep the fiscal deficit under check.

The pace of revenue collection slowed to 7.5 percent during Q1- FY19 compared to a substantial growth of 18.9 percent observed during Q1-FY18, said SBP.

According to the Central bank, the provincial current expenditures rose 21.9% due to increase in spending towards educational affairs, general public services and public order.