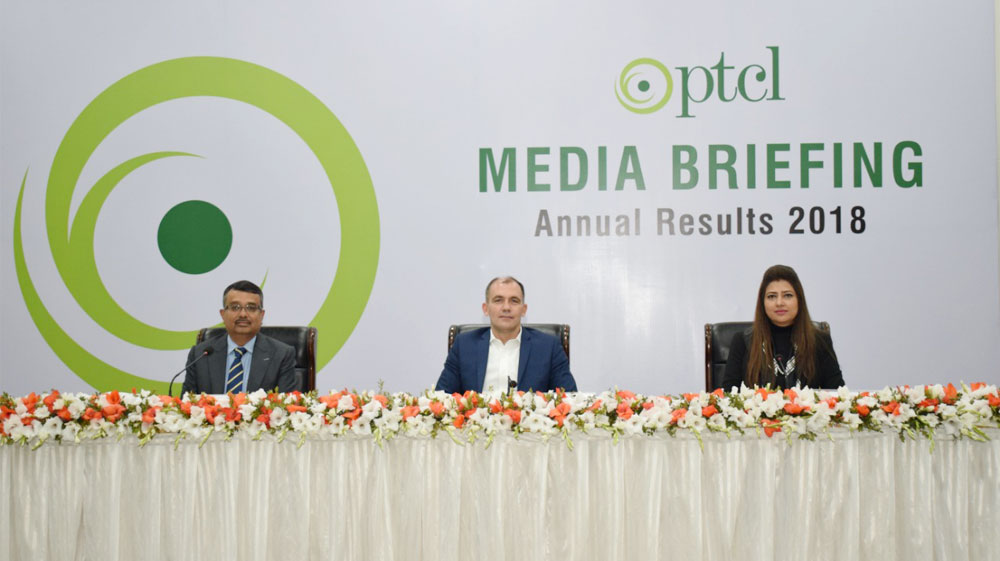 Pakistan Telecommunication Company Limited (PTCL), the country’s leading telecom and ICT services provider, has announced its financial results for the year ended December 31, 2018, at its Board of Directors’ meeting, held in Islamabad on February 12, 2019.

PTCL Group’s revenue for the year 2018 has grown YoY by 8% to Rs. 126.2 billion as a result of positive contribution by all group companies. PTCL Group’s revenue growth in the fourth quarter accelerated to 13% YoY. Ufone revenue has increased by 13% YoY, UBank – a microfinance banking subsidiary of PTCL – has shown significant growth of 64% in its revenue over last year. PTCL Group’s operating profit and net profit for the year have improved by 198% and 32% respectively. Likewise, the net profit of PTCL Group is higher by 22% compared to last year.

In 2018, three-quarters of PTCL’s revenue base has shown growth over the last year. PTCL’s flagship Fixed Broadband services posted revenue growth of 6.5% over 2017. For the 51 exchanges fully transformed to date under the network transformation program YoY revenue growth is even higher at 12.4%. Investment in transformation of network exchanges has resulted in enhancing customer experience by reducing network faults by 36% and repeat faults by 50%, along with providing higher bandwidths beyond 100Mbps, bundled with Triple Play services. To further enrich the product and services portfolio, PTCL has partnered with the global OTT players like Netflix, STARZ Play, icflix, etc. PTCL has also been recognized by Brand Finance as the ‘Fastest Growing Brand in Pakistan’.

Corporate business continues to perform strongly and has shown significant growth of 13% over last year by signing new customers in Managed Services and Cloud Infrastructure Services resulting in 154% and 188% growth respectively in these two segments.

Conversion of EVO customers to Charji/LTE have yielded positive results with YoY revenue growth in double digits, however, it has also resulted in higher subscriber acquisition cost as compared to last year. There is a continued decline in domestic and international voice revenues due to an increase in illegal/grey traffic termination, continued conversion of subscribers to OTT and cellular services, resulting in declining voice traffic volumes.

In 2018, the financial strength of PTCL was acknowledged through an independent rating exercise as a result of which JCR-VIS has assigned PTCL a long-term rating of AAA which will enhance all stakeholders’ confidence in the long-term sustainability of the Company.

This year yet again, PTCL has inducted top 100 young engineers and business graduates under Summit Program 2018 from top institutions and universities across Pakistan, which would help in building future leadership. Thanks to its sustained high growth, Ubank has created more than 650 new positions during 2018, increasing its employee base from 1,321 to 1,980, where 9% of the total workforce comprises of women.