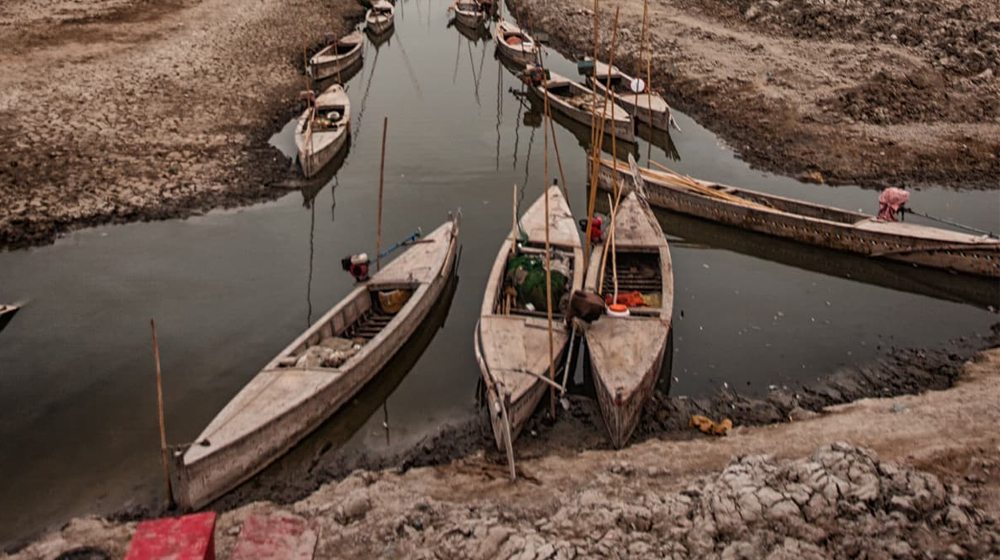 Spread over 250 square kilometers, Manchar is Pakistan’s largest freshwater lake. Once known for its sparkling water, widely dispersed boathouses, and abundant fish, it is now turning into a health hazard while leaving its residents destitute.

Machar Lake has been home to the indigenous Mohana tribe for ages, which relies solely on the lake for its subsistence. However, as the lake is shrinking continuously and its water getting polluted, the hundreds of boats that used to ply on its shallow waters have now reduced to a few dozen.

Containing around 50 varieties of fish, the Manchar Lake used to be abundant in fish.

However, there is only one kind of fish available now, which is small and is used only as animal feed. This fish is sold for Rs. 5 per kg in the market. Even that kind is not enough, as a total of 200 kgs of fish caught from the Manchar Lake is known to make it to Karachi.

Apart from the fish, the lake contained rich flora and fauna while serving as a resting place for the migratory birds.

The demise of the lake is mainly due to the saline water pumped into the lake through drainage. This water is also causing the boats to dilapidate, leaving Mohanas with nowhere to go.

The residents are deprived of clean drinking water. It costs them Rs. 50 to buy a small drum from the city. Sometimes, they have to resort to using water from the lake, which is highly polluted and detrimental to health. The toxic concoction is making the women and children fall sick. The people are suffering from Tuberculosis, skin diseases, and eye infections-leading to blindness.

The dearth of income sources and basic facilities like water accessibility is causing many fishermen to move away. But the Mohanas cannot do that, as they know no other skill and have no education or places to live.

The lake that used to host a rich ecosystem has turned into a vast patch of cracked brown muddy slush. All that happened because the lake has become a dumping ground for industrial waste, thanks to the faulty engineering manifested in the Right Bank Outfall Drain (RBOD) project.

The government started building a network of channels in 1982 with the primary objective to carry saline water from Sindh canal’s irrigated northwestern areas to the sea in the North. The drain was supposed to absorb hill torrents from Kirthar and pump them into Manchar Lake and other natural reservoirs with non-saline water.

The experts were sure that the lake’s water would dilute the effects of the toxic wastewater. However, this presumption itself proved to be wrong. The project’s phases remain incomplete even now, becoming the last nail in the coffin.

Because of the incomplete RBOD-II (project’s second phase supposed to drain saline water from Manchar Lake into the Arabian Sea), the effluents are accumulating in the Manchar Lake. The project’s cost is being revised again and again due to multiple delays and the lake is getting worse with every passing day.

The Supreme Court also directed early completion of the entire project, RBOD-I, II, and III. However, to date, the situation has not brought any good tidings for the residents of the lake.