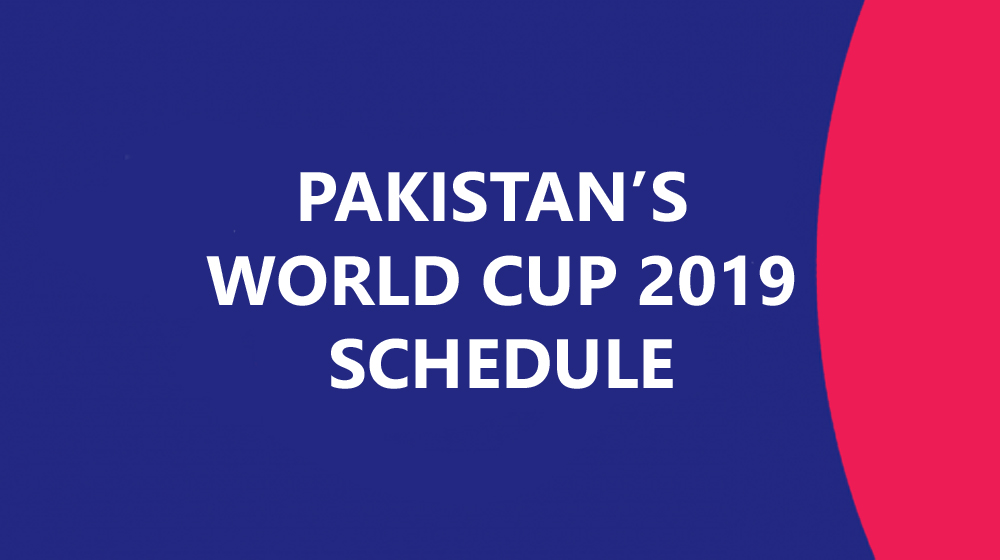 Pakistan will play its first match against the West Indies in Nottingham on 31st May 2019.

With the tournament set to be played on a round-robin format, each team will play against every other team once before the top 4 teams qualify for the semi-finals.

Pakistan will play two matches at Nottingham, two at London, and one each at Bristol, Taunton, Manchester, Leeds, and Birmingham.

Today, we have compiled Pakistan’s schedule for Cricket World Cup 2019.

Pakistan will begin their World Cup campaign with a tough match against a rejuvenated West Indies side. They have got the services of their senior men like Chris Gayle and Andre Russel and the mix of youth and experience makes this West Indies team a strong one.

Pakistan vs England at Trent Bridge Nottingham is not something Pakistani fans would want again and again considering Pakistan’s poor record at the venue. However, if Pakistani bowlers start clicking, no team is invincible. Pakistan failed to defend 341 at Nottingham in their previous match at the venue against England.

Pakistan will take on Sri Lanka in their 3rd fixture at Bristol. Pakistan last played an ODI here in the England series. The home team chased down 359 with ease, showing that Pakistani bowlers will have to step up if they are to restrict teams and defend totals.

The County Ground, Taunton will witness its third World Cup, having hosted matches in the 1983 and 1999 editions. The home of Somerset will likely provide good conditions for Pakistanis considering Azhar Ali has enjoyed a good run for the county in the One Day Cup, helping Somerset clinch the trophy a few days back.

The mother of all clashes – Pakistan vs India – will take place at Manchester where a large number of Pakistani and Indian expats reside. The Old Trafford stadium can host around 25,000 cricket fans and there will be a total of 6 fixtures at the venue including a semi-final. Manchester is particularly famous among Pakistanis for Saeed Anwar’s brilliant 113* to help his team storm into the 1999 World Cup final.

The venue for World Cup Final, Lord’s will host two of Pakistan’s league stage matches. The first match will be against South Africa. Historically, the Lord’s pitch always offers assistance to spinners and Pakistan have enjoyed a great record at the venue, especially in Test cricket. Reverse-swing will likely come into play considering the sub-continent type nature of the pitch.

Pakistan and New Zealand will lock horns at Edgbaston Cricket Stadium in Birmingham. The venue is likely to favor Pakistan with plenty of support from the expats who live here. The ground will also host one of the semi-finals.

The ground is remembered for the classical 1999 World Cup semi-final between South Africa and Australia. It ended in a dramatic tie as Australia made their way to the final where they defeated Pakistan to clinch the trophy for the second time.

Headingley, Leeds will host 4 matches at the mega event as Pakistan will meet Afghanistan as they will eye revenge for the warm-up defeat. The venue has hosted World Cup fixtures in 1975, 1979, 1983 and 1999.

The Home of Cricket will also host Pakistan s Bangladesh fixture before it hosts the mega event’s grand finale. The iconic cricket ground has hosted World Cup matches in all the events hosted in England i.e. 1975, 1979, 1983 and 1999. The first ever World Cup match in 1975 between England and India yielded the highest ever World Cup total of 334/4 by the hosts.

How far do you think Pakistan will go in the World Cup? Let us know your predictions.