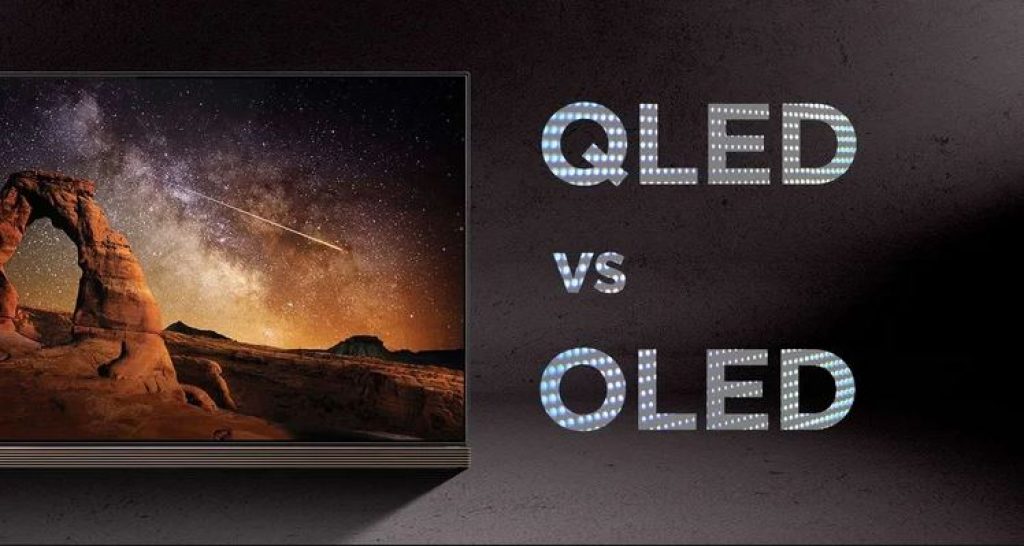 Which one should you go for? Is one better than the other?

When you’re out looking for a new TV or a monitor, it’s quite easy to get overwhelmed with the technical jargon and all the different types of TVs out there.

The most famous (and expensive ones) are OLED TVs, with great picture quality and contrast. That said, there’s a new type of display tech making waves these days called QLED. It’s still in its early days so not many people know about them.

While the names QLED and OLED do sound awfully similar, the two display panels are actually equipped with very different technologies. Let’s have a closer look. 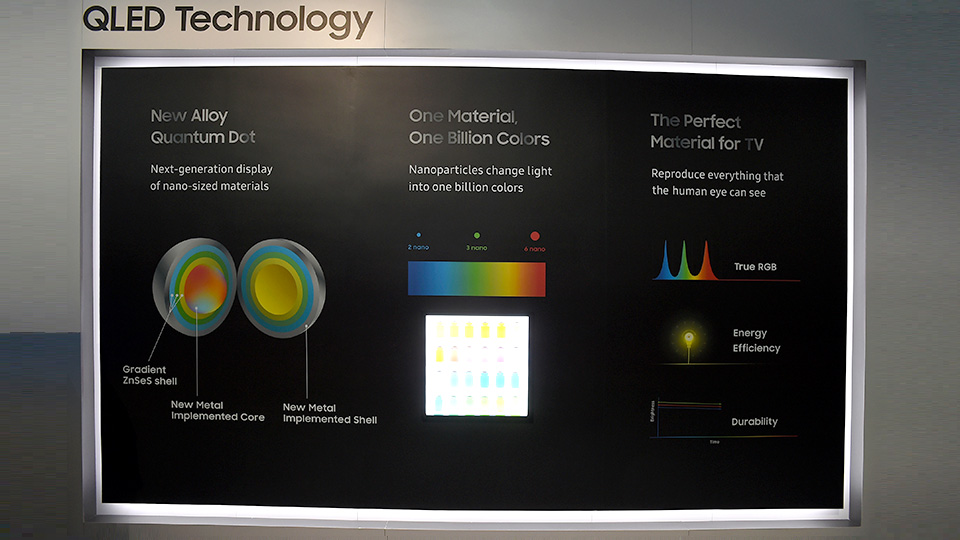 QLED stands for “Quantum Dot LED”. Although they do sound futuristic they’re actually based on regular LCD TVs (or LED-backlit LCD TVs, pretty similar) that we use these days. They come with a new Quantum Dot tech on board.

When light reflects onto the quantum dots they emit light which, as a result, improves color and light management. Regular LCD TVs come with a white backlight which is then filtered to produce different colors.

QLEDs, on the other hand, use quantum dots for lighting, eliminating the need for using a separate backlight. They also produce a brighter picture compared to regular LCD TVs.

Fundamentally, it is just an evolution of LCD TVs we’re all very well familiar with.

OLED displays, on the other hand, work on a completely different type of technology. It stands for “organic LEDs”.

OLED TVs are based on special organic material, with millions of tiny individual pixels. Each of these pixels lights itself up when a charge is applied to them. With each pixel lighting up a different color, depending on your need.

They use a lot less power than LCDs, which need a separate backlight to work.

There is no “better” option here when it comes to image quality. Both types of displays perform differently under different light settings so it all comes down to your setup and personal preference.

Their pixels can reach absolute black so they’re better when it comes to dealing with shadows or dark scenes. It might cause problems if you have a bright room with a window reflecting sunlight on your TV.

This is where QLEDs are particularly useful. Brightness is their strong suit and they perform ultimately better under bright settings. QLEDs can manage twice the brightness of an OLED, on average, so if you have a bright living room with lots of ambient light, then a QLED display should be your go-to option.

Overall color, resolution, video processing and other image quality factors are basically the same, with minor differences here and there.

OLED does have the advantage in contrast though, managing infinite contrast while QLED might be better at processing HDR thanks to their high brightness thresholds.

Viewing angles is something OLED consistently beats QLED at. OLED TVs are super thin and the light source is incredibly close and so you are able to view the image perfectly at any given angle. 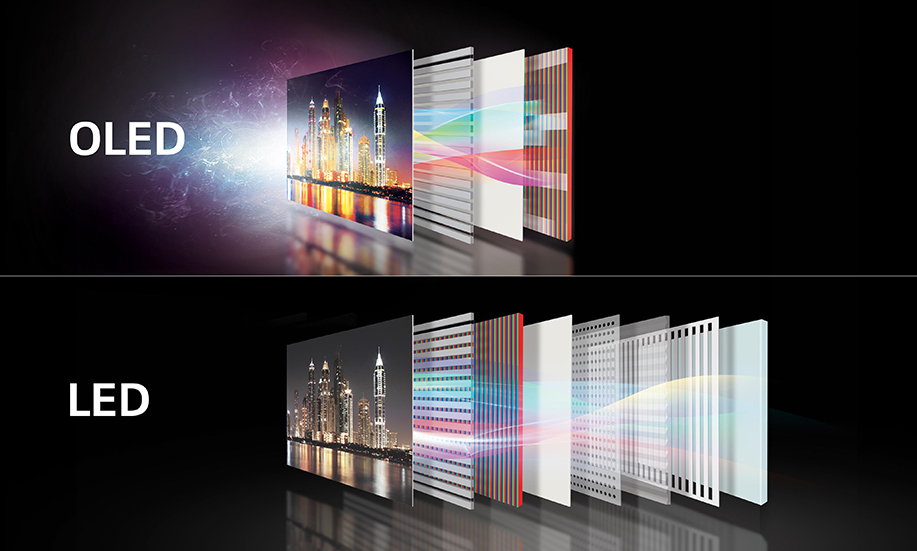 QLED, on the other hand, works on a transmissive technology which means light has to shine through a medium before it is displayed on the screen. Once you shine a light through something, you’re limited by angles. What this means is that QLED can’t match OLED in viewing angles as brightness and colors fade when viewed from off angles.

If you usually watch TV with your family, or in a group, then OLED wins this one. 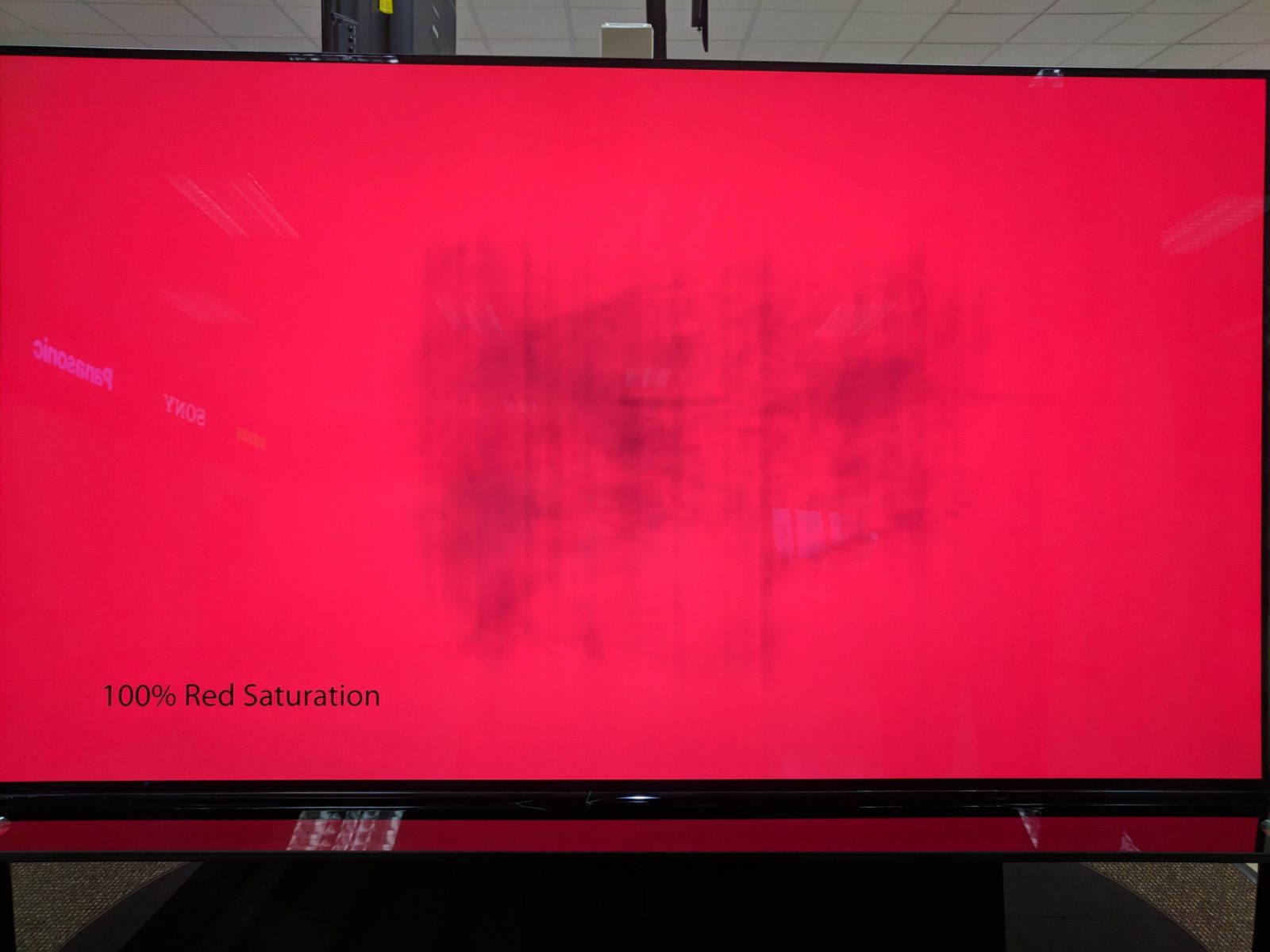 OLED displays do have an infamous burn-in issue. If they display a static image in the same place for too long, it leaves a ghostly afterimage that permanently stays there even if your TV is turned off.

For example, a news channel logo at the corner of the screen or a tiny map in one of your video games will burn in if the TV is on for an entire day.

But this is only an extreme case as people generally don’t keep the TV on for an entire day. Nothing to worry about if you don’t really go overboard with your TV usage.

In conclusion, there’s not much of a difference between the two in image quality. Even if OLEDs have better contrast, QLEDs have higher brightness and are generally cheaper to manufacture.

OLED TVs can suffer from the burn-in issue though, but it’s uncommon as nobody has their TV on all the time. Even then, it takes a while for the issue to surface.

Do note that this is just the start. We plan to compare the two display types in terms of brands and pricing in a separate article.