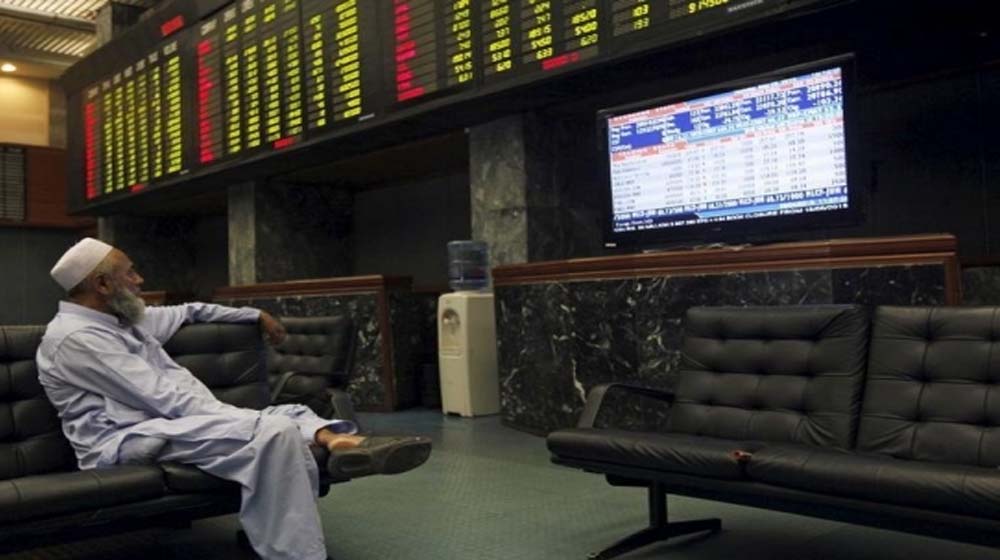 Over the past few decades, there has been an upsurge in capital market activity globally, mainly due to the emerging markets.

The capital market in Pakistan plays a crucial role in mobilizing domestic resources and channeling them to productive uses; however, its performance remained volatile during the period under discussion.

One of the best-performing markets in Asia couldn’t maintain its growth. It was once ranked the best market in Asia and fifth best-performing stock market in the world in the year 2016 by Bloomberg and was calculated to have provided a total return of 46 percent for the fiscal year 2017.

During the FY2019, the market saw huge volatility due to several major factors. However, due to political uncertainties and macroeconomic adjustments in the last two fiscal years, the impressive growth could not be maintained, with PSX-100 showing fluctuating tendencies. It fell by 7.8 percent between July 2018 and March 2019.

The index saw a rising trend after business-friendly policies were introduced in the mini-budget of January 2019 which gave some respite to the market and the index saw a rising trend for some time, though Indian incursions in Pakistani territories on February 26, 2019, and subsequent border tensions led to a decrease in confidence in the market, and the index closed in at 38,649 points on March 31, 2019, whereas market capitalization was Rs. 7,868.6 billion 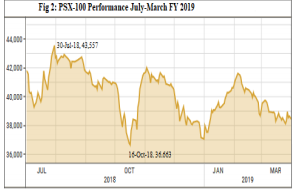 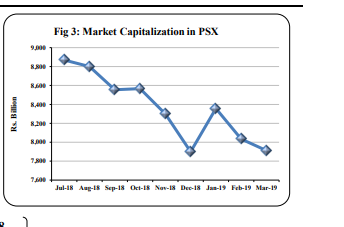 The total funds mobilized between July 2018 and March 2019 in the national stock exchange amounted to Rs. 22,350 million, as compared to Rs. 14,222 million in the corresponding period last year. This comprised of the capital of new listings totaling Rs. 1,467 million, debt amount listed totaling Rs. 14,000 million and right issues equating to Rs. 6,884 million.

Strong buying by local investors has shown the confidence of the investors in Pakistan equity market. Going forward it is expected that the market will move in an upward trajectory.

As of March 31, 2019, 120 corporate debt securities were outstanding with an amount of Rs. 888.24 billion. These nine months saw 10,865 new companies getting registered with the SECP, a growth of 30 percent from the corresponding period of last financial year.

Two new companies were listed with the PSX during July-April 2018-19, as compared to six companies in the fiscal year 2017-18.

Biggest IPO in PSX history by a Privately Owned Company

In March 2019, Interloop Limited successfully raised Rs. 5 billion through a largest private sector Initial Public Offering (IPO) in PSX history by listing 12.5 percent of its shares on the stock exchange, placing itself among the top 50 companies listed on the PSX by market capitalization.

Money Market held the second largest industry share i.e. 36.93 percent, followed by Income Funds with an industry share of 17.50 percent as of March 31, 2019.

The SECP has taken additional measures in this fiscal year to address the potential threat of money laundering and terrorist financing within its regulated entities and maintained the integrity of the financial markets.

In order to provide short-term stimulus to the stock market and arrest its downward trend, the Economic Coordination Committee of the Cabinet Division authorized the government to issue sovereign guarantee amounting to Rs. 20 billion for investment in National Investment Trust (NIT)-State Enterprise Fund.

This step would increase liquidity in the PSX and would woo investors to divert more investment in the market.

According to the latest economic survey, the performance of stock markets during FY19 presented a mixed trend between July and December, largely due to macroeconomic adjustments undertaken by the incumbent government to correct underlying imbalances in the economy.

The upsurge of the market which was starting to gain momentum was halted as uncertainty prevailed in the market because of the post-February 26 stand-off at the border with India escalating military operations.

However, a staff-level agreement has been reached with the IMF for a bailout program, which will help in restoring the eroded confidence in the market that would allow an increased interest in the equity and debt markets of the country