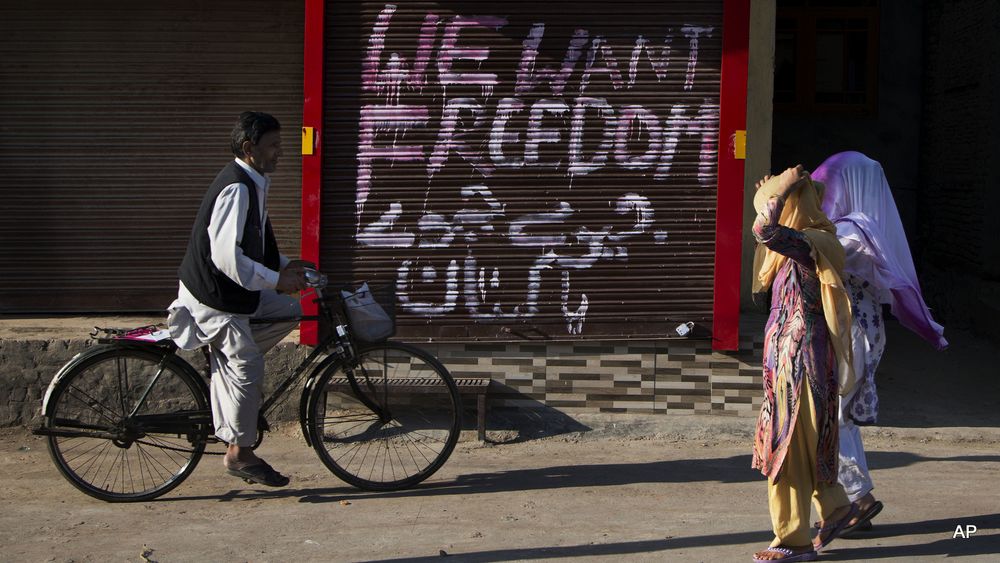 Amid blatant human rights violations, it would be right to call the Indian Occupied Kashmir (IOK) heaven on fire.

The war-mongering attitude of the Modi government has threatened the peace of the heavenly valley in clear violation of the United Nations Security Council resolutions.

What’s Going on in Kashmir?

According to the reports, around 40,000 troops have been posted in the IOK, Article 144 has been imposed and the local leadership has been put under house arrest. The educational institutes have been closed and the tourists have been directed to leave the region.

This comes in the wake of Donald Trump’s offer to mediate on the Kashmir issue, which has rattled the Indian government.

The local Hurriyat leadership has called on the United Nations and world leaders to intervene to save precious Kashmiri lives. Pakistan has also raised the issue with the United Nations Security Council. Reports have it that the Foreign Office in Pakistan is making efforts to seek Trump’s help in resolving the issue, otherwise, the situation will deteriorate further in the troubled valley.

The Indian Army also violated the ceasefire agreement as it used Cluster Bombs in Azad Kashmir, especially in Keran Sector in the Athmuqam district late last week. The cross-border firing has killed

As it seems, the Indian government is adamant to provoke Pakistan with such violations. Prime Minister Pakistan, Imran Khan called on the National Security Council meeting on Sunday where it was unanimously agreed to effectively respond to uncalled for Indian aggression on the Line of Control.

Article 370 Revoked: What Does it Mean?

All this is being done to revoke the special status of IOK, which safeguards the rights of Kashmiris. Indians could not buy property in Kashmir, the local government jobs were reserved for Kashmiris and the non-residents had no right to vote, however, this is about to change as India has passed the bill to abolish the Article 370 in a rushed decree by the Indian President. What it means is that the resolution doesn’t need any voting in Parliament and it will be directly implemented.

The security clampdown aims to restrict the resistance from Kashmiri freedom fighters as Indian Home Minister, Amit Shah, presented the resolution amid opposition’s backlash before the Parliament earlier today.

The security forces in the war-torn region have already killed more than 10 civilians in the recent crackdown. The troops are rallying on the streets of the disputed region, spreading fear among the locals. Indian government is trying to fully take over IOK before they are forced into talks for Kashmir’s freedom.

With Article 370 gone, Kashmir will no longer be a special territory rather it will follow the laws and regulations in place in the rest of India. Earlier, the region had its own Supreme Court, its own rules and whatnot, however, it will no longer be called a Muslim-majority autonomous region. With Indians able to buy property in the Himalayan territory, the anti-Muslim government wants to convert it into a Hindu-majority region by marginalizing Muslims.

The Indian media is feeding ordinary citizens with lies that the territory once belonged to Pundits and that they were thrown out of the region by Muslims. However, 2-3% of Pundits population controlled the territory without even having a majority.

In the last two to three days, the social media platform Twitter’s all top trends have been on the Kashmir issue. Today’s top 5 trends in Pakistan are #StandwithKashmir, #Article370, #KashmirHamaraHai, #KashmirParFinalFight, and #UNandOICsaveKashmiri.

Strongly condemn this coward act of inhumanity and illness. World should open eyes and to stand with innocent kashmri people. #StandwithKashmir pic.twitter.com/2GBHnKkXaH

Indians are still being fed lies and fake news.

Kashmiris only want their right for self-determination.

The world has turned a blind eye towards oppression by Indians.

The situation is worsening further.

These are some strong words.