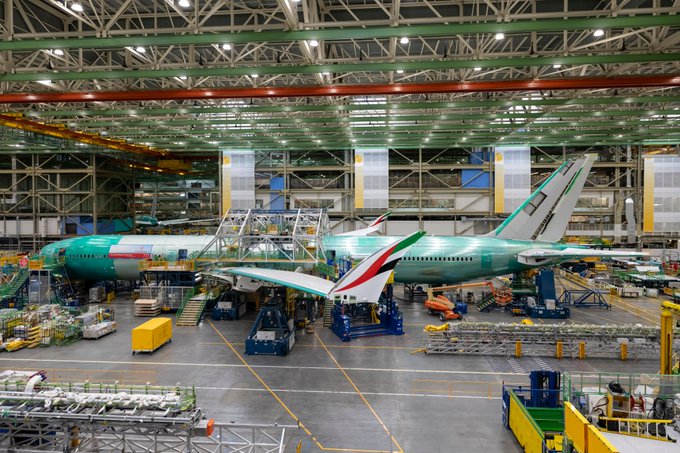 Emirates Airline has unveiled the first images of the futuristic Boeing 777x airplane being produced for the airline.

The UAE’s national flag carrier tweeted the images of the new aircraft, which is being manufactured at the Boeing Everett factory in the US and is expected to launch next year.

In the tweet, the airline said, “We’re proud to see the UAE flag for the first time on the Emirates Boeing 777X”.

On the first day of the 2013 Dubai Air Show, Emirates confirmed an order for 150 777Xs, making it the largest single order in the world for a new airplane model. In fact, the agreement was nearly 50% of the 334 orders for airplanes worldwide.

However, in June, the company announced that it was in contact with Boeing for revising the order and replacing some of the 777Xs with the smaller 787s.

The Boeing 777X will go under stringent testing this year before its expected roll out in June next year.

Total body workout! This week’s #777X ground testing includes several rounds of low speed passes down the runway as our
teams verify the operation of integrated airplane systems and software.

Boeing uploaded a short video on Twitter this week, teasing the interiors of the 777X and 787 Dreamliner.

We design our airplane cabins so that you fly in style and comfort. See what you can enjoy onboard the new #777X and 787 #Dreamliner. pic.twitter.com/USt08C9lsq