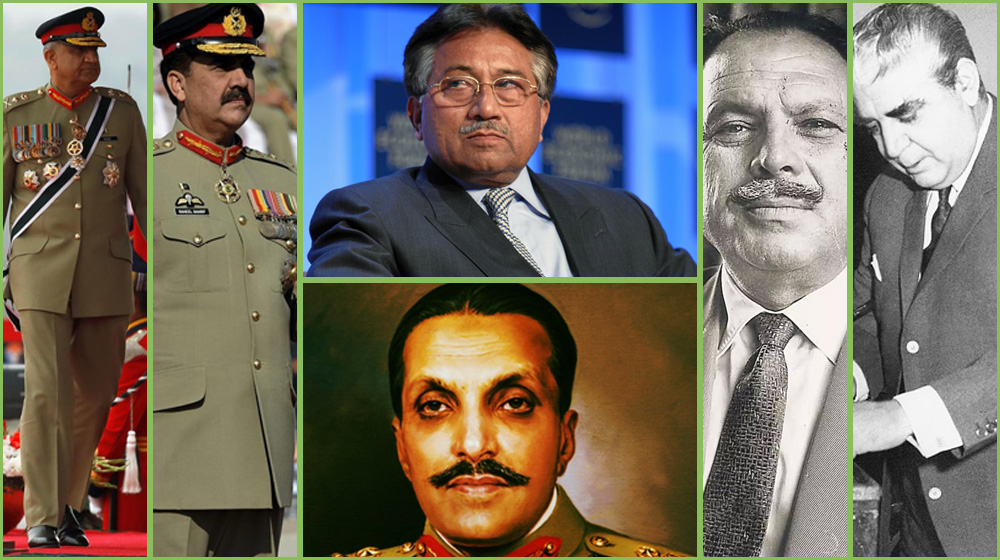 Prime Minister of Pakistan, Imran Khan has provided a three-year extension to the Chief of Army Staff, General Qamar Javed Bajwa. The Army Chief was set to vacate the post in November this year after completing his 3 years as the top General.

General Bajwa is the 16th Army General to serve as the Chief of Army Staff. Until 1972, the post was called as Commander-in-Chief of Pakistan Army.

We have compiled a list of all Army Chiefs from 1947 til now for our readers. Let’s have a look at all the Generals who held the reigns of Pakistan Army.

Frank Messervy was a British General who took charge of Pakistan Army after independence and served as the first Commander-in-Chief till February 10, 1948.

Following Sir Frank’s tenure, another British General, Douglas Gracey took the reins of Pakistan Army as Commander-in-Chief. He took oath on February 11, 1948, and ended his term on January 16, 1951. He was succeeded by first native Pakistani General, Ayub Khan.

He was the first Pakistani to serve as the Commander-in-Chief of Pakistan Army and later became the first Army General to serve as the President of Pakistan. He was only 43 years old when he was elevated to spearhead Pakistan Army. When President, he promoted himself to the Field Marshal rank and occupied the post of Army Chief for a period of 7 years. His tenure came to an end on October 27, 1958.

The longest-serving Army General to hold the post of Commander-in-Chief, General Musa Khan commanded the Pakistan Army for 8 years starting from October 27, 1958, to September 17, 1966. General Musa was the Army Chief during the 1965 Pakistan-India war.

General Yahya Khan took over the post of Commander-in-Chief from General Musa Khan in 1966 and stayed on the post for 5 years. He became the President of Pakistan in 1969 till December 20, 1971. General Yahya was the last C-in-C of unified Pakistan.

Lieutenant General Gul Hassan Khan remained the Army Chief for a brief period from December 20, 1971, to March 2, 1972. He was the first Army Chief of [West] Pakistan after the separation of Bangladesh.

General Tikka Khan was the first Chief of Army Staff, assuming office on March 3, 1972, and stayed in office for 4 years. He vacated the post on March 1, 1976, and he was the third-oldest Army General to lead Pakistan Army at the age of 57 years and 8 months.

General Zia-ul-Haq became the Army Chief on March 1, 1976, and following a military coup, he took over as the 6th President of Pakistan. He overthrew Zulfiqar Ali Bhutto by declaring martial law in 1977 and became the Head of the State in 1978. He died in 1988 in an infamous plane crash.

General Mirza Aslam Beg of 16 Baloch Regiment was appointed as the Chief of Army Staff following Zia’s plane crash in 1988. He stayed in power of the Army for 3 years and retired on August 16, 1991.

Born in Chakri near Chakwal, General Asif Nawaz belonged to 5 Punjab Regiment of Pakistan Army who served as the Army Chief for less than one and a half year. He died of a heart attack under mysterious circumstances at the age of 56.

The Army General from 5 FF Regiment, Abdul Waheed Kakar was chosen as the COAS after General Asif Nawaz’s sudden death. He completed his three-year term on January 12, 1996.

General Jehangir Karamat was another decorated General with awards like Nishan-i-Imtiaz (Military) and Tamgha-i-Basalat to his name. He was entrusted with the role of COAS on January 12, 1996, and his term ended on October 6, 1998.

Another martial law administrator, General Pervaiz Musharraf stayed as Army Chief for 9 years. He was preferred over General Ali Quli Khan and General Khalid Nawaz Khan by the then Prime Minister, Nawaz Sharif. He later overthrew him and assumed the office of the President of Pakistan from June 2001 to August 2008.

General Ashfaq Pervaiz Kiani served as the Army Chief for six years after he was awarded an extension of three years on completion of his first term in November 2010. He was also conferred with awards such as Nishan-i-Imtiaz and Hilal-i-Imtiaz.

General Raheel Sharif is the brother of Nishan-i-Haider award winner, Major Shabbir Sharif who embraced martyrdom in 1971. Raheel Sharif was chosen as the COAS on November 29, 2013.

Born in 1960, Qamar Javed Bajwa succeeded General Raheel Sharif in 2016. His first term is set to complete in November 2019, however, he will stay as the Army Chief for another three years. He has also won the Nishan-i-Imtiaz and Hilal-i-Imtiaz for his services to the country.

Who do you think has been the most powerful Army Chief? Let us know in the comments section.