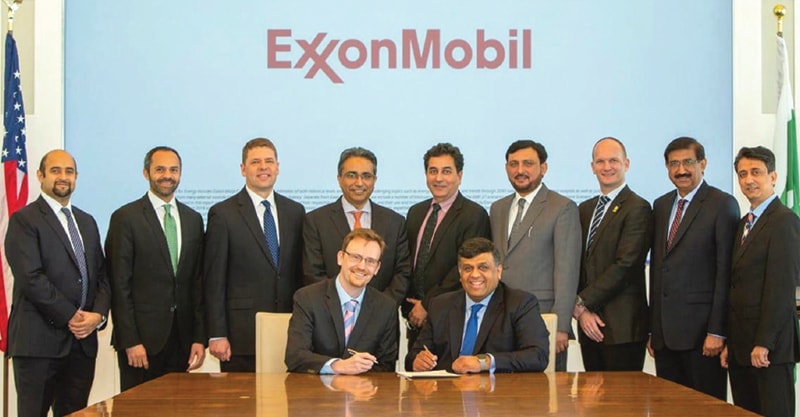 ExxonMobil, the world’s largest oil and gas company, has signed a gas supply agreement with a Pakistani energy company, Universal Gas Distribution Company (UGDC), in Houston (Texas) for the import of private LNG for the first time in Pakistan.

After the agreement, the first shipment of LNG is expected next month which will change the entire gas supply landscape in Pakistan, said a statement issued by Petroleum Division of the Ministry of Energy.

The agreement was signed in Houston by Vice President of ExxonMobil Richard Rayfield and Chief Executive of UGDC Ghiyas Abdullah Paracha and witnessed by Special Assistant to the Prime Minister on Petroleum Nadeem Babar. A large entourage of the government is currently in the United States to attend an annual LNG conference.

ExxonMobil is the first company to get a private gas marketing license in Pakistan.

Speaking at the event, Nadeem Babar said that this is a historic day as ExxonMobil has decided to invest in Pakistan after 20 years. He said that businessmen would be provided an enabling environment according to the vision of Prime Minister Imran Khan.

“The deal is an honor for Pakistan and we will ensure ease of doing business to promote investment in all the sectors including the energy sector,” he said.

Investment by ExxonMobil will also propel other energy companies to invest in Pakistan which will bring down gas prices to help the masses and the environment.

We have decided to invest in Pakistan after two decades with a vision to provide economical and environmentally friendly gas to consumers on a regular basis. We will support UGDC so that it can overcome the shortage of gas in Pakistan.

Ghiyas Paracha said that the government has changed third party rules to allow the private sector to import gas. “Now we will be able to buy surplus gas from terminals and also buy the fuel from five upcoming terminals which will revive the CNG sector,” he said.

He added that this move will increase parity between the price of CNG and petrol. The fares would be reduced and $1 billion of foreign exchange per annum would be saved. This will revive the CNG sector in the country. Moreover, two million vehicles would be converted to CNG, attracting foreign investment for import of CNG kits and cylinders.